Today we look at flagship fitness trackers from the company Fitbit. Looking ahead, it is worth to say, that some functionality Fitbit Surge goes beyond the tracking of daily physical activity, and as a novelty in common with intelligent, and with sports watches. Just how well Fitbit managed to combine these features in a single package, read this review.

You might pay attention to the cost of the device, yes, it is high; expensive gadgets – expensive packaging, and here Fitbit Surge okay. He coped with a non-trivial task of unpacking, within a user detects clock cable to charge and sync the nano.

The Fitbit Surge easily recognizable product Fitbit, moreover, even the texture of the coating similar to that of the already familiar to us Charge . Watches on sale in three colors – black, orange and blue. Black version, visit the testing, as well as the already mentioned his younger brother on the line, can hardly be called a practical choice, but it is in this version will be better Fitbit Surge combined with a variety of clothing styles and, unlike the others, it would be appropriate in most cases. Watch looks stylish, but at the same time restrained, at least here glossy elements. The shape of the clock more like a bracelet, marked the transition from the strap to the body is not here.

Fitbit Surge On hand does not look bulky, even elegant and subtle wrist. Covering the body, as we have seen, like Charge: rubber texture in the form of a fine mesh perfectly collects dust on himself, but also to clean without any problems. In general, Fitbit Surge got quite an interesting characteristic of the product design company, through which the clock will be appropriate and in the gym, and in conjunction with a business suit that showed, for example, Barack Obama, being occasionally seen with this model hours.

Like other fitness trackers company, Surge sold in several sizes bracelet. Not to be mistaken with the choice, be sure to use the appropriate instructions on the official website of the company. As is the case with Charge HR, you need to bear in mind that to properly monitor heart rate during workouts manufacturer recommends to fasten the bracelet slightly above the wrist, for which you should have a noticeable slack. 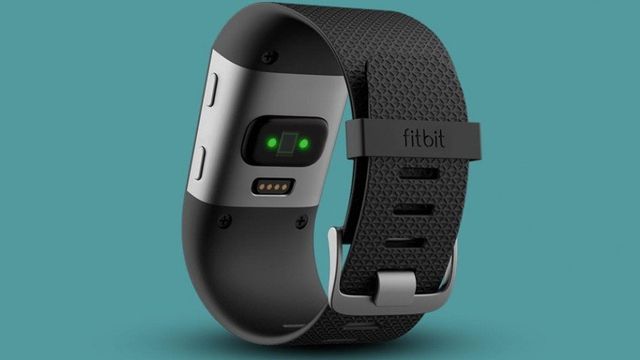 The strap is made of Fitbit Surge enough light and elastic rubber, smooth internal coating, which adds to the comfort when worn around the clock, but during exercise and other active movements clock periodically slipped to the brush, which, of course, affect the accuracy of heart rate measurement. Fitbit Surge get used to wearing quickly, there is no discomfort in the first few minutes of use, and in the following days. Not excluded cases of allergic reactions characteristic of the material used Fitbit, however, subject to the rules of hygiene and the recommendations of the manufacturer’s problem is unlikely to arise. It’s worth noting that the watch is waterproof, but the manufacturer strongly recommends to remove the device before a shower or swimming. The most that is capable of moisture protection – this confrontation sweat and light rain.

First of all it is worth noting the main difference from the Fitbit Surge Charge – display. Watch received a small monochrome display, which is very positive impact on the readability of the information on a sunny day.By the way, the display is a touch, thanks to gestures to navigate the menu to confirm / cancel actions or return to the previous screen using mechanical buttons on the sides. Also, the display is backlit in blue, which is only activated in low light conditions, thanks to a light sensor. Among the most important sensors in the asset Fitbit Surge are: accelerometer, gyroscope, digital compass, GPS, heart rate monitor, which will be discussed separately. For notifications using the vibration motor. The latter function is represented by basic features: notifications of calls and SMS, and during a call displays a caller’s name and a message is received, you can read its contents. However, all this is possible only if the caller’s name or text messages written in Latin characters, support for Cyrillic characters, due to the lack of localization, no. If you own a smartphone running iOS, it is available for you to control the music player. 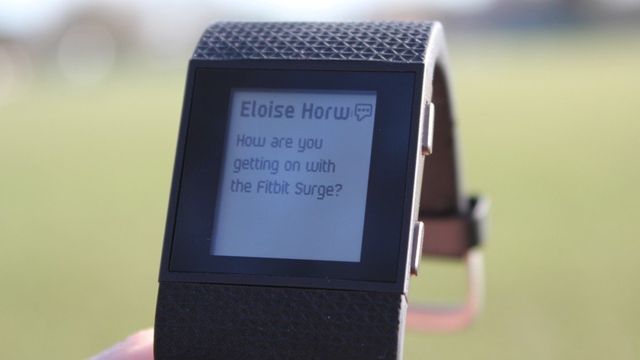 Watches are equipped with non-removable battery, which is enough capacity for a week of work, provided the disabled GPS. When using the connection with the satellite autonomy is reduced to a maximum target of 5 hours which is enough, for example, for running a marathon – it is quite a good result for the modern sports watch, given the level of equipment. Frequency of use of the backlight, notifications also affect the life of the device. For a week of using the clock has been fully charged once and were additionally connected to a PC for 10 minutes to adjust, on the sixth day the charge was about 10%. During this time, the clock several times used for cardio outdoors with GPS enabled and strength training room, as well as a daily alarm to sound, and has enabled notifications. However, Fitbit recommended to put the clock briefly charging every 2-3 days to one day not to be a non-working device at hand. 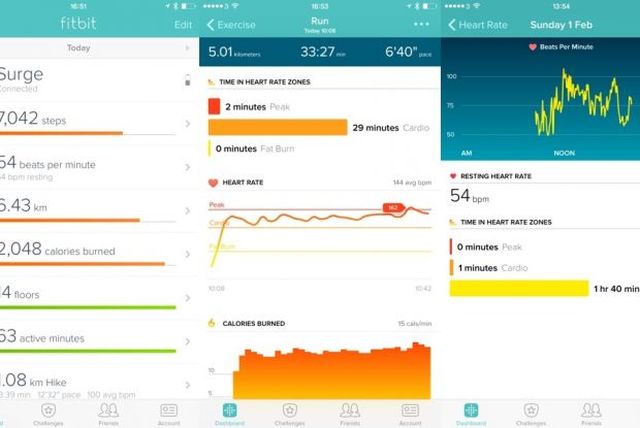 Fitbit Surge: Multisport and other functionality

Thanks to an extensive list of sensors Fitbir Surge can track different types of physical activity, both indoors and outdoors, which was implemented at the software level. Among the possible scenarios have both strength training (and, depending on the intensity of this exercise can be with her weight), and lifting weights. Among kardionagruzok user can monitor run outdoors on a treadmill, an ellipsoid and cycling.The last point, by the way, was added to the firmware a few days ago. During training, the device shows the main indicators – the stopwatch and heart rate, depending on the type of physical activity, the data set can vary, for example, during walking and running it may be the current rate and the average rate during cycling – the speed and during resistance training additionally calories.

However, the amount and type of data displayed, you can change your profile via the web interface Fitbit.Unfortunately, the device is not suitable for the triathlon, there is no functionality for this, nor an appropriate level of autonomy.

But it does not stop fitness opportunities Fitbit Surge. In addition to the fairly good hardware equipment, the company offers its customers Fitbit still ample opportunities for software diary diet and exercise, setting goals and methods of achieving them, for example the passage of a certain number of steps per day, or weight loss to a certain value. All this is available when creating a profile on the website of the manufacturer. 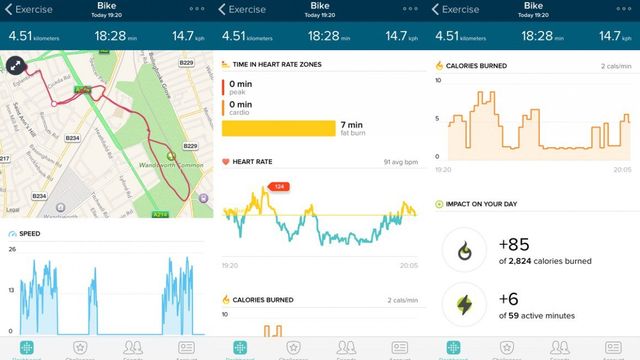 Like bracelets companies, Fitbit Surge has the ability to monitor the quality of your sleep, and it is done automatically, without any prior procedures. Intelligent alarm functions, there is only the option awaken you in a strictly specified time using vibration.

In fact, tracking physical activity – it’s only a small part of the wide range of opportunities, Fitbit give users a powerful tool to bring their way of life back to normal due to sports, recreation and a healthy diet. The application for the smartphone allows you to enter the name of the consumption of foods and their calorie content, and for your convenience, you can scan the bar codes of goods. Unfortunately, the software is not localized, that appears not only in the absence of Ukraine in the list of supported countries and languages, but also a “misunderstanding” Ukrainian barcodes.

Fitbit Surge features a built-in optical heart rate monitor, and the quality of the measurement of heart rate here is, unfortunately, on the same level as that of the model Charge HR. Even while following all manufacturer’s recommendations regarding the true figures could be obtained only at rest. During sports watch periodically crawled to the brush and correct tracking pulse interrupted. Moreover, in such cases, Fitbit encourages slow down, calm down a bit and then the heart rate monitor will be able to catch the correct rhythm. However, in this case no longer is a question of monitoring the heart rate in real time, and is likely to end approach, for example, during strength training, you will not get reliable data. The situation is complicated and sweating under all conditions. On the other hand, the software allows you to configure the individual pulse zone indication when passing from one zone to another.

Fitbit have turned out good competitor recognized leaders of the segment. And sports watches Fitbit Surge quite well both as the clock fitness tracker and companion for training. Disadvantages here are similar to the Charge – excellent level of equipment is not always modified software. Given the high cost, can only recommend the Fitbit Surge in if you love stylish accessories and you need a functional GPS-tracker for training outdoors. If you are interested in the control of heart rate during exercise – we recommend to look at the model of a classic wireless pulse belts. And if you are interested in measuring the pulse at other times, it is recommended to pay attention to Charge HR – he copes with it. 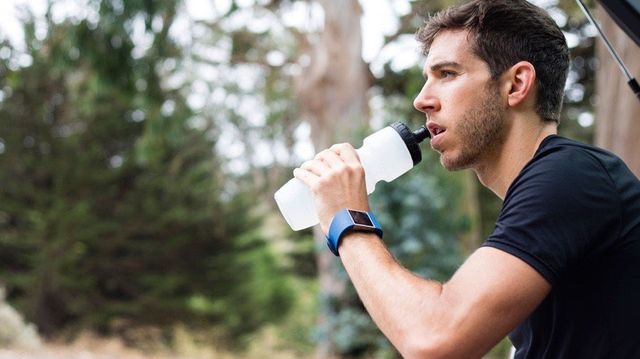