Today we introduce a new tablet Lenovo Yoga Tablet 3 8. This is the third generation of tablet Lenovo Yoga. It is based on energy-efficient Qualcomm Snapdragon processor 212, paired with a battery capacity of 6200 mAh, they create an interesting tandem. First things first, we describe in this review.

The tablet Lenovo Yoga comes in two-color cardboard box. Inside is a battery charger for 5 volts and 1.5 Ampere, USB cable and paper documents – a set of quite standard.

Tablet Lenovo Yoga family have always been an unusual design. In the third generation of cardinal changes in appearance can be expected, but there is little innovation. Dimensions 210x146x7mm up, and weight – 472 grams. As you can see, the tablet Lenovo Yoga can not be called compact. 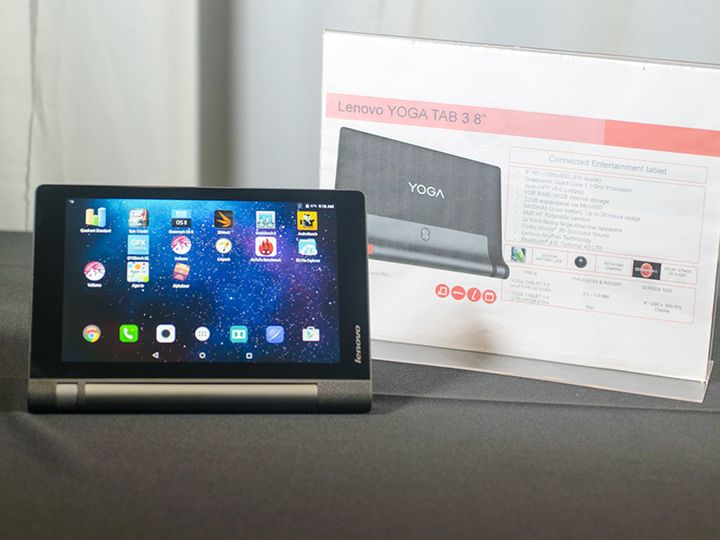 Compared with previous generations, these figures have not changed.

The front side tablet Lenovo Yoga of the protective glass plate covers without oleophobic coating. Also located on her stereo. Frame around the screen is quite wide.

The power button is traditionally integrated into the end of the cylindrical portion. But the volume button is on the top. Next to it is a port microUSB. On the bottom 3.5 mm audio jack and a microphone. Do not forget about slot for memory cards format microSD. It is placed under the stand.

Unlike previous generations, for the opening stand now need to press the button, and will stand at a slight angle. It is very convenient, but unfortunately, the button does not always work the first time. Stand very very comfortable in everyday use. Through hard hinge it easy to hold the plate on the table. 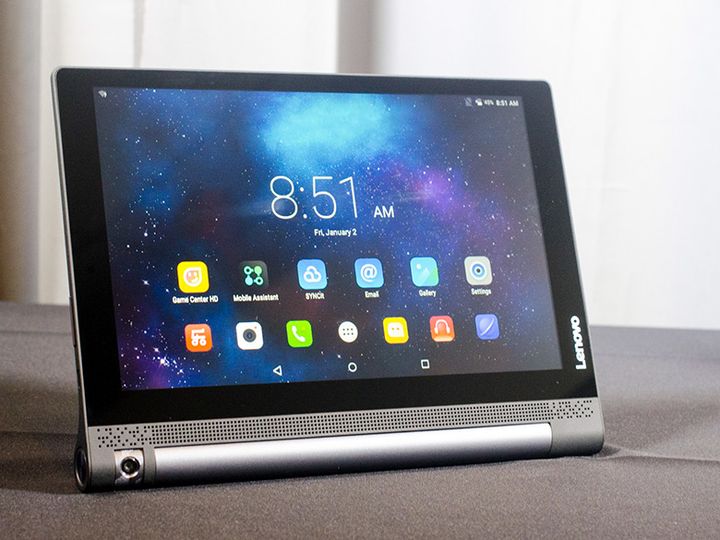 The plastic on the back of a nice touch, but he gathers himself typos, and wipe it very difficult. Do not forget about the mechanical part of the camera. Fans will appreciate the self, will write more on this below. The work was done by a small, but the device was in many ways more convenient.

According to the results tablet Lenovo Yoga of measurements at low brightness the screen is “cold.” But if the brightness is higher than 40% of color are a little warmer than necessary. Also worth noting is that the blue, green and red color does not hit the point of the color space sRGB. This means that the 100% screen can not be trusted. Subjectively, the color saturation is not enough, the picture looks bleak.

Outdoor display does not behave in the best way. Under direct sunlight and do enjoy a very difficult due to the lack of anti-reflective coating. 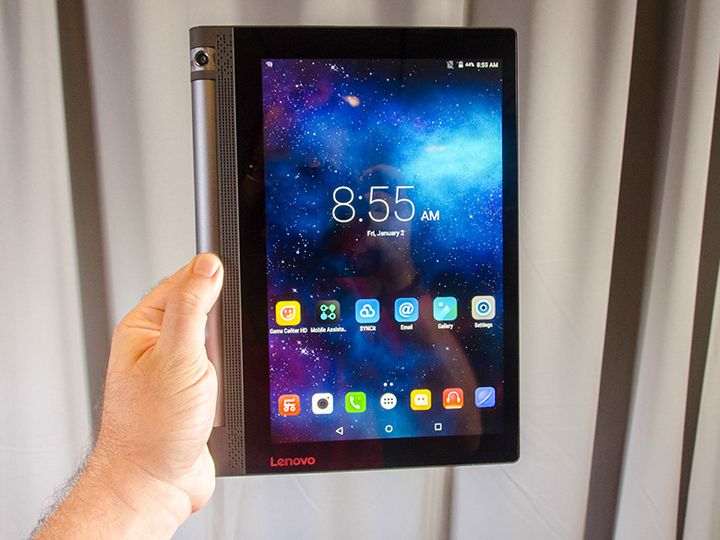 This tablet Lenovo Yoga uses the technology AnyPen, which turns into an ordinary stylus pen or pencil. Recognition taps fairly accurate, but does not hurt any such use of the screen is not clear.

For high-quality sound in the plate correspond to the two speakers located on the front side. They support the technology Dolby Atmos 3D. In reality, the hands-free speaker. They provide volume, detailed sound. With this watch movies on it comfortable.

The tablet Lenovo Yoga  is running Android 5.1.1. The interface is as close to stock Android Lollipop. Although not very powerful stuffing, the device runs smoothly and fast.

In the depths of the tablet lies a modest CPU – Qualcomm Snapdragon 212 (APQ8009). It consists of four Cortex-A7 cores clocked at 1.3 GHz. The video card acts as Adreno 304. The amount of RAM is equal to – 1 GB built-in – 16 GB expandable by using memory cards microSD. Of the 16 GB of internal memory is available after the first inclusion of 10.97 GB. The amount of available memory after the device is 473 MB. There is support for OTG. 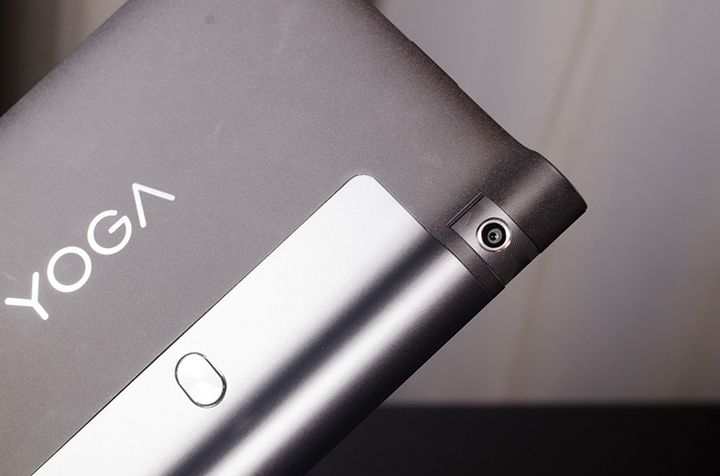 The results tablet Lenovo Yoga are not encouraging benchmark number of points. But despite this performance is sufficient for simple arcade toy. But fans demanding games this tablet will not do. Play Modern Combat 5 and FIFA 16 can be, but is much larger subsidence fps.

Wireless modules are Wi-Fi standard IEEE 802.11 b / g / n, Bluetooth 4.0 and GPS. All of them are well in operation. We visited on a review of Wi-Fi version, but there is a LTE version.

Another change with respect to the second generation of a camera. Now it can be rotated around its axis. The rotation is the characteristic clicks. This mechanism is easy to use. The design looks quite solid. 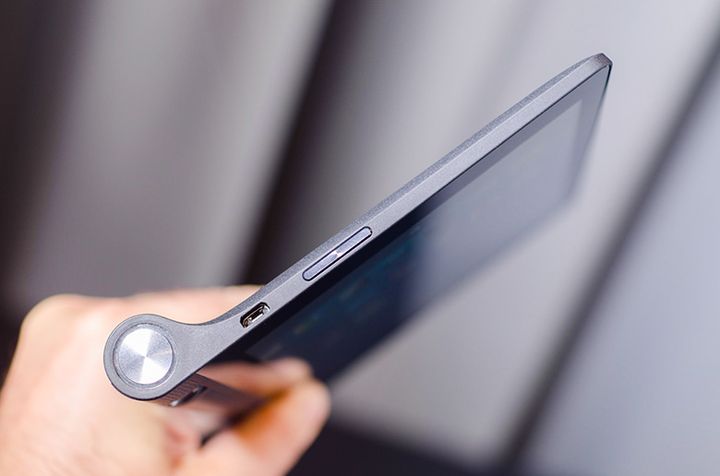 The camera tablet Lenovo Yoga has a resolution of 8 megapixels and has autofocus. Video recording can be done in HD-resolution. The camera has a simple interface. The picture quality is quite good, both for the tablet.

Hours is a special pride tablet Lenovo Yoga Tablet 3 8, but first things first. Because of the traditional Yoga as a tablet design, located inside the cylinder battery capacity of 6200 mAh and the capacity of 23.2 Wh. And if you remember that the screen resolution of all HD, and the processor is not the most voracious, as a result, we need to get a very decent time. 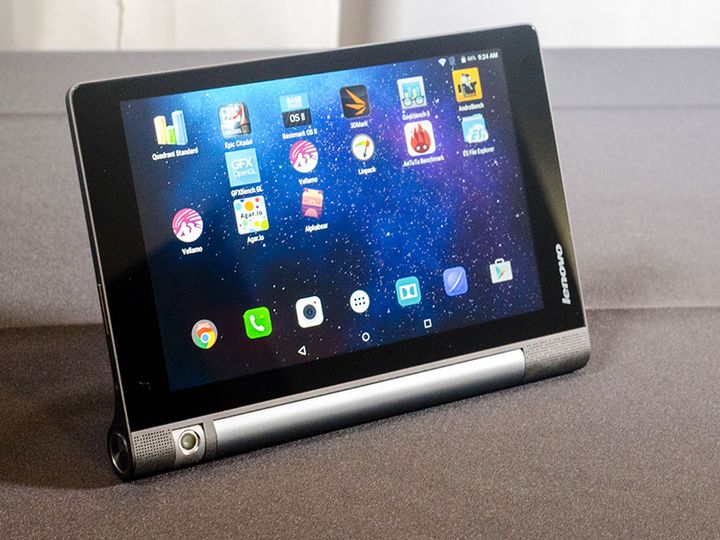 In the PCMark benchmark test at Work battery life tablet already lasted 18 hours 7 minutes. In the mixed-use achieved almost 11:00 the active screen, most of the time he used to watch the video. In addition, we conducted several tests of autonomy and recorded the results in a table:

In our time, we should not forget about the cost of the device. At the time of writing the price of the device is $ 250. 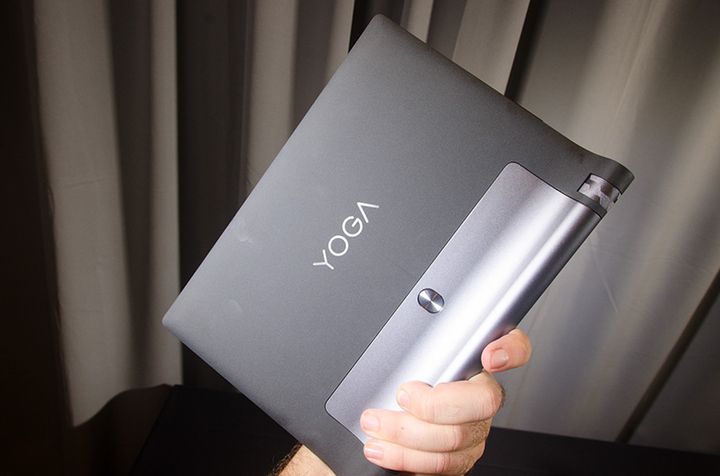 The tablet Lenovo Yoga Tablet 3 8 is a good choice for those who want a tablet primarily for browsing, reading books and watching videos. Do not forget about the long battery life, as on the parameters of the device proved to be just fine. But for those who like to play demanding 3D games tablet is hardly suitable as accelerator is not able to provide a comfortable number of shots during the game.