Recently, Hi-Fi-industry is experiencing increased interest in solutions such as “all-in-one” – even now sometimes projectors are equipped with built-in speakers. What to say about television and the efforts of manufacturers to provide them with more or less decent sound. And this despite the fact that broadcast HD-TV provides full digital surround sound format Dolby Digital.Nevertheless, buyers are increasingly tend to favor the soundbar or sound stand against the use of which we have no objection – in cases where there is no ability or desire to build a real multi-channel speaker system. Of course, this approach requires the purchase in addition to the speakers also AV-receiver as well as a pretty serious effort to install components of DC, but the pleasure of screenings at the same time seriously increase.

Small and stylish theatrical speakers today are nothing new, but unlike many mass-market offerings in these components made every effort to ensure high quality sound. Rounded speaker enclosure made of a polymer fiber-reinforced composite material; from the subwoofer is used for this thick MDF almost two centimeters. At four-inch midrange speakers and subwoofer radiator – aluminum diffusers; dome tweeters inch – soft. Speakers are designed for relatively high power amplifier.

After auto calibration generated AV-receiver set RBH CTx 5.1 creates quite massive and elaborate acoustic space. The subwoofer has a strong support in the low-frequency sound range, while remaining invisible as a source of bass. The final battle scene in “Avatar” look with great emotional stress – a convincing feed soundtrack contributes involvement in what is happening on the screen. Detailed sound, motion effects are easily tracked – for example, arrows clearly flying over your head, and walking gait manipulators shakes the floor under your feet. At high volume does not appear stiffness HF or other distortions.

Satellites can be hung on a wall or ceiling with suitable fasteners (RBH in stock available) or set on a microphone stand – for both options provided specially prepared holes. Center channel speaker can also be placed on a wall or placed on a rack. When you install should ensure that their acoustic axes were aimed at viewers zone.

Dialogues articulated, natural, expressive, although sometimes it a bit “cramped” in the frontal plane. In the scene where the blue-skinned Na’vi avatar Grace trying to revive their songs sound melodic and rhythmically, and the voice of each character come into focus convex emerges from the crowd. 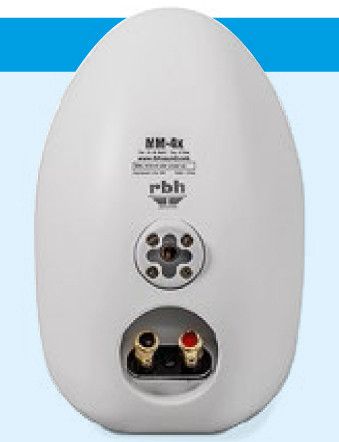 Off-screen music in the film is not annoying and tiring, as sometimes happens with other sets, and contributes its share in empathy and pleasure. Pleasant to listen to the catchy songs of ABBA in “Mamma Mia! ‘, Will not disappoint and execution of the concert, recorded on DVD Jacques Loussier Trio. Play Bach … and more.

If you do not want to watch movies with virtual and real surround sound, but do not tend to clutter the room large columns, you should pay attention to this set of RBH CTx 5.1. At a relatively reasonable price, it provides high-quality playback of soundtracks, including music, as well as flashy, but looks solid.

Cons: Nothing – for this type of speakers

Verdict: If you plan to watch a movie with full playback of multichannel soundtracks, but do not want to clutter the room, we recommend you look at this set