is the “ground” a vehicle powered by a steam engine. Built Dutch design company Revatu, two-wheeled locomotive is fully functioning bike and although it is somewhat slow.
Although design specialist Rene van Thuile, owner Revatu, is making no effort to hide the fact that inspired him to such a title for his latest creation, is clearly Design 2011 Colby Higgins, who is likely to ignite more than one creative flame in the soul of inventors and just engineers. Called Train Wreck Bike, 3D-model of the artist-designer Higgins was born, as he delved into his “admiration for old-fashioned mechanics” and gained considerable fame for his works. 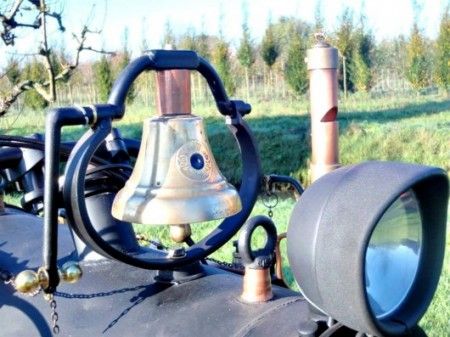 Staying true to the design of Train Wreck Bike, Van Thuile built motorcycle, inspired the creation of which, obviously, he drew from all sides. The very same on their own use of the steam engine makes it highly unusual means of transportation, but the appearance that allows to come to the confusion of who the first time without information training look at this, too, is unique of its kind – an external crankshaft torque wheels, straight- still it seems removed from the mini-locomotive.
Adding a call and even more steam horn enters into a stupor of people with a conservative mentality. It is difficult to imagine what emotions would test Sheldon Cooper if he had a chance to see how mocked the idea of a locomotive guys from Holland.