Nowadays, virtual reality can be considered the most dynamically progressing region which has made rapid leap forward in the past few years, in particular towards ensuring the possibility to feel anything other than visual images. First it was the breath of the wind, the warmth of the fire, and then joined the smells, but it still does not compare with the ability to feel the mechanical effect on your body. After all, without it, our ability to actually feel what we see in virtual worlds, remains limited – especially in the consumer segment where buyers sometimes so vzysktelny that can not help recalling the monologue comedian SK wireless Internet on board an aircraft. But a team of engineering students at Rice University is trying to solve this problem through its haptic gloves, allowing you to feel the virtual objects and the environment they are actually there.

Glove Omni designed for gamers who are already familiar with the VR- specializing in manufacturing technologies for gaming company Virtuix – known for its line of products Virtuix Omni. Just this company and sponsors work for the conversion of the prototype into a commercial product. Right now it is – just a prototype as whatsoever. “What have we done? This glove, which uses air to inflate the special pillows under your fingers, “says a student of mechanical engineering Thor Walker. “Thus, you can pick up something in a video game, and when you reach out and grab the virtual object, there is the feeling that you actually have the object in your hand.” 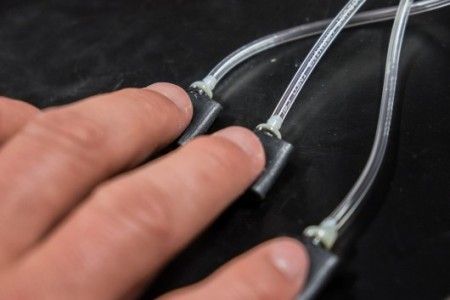 The glove is worn on your right hand and works without any external wires or cables. So far, attention techniques deprived the little finger and ring finger, and the emphasis in favor of the most commonly used, but soon it promises to fix.