On the functional notebook convertible into the tablet, and say nothing. Clearly, it’s incredibly easy to use. Of course, after the Dell XPS 12 with a similar mechanism of transition from one mode to another, Acer Aspire R 13 have to try to impress. Transformation in the laptop display involves rotating swivel Ezel Aero. This successful reception possible, and will lead to success this device. Especially since he left, there are other advantages, such as high-resolution display and the display cover and protected by a durable glass Gorilla Glass 3.

The notebook Acer Aspire R 13 does not look just lovely, probably closer to say, effectively, despite the use of gray and black. The glass cover, matte surface with plastic, metal edging around the perimeter. The main thing that catches – a swivel mechanism that allows the display to make a hinge half somersault, ie rotated 180 degrees. What modes offers the manufacturer? There are six “tent”, “laptop”, “tablet”, “screen”, “Presentation” and “Ezel”. In the latter, you can move up closer to the display, which is useful, for example, to surf the web or similar tasks. In general, each work scenario is good in its own way. As for the loop, they are quite strong and tight, so the display is not swinging and disclosed only with the help of two hands. 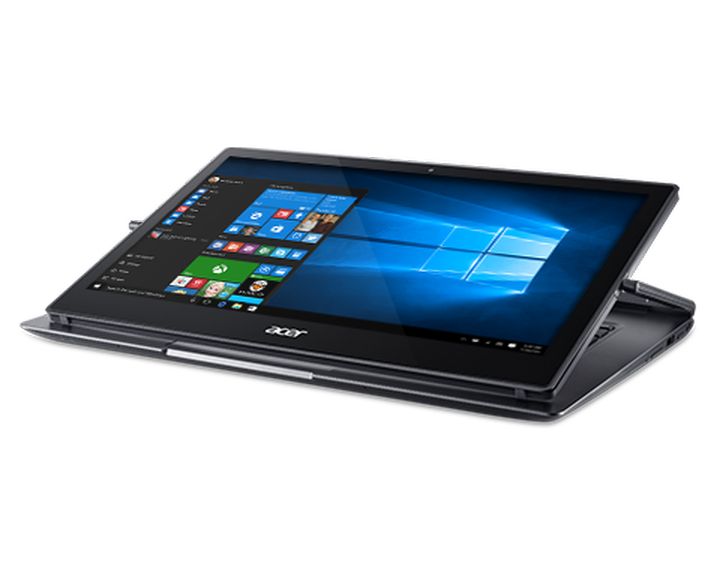 We can not say that the body of the 13-inch device made sufficiently compact. Its dimensions are 344x230x18 mm. By the way, due to the said joint Ezel Aero notebook looks much larger than it actually is. At the same time no problems with weight, and a half kilograms too unlikely to be felt even in the bag or in the hand. Rather, it may not like the easily soiled surface. At the slightest touch, her fingerprints and they are very noticeable.

Compiled laptop Acer Aspire R 13 very well. Details are fixed so that there is not a gap. And in terms of stiffness, no problem, except that slightly bend the right side of the palm rest area. The bottom of the device rather strict, perhaps due to the fact that it is whole. Feels used soft-touch plastic. To reach the internal components have to unleash a few screws. On the bottom panel is not only a foot for abutment and speaker grilles, and vents.

Acer Aspire R 13 is a 13.3-inch display that is visually perceived as a screen with a diagonal of 14-th. It has its own characteristics: high-resolution 2560h1440 pixels (WQHD) and protection of tempered glass Gorilla Glass 3, which is highly resistant to shocks, scratches. In addition, there is provided an oleophobic coating, which reduces the number of oily fingerprints on the display surface. 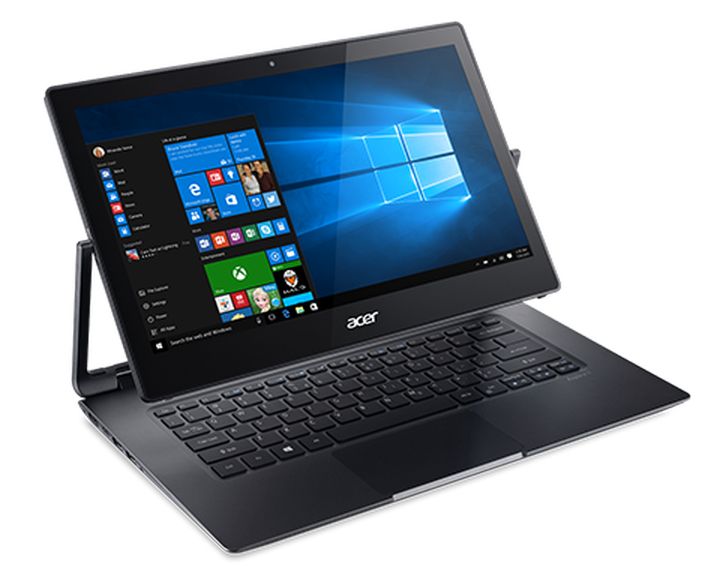 It is worth noting, and a sensor that responds to problems without command finger or stylus, by the way, the screen supports 10-point multi-touch. The display of Acer Aspire R 13 can be used for taking notes in tablet mode or when viewing the video. Brightness 340 cd / m2 enough even for operation in street lighting, and in the pixel density of 220 ppi – the picture looks pretty decent. By the way, usually IPS-display – it’s a great visibility, but here it is not perfect. For example, if a deviation from the right angle slightly changes colors. For the more budget proposed another configuration in which the installed display with Full HD-resolution of 1920×1080 pixels, which is also very good.

Acer Aspire R 13 has two stereo speakers. They do a good job with this task – the audio output. Of course, here you will not hear the bass though designed to support Dolby, but medium and low frequencies will be in abundance. For a laptop, this is to be expected, especially since you can always plug in your headphones.

As for the camera, it is the most common, with a resolution of 1.3 megapixels. Problems with the video calls will not, moreover, provided for bi-directional microphones significantly reduce interference during intercourse.

Count on a larger keyboard, unfortunately, is not necessary. The buttons are a bit smaller than the average size of 14×14 mm, get them comfortable, but not always possible to avoid mistypes. By the way, keys [CapsLock], [Shift] and dial the unit may seem small, but the course – short and not always clear, which also does not add comfort when typing. Another inconvenience: the neighborhood function buttons [F1] – [F12] with numbers. In total, it turns out that some of the keys assigned multiple tasks. By the way, [Delete] generally moved downwards. In general, a change in the layout has to get used to, although this is unlikely to take a long time.

Incidentally, the keypad is automatically highlighted, so you can comfortably work including darkness. Also, you can always turn it off. And again during printing you do not become annoying loud clatter, as buttons are pressed almost silently.

The touchpad transformer located in the usual place, under the keyboard. With the touch area, there is no problem: excellent responsiveness and sliding your finger across the surface. In addition, hidden beneath the surface of the mouse buttons respond well to touch, accompanying the action snaps.

By the way, many will certainly help stylus Active Pen, thoughtfully provided in the kit by the manufacturer. Now, being at a lecture or a conference, you can comfortably make different notes.

Acer Aspire R 13 R7-371T-52XE equipped with pre-installed Windows 8.1 and a modern filling. The first set in the case low-voltage dual-core processor of the fifth generation of Intel Core i5-5200U (Broadwell). The base frequency of 2.2 GHz chip, the cache in the third level has a volume of 3 MB. The CPU supports a number of important technologies, including Turbo Boost, which allows to increase the clock speed to 2.7 GHz. This will entail faster the processor to perform a variety of tasks.

Graphic calculations are made middle-class integrated graphics Intel HD Graphics 5500, which supports DirectX 12. GPU has 24 shader cores, is used to display a three displays simultaneously, and is able to decode the N.265. The performance of the graphics enough to perform simple tasks. However, it will be possible to play, but only simple toys, for example, Sims 4 or Dota 2 at medium settings and a resolution of 1366×768 pixels with a frequency of about 38 fps. 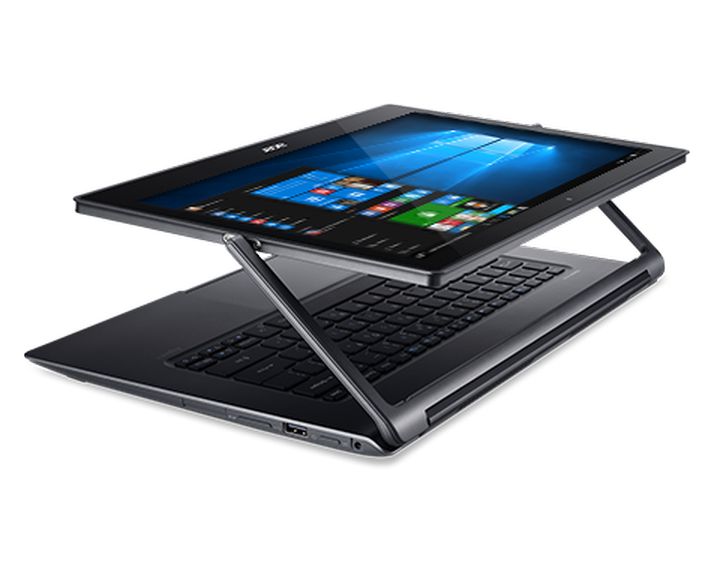 Also, the manufacturer provides 4 GB of DDR3-1600 MHz RAM, and instead of a hard disk in the configuration has a capacity of 256 GB SSD. In general, the selection of hardware is successful, many applications this is sufficient.

Interfaces busy side faces transformer. On the right, you can see the card reader SD, USB 2.0, slot for charging and the power button Acer Aspire R 13.

On the left side, there is a pair of USB 3.0, HDMI, and a slot for a Kensington lock and a combination audio jack. As can be seen, the device is not the RJ-45, and not even thought about the adapter. Of course, for the transformer and it is not always necessary, but it would not have been superfluous.

If you need to work away from the network, it is necessary to use a 4-cell lithium-ion battery capacity of 3220 mAh. By the way, suffice it to 8-9 hours of downtime. But when watching videos or surfing the web should not expect more than 4-5 hours. Overall, the trip unit will not fail if it is used wisely.

Despite the fact that this is not the transformers are innovation, they are still interesting. Acer Aspire R 13 – a typical example of such a device. Unlike its competitors, it can offer six different transformations, thanks to the joint Ezel Aero. In addition, the laptop good display having WQHD-resolution, protection Gorilla Glass 3, as well as modern filling and provided included the stylus. Perhaps because of the design of the body structure may seem more cumbersome than it should be in the 13-inch laptop, however, it is not the problem to take with you. Considering the functionality of a transformer and a price tag around $ 1150 is unlikely to have to think twice about buying.