Once we are already familiar with your laptop ASUS G751JT, now in front of us brought his successor – review laptop ASUS ROG G752. Despite the fact that between the outputs of these models is the very small gap of time, they have turned out completely different. Naturally, the internal content is different in the first place, because the chip to replace the 4th generation has come second. However, significant changes were made and the appearance, because the design of the successor completely redone.

Of course, the gaming notebooks – this is a very specific niche, which, however, is becoming increasingly popular. Avid gamers will not stop even immodest price of these devices, so manufacturers do not hesitate to set the obscenely high price tags on gaming gadgets. In fairness, most of the price is still justified, because in such “monsters” is a very powerful filling, capacity battery, and an elaborate ventilation system.

Without a doubt, the changes clearly benefited from the new product. Now in its lid, and no hint of plastic, it is entirely aluminum. Instead, of black engineers were founded upon the gray, red, and even insert replaced by orange. Let’s look at the design of a little more: So, on the surface of the cover, almost in its middle, you can see a small brand logo on the sides of it – the two vertical orange stripes that illuminate during operation. At the junction with the rear face – the plate is orange, which dilutes the great appearance. The opening angle is 120 degrees. 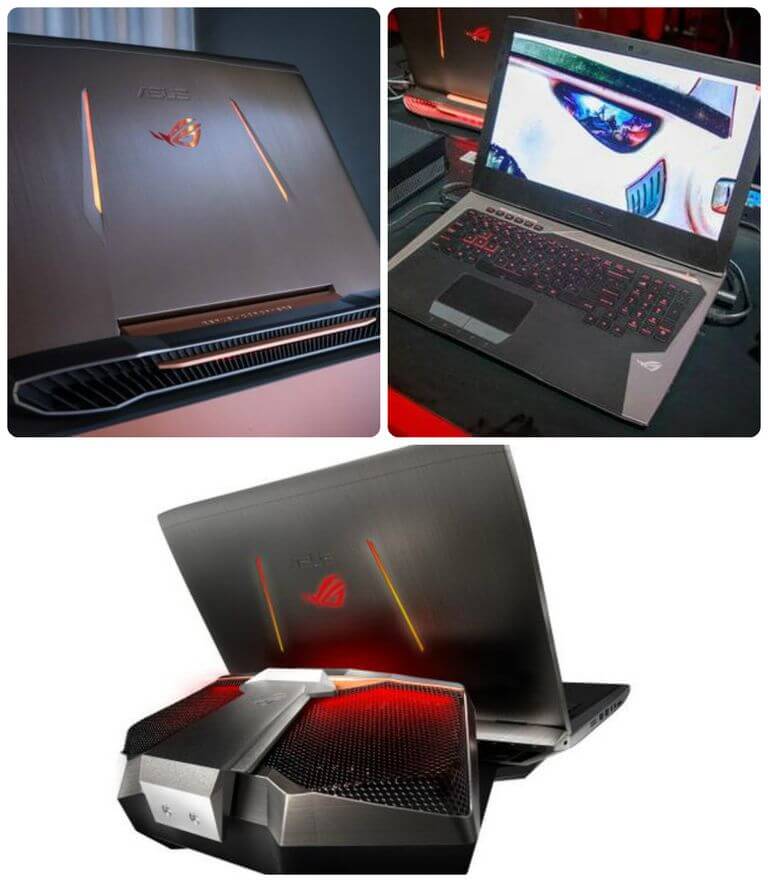 The plastic body of the review laptop ASUS ROG G752 is still used, particularly by opening the device, see soft-touch surface black. It is the best of Mark, although fingerprints are, but not so active as to cause complaints. Above the ergonomic keyboard is a row of physical buttons. They are placed on a metal insert, which surrounds the area around the perimeter. As for the screen, then around it has a pretty thick frame with a wide bottom. Traditionally, it decorates the upper area of the eye webcam.

As for upgrading, then the item is realized not as good as it would be desirable for many users. So, on the bottom, you can see two panels: from that smaller, just to get rid of by tilting the rubber plug and loosening the screw located underneath. Under this bay, you can see the hard drive and RAM. But with the large panels have to tinker, because to open it, you must first loosen the set screw. And even then update the hardware components (chip, graphics, battery) will be difficult, but the ROG series has always been known for its inaccessibility.

The body of the gadget turned out quite hard, and indeed, review laptop ASUS ROG G752 has a superb build quality. However, if you deliberately put pressure on the cover, it is likely to sag, but which users will do this?. And finally, a few words about the “weight class” laptop. When it comes to gaming niche, it makes no sense to talk about mobility and compactness. Gaming laptop usually looks massive and dimensional and yet it is much heavier than his brother, intended, for example, for office work. Thus, the size of review laptop ASUS ROG G752 as follows: 428h334h23-43 mm, weight – 4.06 kg. By the way, in the maximum configuration Weight device reaches 4.36 kg and the thickness of the case – 53 mm.

Variations resolution 17.3-inch display review laptop ASUS ROG G752 are two: first, that, by the way, and we have chosen for this review, it is proposed in the resolution of Full HD, the second – the privilege of top-end modification – 4K.

High resolution eliminates graininess, and in general, to play such a large screen is very comfortable. Brightness and contrast are at the proper level; their figures are 976: 1 and 350 cd / m2, respectively. Match sRGB – 84%, and a good result provides the IPS-matrix. In addition, it suggests the wide viewing angles, so the device can not only play but also to watch movies with friends or as a family, etc. For color reproduction, in general, no complaints, maybe some colors do not appear imperfect, but these errors are minimal. By the way, the display is matte, but still direct sunlight should be avoided because the picture quality may deteriorate.

Acoustics is very pleased with the laptop. Two stereo speakers ASUS SonicMaster give the great sound with a good balance and excellent frequency for both laptop bass. By the way, it is located on the bottom of the subwoofer, which is just responsible for the reproduction of low frequencies. By the way, at maximum volume, the sound is not distorted, and this is very pleasing. And yet, in order to better feel the game, so to speak, to plunge into the right atmosphere, we recommend using headphones.

The built-in HD-camera is designed primarily for video calling on Skype. To take photos, its characteristics are quite modest. However, if you really need to try it, of course, you can, but do not expect to detail is not necessary.

The keyboard in any gaming review laptop ASUS ROG G752- its most important component, because it is by its ergonomics and sophistication depends on how fast will the player’s movement. The review laptop ASUS ROG G752 keyboard is virtually identical to its predecessor used. It is made on island type, the keys are separated with “margin”, that is, around them enough space.

Arrows are slight below the keyboard unit, due to this they turned out not pressed down and not “constrained” by the main unit and Nam pada.

The buttons are rectangular and marked with red markings. They have soft and short stroke thereby RTT minimized. It is difficult not to notice an interesting form of space, through which it is easier to get by. The power button gadget also received a bizarre form: it is made in the form of a triangle and is located in the upper right corner surface.

Traditionally verge keys [W], [A], [S], [D] is further highlighted in red, so they can be quickly and easily found. Incidentally, in the present keyboard lights of the same color, so the favorite toy can be played even in the dark. Above the keyboard, left-hand corner is located six additional buttons (macro keys): one of them – Record Key – used to record gameplay. The rest can be assigned to run any applications using the utility ROG MacroKey.

The touchpad has turned out quite big and easy to use. However, for the gameplay is usually used a special mouse, so a user will resort manipulator except during web surfing. The touchpad supports a sufficient number of multi-touch gestures (scrolling, dragging, and zooming) and provides fast response, so work with it very nice.

Review laptop ASUS ROG G752 VT 90NB09X1-M01190 comes to the shops with Windows 10 64-bit. As the processor uses Intel Core i7-6700HQ generation Skylake. It works on the basis of four cores is 2.6-3.5 GHz operating frequencies, and supports multi-threading technology Hyper-Threading. CPU is built according to the norms of 14 nm process, has 6 MB cache in the third level, and its TDP is 45 watts. 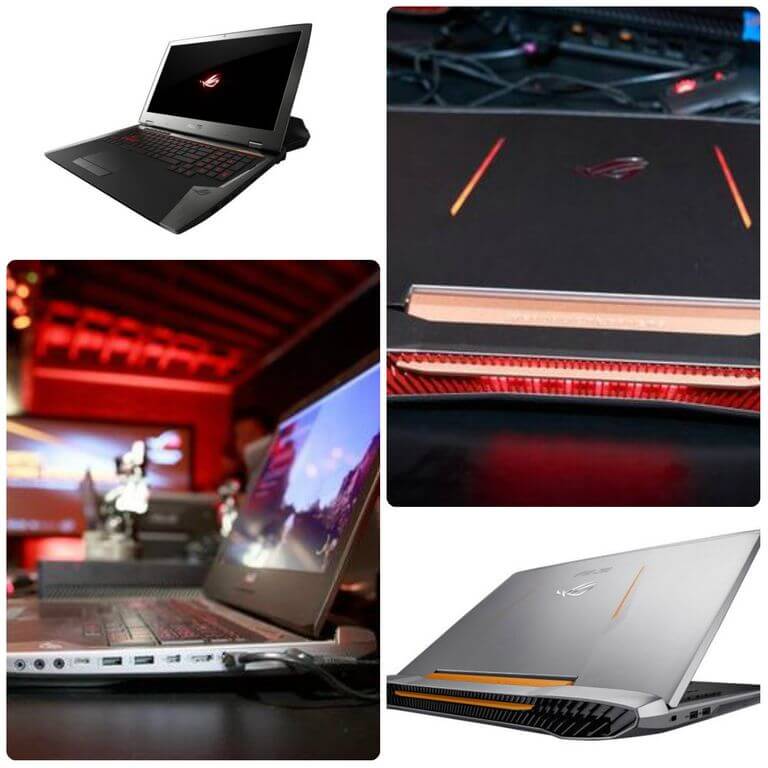 For everyday tasks in the laptop has built-in video card Intel HD Graphics 530. However, in complex problems, particularly in games, it gives way to a discrete graphics NVIDIA GeForce GTX 970M with 3 GB of internal memory standard GDDR5. This video card is made on the 28-nm process; it has a nominal frequency of 924 MHz, which can increase up to 1038 MHz, with the support of Turbo Boost.

As for gaming performance, the GPU shows the following results: Mad Max (2015) in their native resolution and ultra settings go with 75-77 fps, while the Battlefield Hardline (2015) with the same parameters can be played at a frequency of no more than 60 frames second, in FIFA 16 (2015) – at 165-170 fps. Thus, we can conclude that the notebook copes with games this year, no brakes and no lag even on the highest setting.

Interfaces in the review laptop ASUS ROG G752 are located as follows: on the left side, you can see the two-port USB 3.0, card reader SD, optical drive Blu-Ray and Kensington lock.

The front portion devoid is interfaced, as well as the rear. The latter has a powerful ventilation system. As for wireless communications, they are represented as Wi-Fi 802.11 a / b / g / n / ac and Bluetooth 4.0.

This review laptop ASUS ROG G752 has a 6-cell non-removable lithium-polymer battery capacity of 67 Wh. Unfortunately, the standalone performance left much to be desired: an ordinary web surfing plant a laptop for less than 2 hours, and the game gadget discharge in about 50 minutes. The results, of course, more than modest, however, the low duration is the battery characteristic of virtually all gaming laptops.

A few words about the heat: even during gaming battles housing trends remain comfortably cool, and it’s very good. Often, the “problem” in notebooks of this form factor – the left side of the keyboard, but, in this case, it does not overheat and does not interfere with a comfortable game.

So, without any embellishment of reality, we note that our familiarity with a brand new gaming laptop ASUS G752VT went very well. The appearance of a laptop designed in the typical style gaming: steel colored casing, as well as the predominance of an orange and a couple of aggressive red. Gadget gets a stylish and most importantly, stable. Its weight and dimensions of the traditional big, but this are normal for this form factor. 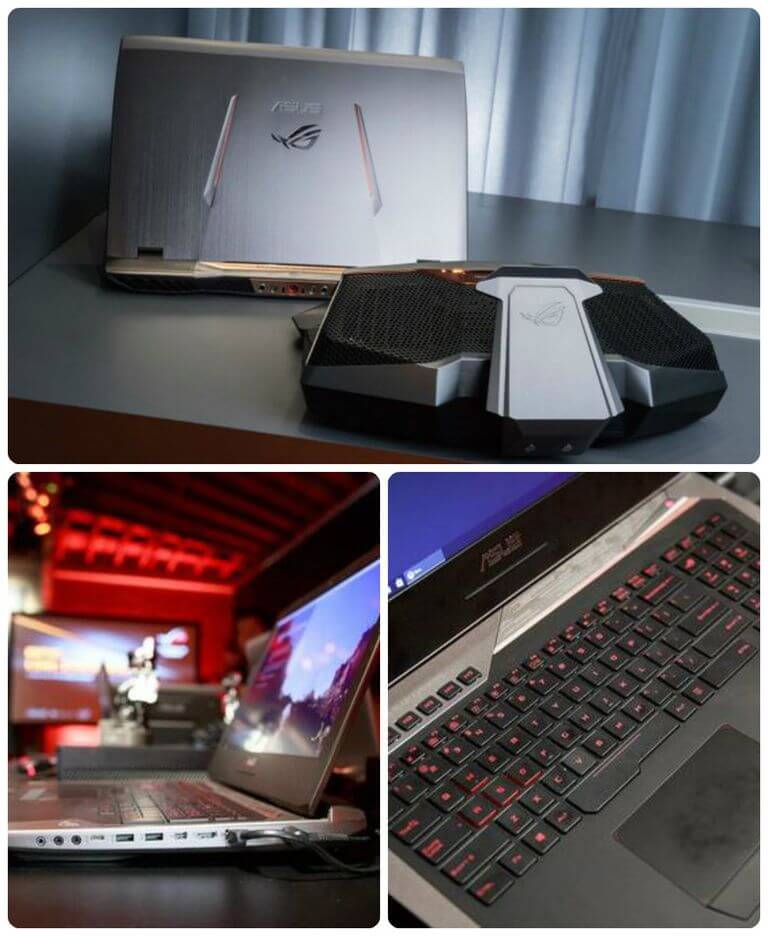 In review laptop, ASUS ROG G752 provided high-quality 17.3-inch IPS-screen with Full HD-resolution, good brightness, and contrast. Keyboard “sharpened” specifically for gaming needs, it is ergonomic and extremely comfortable. By filling and no complaints: it is based on the latest generation of chip and graphics card performance, so even modern games at high settings literally fly!

The only thing there is a question – this battery. The fact that we are dealing with a gaming review laptop ASUS ROG G752, which in most cases will be in the vicinity of the outlet limit, does not detract from the fact that the battery should be a little more succinct. By the way, we are considering is not top-end equipment, the latter has a more powerful graphics card and the battery. As for the price, given the focus of gaming laptop, it is quite humane – $ 2500 for the modification described.