Researchers from the University of California and their colleagues from Stony Brook University for the first time created a neural chip that consists entirely of memristor – electronic analogues of memory cells, modeled on the principle of human neurons and synapses. The idea of Professor Leon Chua memristor (Leon Chua) announced back in 1971, but it was first implemented a team of engineers Hewlett-Packard in 2008 alone.

Some scientists believe that human consciousness is actually the perfect system of storing and processing data in memory. Development of technologies for the use of memristor many researchers, but only now building a processor, based solely on these elements, it was possible.

Until now, a significant portion of the neural networks used, for example, Google, Facebook and IBM, have been working on the hardware platforms of traditional computers and was designed primarily to detect faces in the crowd, or the answer to a question the user specified in natural language. However, the requirements that apply to similar systems today, sometimes it is impossible to implement on most modern computers, because the complexity of the programmable growing avalanche problems. 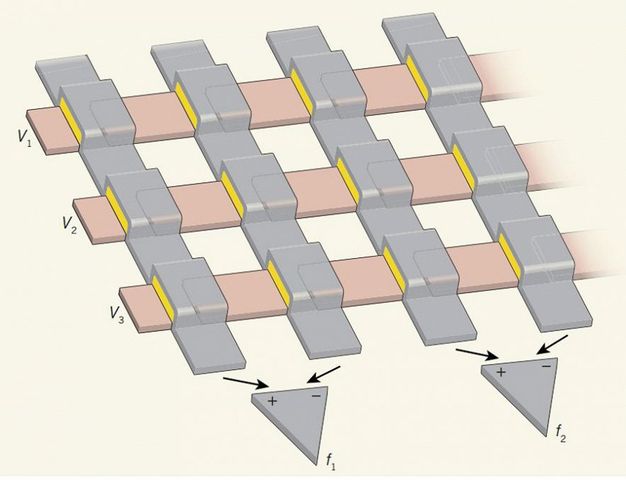 Researchers believe that the replacement of transistors memristor in the future make a breakthrough in neural networks, increasing their effectiveness a thousand times. Systems will have more opportunities to learn and become functionally much closer to the human brain. Furthermore, reduced costs to run the neural network.

The chip on the memristor was developed based on metal-oxide memristor crossbars and represents a basic neural network that is performing only one task – to recognize patterns of simple black and white 3×3 point. The experimental chip – the first step in the launch of large neural networks, which are only effective implementation of search tasks and can even become the basis of a computer model of the human brain.