The trend of the last two years have accessories that allow the user to obtain information about their health, regulate sleep and optimize exercise.

Jawbone The company has come a long and difficult path, before you get into the top producers of wearable electronics. The first bracelets had the highest percentage of defects (they just turn off all), second-generation devices had problems with battery (instead of the declared day of ten), and only an accessory called Jawbone UP24 became a bestseller, and even entrenched in the Apple Store. A significant role in the success of the company has played an exemplary loyalty to the users: Jawbone without problems changed defective gadgets with new ones.

Now that all the problems are behind us, to a full international release three models are ready to fight smart bracelets. The first device UP3, equipped with heart rate monitor and a set of sensors that the company compared with expensive medical equipment. The abundance of sensors allows the bracelet to capture the pulse at rest, to monitor sleep, to recognize the form of physical activity and well-selected for the user training program.

We should also talk about the case from the gadget Jawbone: unlike previous bracelets this company are used anodized aluminum. The guarantee of protection against water – dive up to 10 meters (ie, not just a shower, but also a swimming pool). The charge should be enough for a week, and as a companion device can serve as a smartphone Android and iOS (synchronization Bluetooth). In addition, representatives of the vendor’s promise that together with updates UP3 owners will get new features. What – is a mystery. The bracelet is not yet sold officially in Russia, but we can arrange for pre-order. 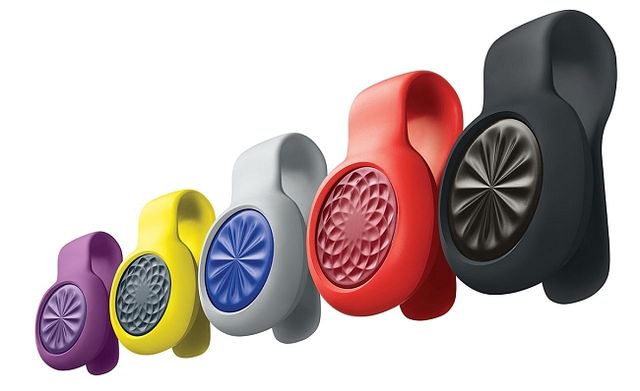 Real fitness trackers relatively young, and people are often afraid to pay large sums for the product, which can only count steps and burnt calories. For those users who still eyeing the niche trackers, Jawbone presented a simple and budget accessory called UP Move. It is a color clip (although there is complete and hand strap), which is easily attached to clothes and proceeds to the accounting statements. Functions are at least: in addition to the standard (steps / calories) present monitoring phases of sleep (but in “night” mode will have to translate gadget manually). Benefit from at least the last option: there is no strong vibration motor, so as a smart alarm clock UP Move will not be able to work.

In theory, almost all functions of the tracker pulls and smartphone on Android / iOS, but it’s disastrous effect on its battery. With UP Move battery-pill will be spent only on Bluetooth-connection. 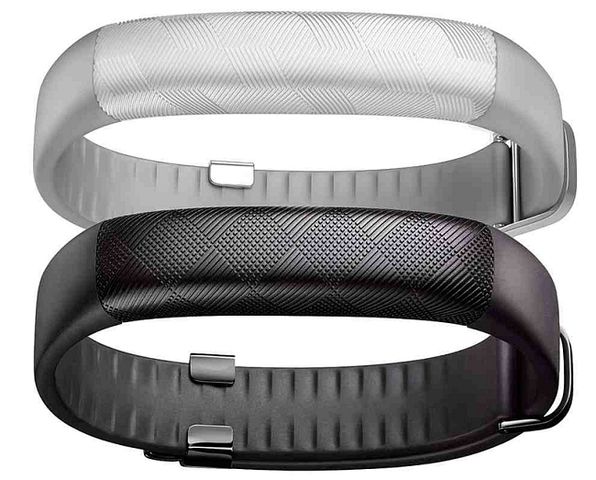 The version with the index “4» Jawbone presented just five months after the announcement UP3. The design and functionality of virtually nothing has changed: the same aluminum, the same ultra-sensitive heart rate monitor, the same analyst deep sleep. The only thing added, – NFC-chip bracelet allows you to use as a mobile wallet.

However, initially only maintained overseas banks (in particular, American Express), but it is assumed that the list of banks gradually increase. Second subjective minus UP4 – lack of notification: that the transfer is successfully performed, will be available only by a terminal installed in a store.In the US, a new tracker price was 199 dollars. 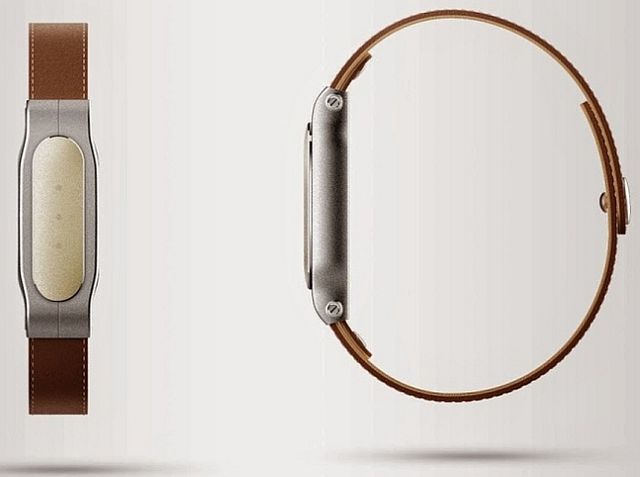 In 2014, the Chinese company as if mocking the largest manufacturers of fitness bracelets: Mi Band sold (and sold) for $ 13, but it is equipped with everything what should have a date tracker. The module is inserted into the silicone strap, the LEDs display the status of the battery, and flows into the smartphone (iOS / Android) information on physical activity (recognizing different kinds) and sleep quality (supported smart alarm clock). This module is protected under the standard IP67: it will withstand even short-term immersion in water.

However, many users took this device with suspicion: it is difficult to believe that for the money to buy something really high quality. Then Xiaomi found a really wise decision in April Asian company presented the premium version of Mi Band. The only difference – leather strap. Thanks to this item, and the new price ($ 40) bracelet initially looks expensive and solidly. Retailers are now taking pre-orders for this model. 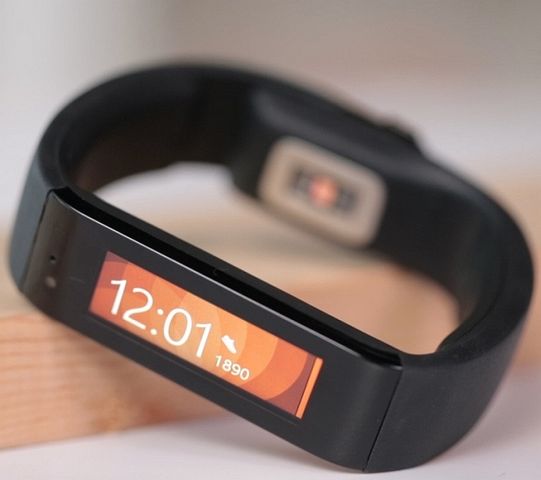 The Redmond for two years to analyze the market smart bracelets, choosing a suitable strategy: according to rumors, the corporation originally planned to develop the most simple and reliable tracker, but then changed its mind in favor of functionality. As a result, Microsoft has turned controversial Band – an accessory that can be called a symbiosis of smart watches and bracelets fitness. From the hours are a decent size screen (see the notification and time), as well as a speaker and a microphone – they need WP-smartphone owners to use the voice assistant Cortana.

On paper, the specifications look simply fantastic Band: Bracelet 24 hours following the pulse, leads running and walking statistics, analyzes the route using the built-in GPS, counts steps, monitors sleep, forms (and loads of applications) training programs, helping to put the right goals and even controls the level of ultraviolet radiation. Luxury functionality does not actually affect the price: overseas Band retails for $ 200, but even there the tracker is in a permanent state of deficit.

At the same time, Western journalists to test the new product, is not enthusiastic about the device. The first disadvantage – autonomy: Band have recharged every 2-3 days instead of once a week, as the rest of the trackers. The second disadvantage – design: one witty western author gadget even compared with a bracelet worn by those who sit under house arrest. Third shortcomings – Protected housing (can not even wear in the shower), and the fourth reason to think twice before buying – ergonomics: due to the vertical shape of the display the user is forced to curve unnaturally hand to read the information. In short, Microsoft Band – a promising but controversial Bracelet: before buying better make sure that you need all of its functions and you are ready to put up with the above disadvantages. 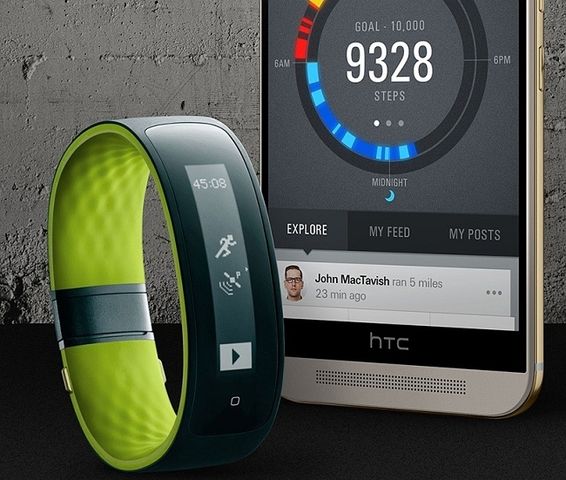 For most people who are interested in technology, MWC 2015 is associated with a high-profile premieres Galaxy S6 (S6 Edge) and impersonal upgrade the flagship HTC: M9 model is little different from last year’s M8. In fact, the presence of the Taiwanese vendor in Barcelona was not limited to the announcement of the smartphone – with the company Under Armour HTC has developed a waterproof tracker with curved P-OLED-screen TV. In addition to a gentleman’s set of functions (steps, distance, total activity, sleep, music, weather) bracelet equipped with its own GPS-module, which allows you to keep track of training routes.

The second reason to pay attention to this device – an interactive network, organized specifically for HTC owners bracelet. There Grip holders will be able to view the history of their achievements, receive valuable tips on personal training and compete with your friends (now the number of friends is limited – a maximum of 20 people). «HTC Grip will work with you as if you are constantly under the supervision of several professional trainers,” – promise to the company responsible for the promotion of this product. The only serious drawback Grip – ovolno high price: few users willing to shell out $ 200 for a gadget is not the essentials. It is also necessary to consider the competition: Jawbone counterparts from other well-known companies are much smaller. 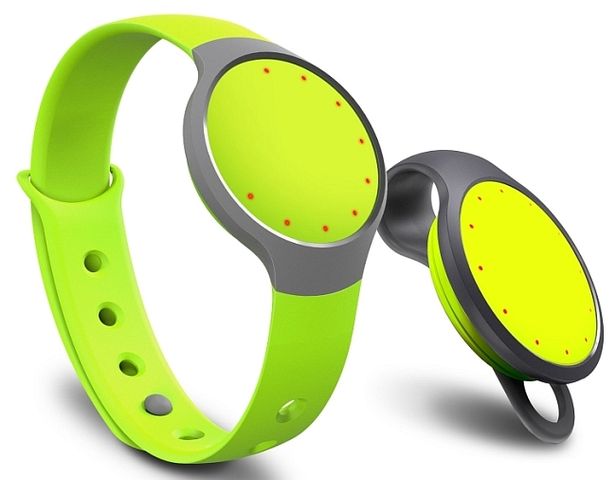 After the success of the model Shine (accurate aluminum washer with LEDs arranged in a circle) in the Misfit knew how to capture the market cost trackers: to present the same Shine, but not in a metal version. The result of the company was a device made of polycarbonate, called Flash, which in the West is only 49 dollars.

Firstly, Flash is equipped with a truly waterproof enclosure (you can swim and dive). Secondly, his time – 6 months on a single battery (no reel stands once a week). Third, the absence of the screen does not mean low informativeness: LEDs allow us to determine the time (within 5 minutes) and the number of passed steps (of the daily value). Fourthly, Flash stores information about the quality of sleep. Fifth, it provides just 7 colors – from white to neutral nuclear acid.

It is impossible not to take into account the versatility of this tracker: smart polycarbonate washer can be inserted into the clip-clip, bracelet or necklace. The accuracy of the measurements will be the same for all the high level.