Mock-ups, spy shots, constant insides and opinions of authoritative experts circulate in the network for over a year, and iPad Pro not even approach: the March presentation of the new MacBook tablet was not, therefore, it will at best in October. At the same characteristics Pro (second name – Maxi, third – Plus) have been known for a long time. Almost no one doubts that the device will get 12.3 (12.9) inch screen with a resolution slightly higher than the iPad Air, the modified processor Apple A9, 2 gigabytes of RAM and improved battery (up to 12 hours of video to 10 – a conventional iPad) with rapid charging function.

However, some important questions still remain open. The first of these – the stylus. Steve Jobs hated this accessory with all my heart and did not doubt that our ten fingers and have the perfect stylus. But now that Apple is dead demiurge, the company may well go for the experiment.Moreover, the previous commandments Jobs has violated. In particular, his argument that “the big smartphones no one will buy” repeatedly refuted PHABLET iPhone 6 Plus (here the way to remember what to do mini-iPad he also initially did not want to). Of course, Apple’s pen will be different from ordinary stylus for capacitive displays: it is assumed that this device will become an indispensable accessory for designers and artists. Details, alas, no, but the conclusion can be drawn as follows: Talk about the stylus should not be considered groundless.

The second controversial point – the operating system. Apple refuses years in MW iPad: sometimes it’s annoying limitation of even the most loyal fans of the company. Devices from other vendors (eg, Samsung and LG) are able to accommodate multiple windows on a single desktop screen, and iPad – no, but at the end of 2015, this situation may be broken. Western and Asian experts are divided into two camps. First convinced that iPad Pro equip standard iOS 9 MW of exclusive. Adherents of other camp have no doubt that Apple is developing a hybrid OS that will combine capabilities of iOS and OS X. Then we can safely wait for the stream of original accessories – from the compact keyboard to mice that will synchronize exclusively with iPad Pro.

The third dilemma – the type of display. Force Touch technology used in Apple Watch touchpad and a twelve-inch MacBook, but no one knows exactly how hard it is to introduce it to the big screen iPad. Determination of force will touch tablet huge number of advantages: it becomes a universal tool for recording music and top-end gaming console.

At WWDC Apple announces only the software, and in September in San Francisco is traditionally show iPhones. As already clarified above, the probable time of the release of iPad Pro – October 2015. The price of 12.3-inch can only guess. Likely range – from 800 to 1000 dollars for a younger version without additional accessories.

In the autumn of websites IT-flying rumor that Apple plans to roll line 7.9-inch tablet. The arguments seemed quite convincing. Firstly, September 9 Tim Cook announced iPhone 6 Plus – 5,5-inch PHABLET capable of adequately replace “the pill.” Secondly, reduced low-margin iPads: Apple sells a lot of copies, but gets a little money. 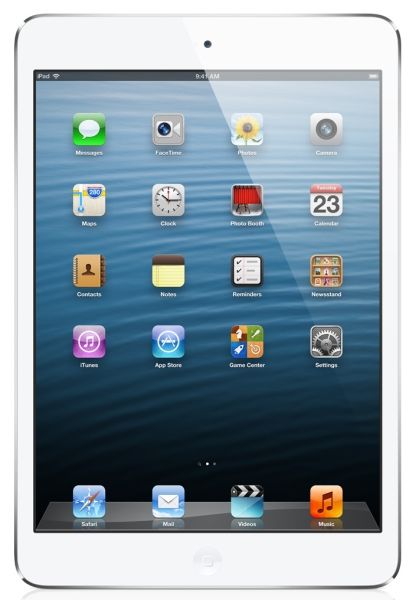 In general, tablets seemed unenviable fate: judging by how easy it is to Cupertino away with the ruler cult iPod (the last announcement – in 2012, after it – two lazy update one version of the iPod Touch), Cook can easily get rid of the iPad mini. The October release confirmed all the fears instead of the updated mini third-generation viewers in California looked at the iPad mini 2 sensor TouchID and modification with gold case. The chipset and amount of RAM is not changed, the thickness of the body – too, and all this leads to sad thoughts.

However, in early March edition AppleInsider has published the news about the fact that the fourth-generation iPad mini with Apple A8 processor will still be presented. However, the format of the announcement was not specified: it is very likely that we are waiting for “silent” update device.This means that in May (or June) at the company’s website will have a new gadget with the new price (plus $ 100), which will be on the shelves immediately. Under unfavorable scenario, wait until the next “mini” have as much until October. Then, this month will be a presentation once the three plates (3 main Air, Pro and mini 4).

The official announcement of the Japanese tablet held within the MWC 2015 in Barcelona. With the price of everything, too easy: the device is sold in Europe for 559 euros (minimum configuration). 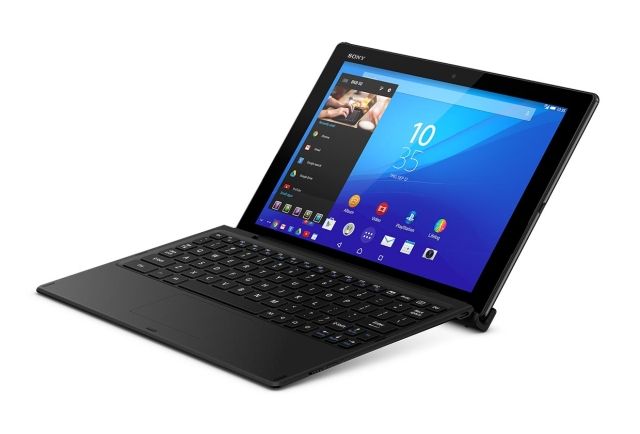 10.1-inch (screen resolution – QHD) tablet weighs only 389 grams with a thickness of 6.1 mm: Dimensions for Sony has always been one of the first places in the list of priorities. Another useful superpowers Z4 Tablet – waterproof. Due to the plate IP68 protocol can walk into the bathroom and immersed to a depth of up to six meters (it is not recommended to keep under water for longer than 30 minutes at a time). Inside Z4 Tablet is fully consistent with the status of a flagship gadget. Performance provides a 64-bit chip Qualcomm Snapdragon 810, and for the speed of the interface are responsible 3GB of RAM. Although the water resistance, the internal memory can be expanded at the expense of cards MicroSD. The image of the perfect Android-tablet completes the battery: about 17 hours of continuous viewing video does not even dream of the owners of iPad. By the way, Sony focuses on comfort when watching movies and clips: sound quality is provided by two stereo speakers.

One of the main problems of Android-gadget accessories is considered to be a deficit (in comparison with the products of Apple, of course). For Xperia Z4 Tablet Sony presented a slim carrying case with a keyboard and a clever column, which actually transform the gadget into a means for presentations. It will not go away, and synchronization with the PlayStation 4, which was announced in September 2014. The algorithm seems very clear: how to connect the tablet to a console on a home network, we take into the hands of corporate controller and start the game.

In December last year, the media expounded a blatantly news about Sony’s plans for the production of a competitor for the iPad Pro. According to preliminary data, the Japanese are going to present the 12.9-inch device with a luxurious Quad HD (3840h2160 points ratio – 16:10) screen, a thin (8.6 mm) metal housing, a processor Qualcomm Snapdragon 810, 4 GB of RAM and vosmimegapikselnaya main camera. It is likely, for the usual accessories Z4 Tablet will be presented for the Pro-version: in particular, the keyboard would have made Android-Gadget virtually full ultrabook.About the price of the device only reads about: according to the December data, it will be $ 1,000 for the minimum configuration. At the current rate is 56-57 thousand rubles.

9-inch “tablet”, released in the fall in tandem with Google, failed when commentators criticized for HTC creaky body, pale screen and overpriced. The only positive point in the Nexus 9 authors unanimously recognized tests loud speaker, but to the overall success of this was negligible. 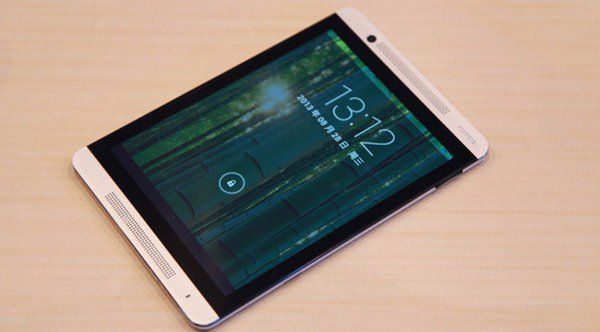 In 2015 the Taiwanese brand is ripe for the second (and in fact – the third in the history of) trying to make and sell the popular tablet. T1H will be based on all the same Nexus 9, however, the new device has a high potential. Firstly, there will be a proprietary interface HTC Sense 7. Secondly, the role of the processor will perform an eight-chip Allwinner H8 (all cores can run at the same time). This means that the “pill” will be considerably cheaper than the “nexus.”

In addition to the new chipset and standard shell, you can wait for the body style HTC One (M7, M8, M9). Most of the technical characteristics of the tablet remain at Google: 8,9-inch screen with a resolution of 2048×1536 pixels, 2 GB of RAM, 8-megapixel camera, 6700 mAh battery and to support LTE (the more expensive version). The price and release date is anyone’s guess, but we can not consider that HTC devices by way of presentations to the shelves usually takes very little time.

After playing with the top plates for $ 2000, Microsoft deigned to come down in the middle segment. $ 500 – that is how much will it cost 3 Surface in May (this month appointed the start of sales). 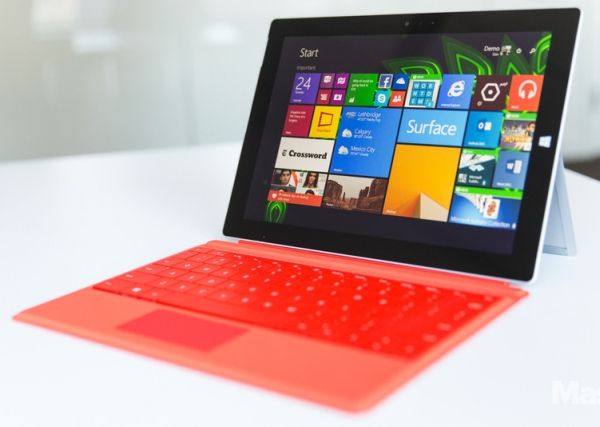 The first reason that on Surface 3 should pay attention – a full Windows 8.1, rather than the stripped-down Windows RT. The second argument “for” – very stylish magnesium alloy casing with a convenient stand. And the third paragraph – you have all the essential connectors, which, for example, sometimes not enough to the iPad. In short, Microsoft finally got a tablet with a view to: due to the price system and connectors Surface 3 can win market share from Apple.

However, other characteristics have gadget Microsoft pretty boring. Chip Intel, only 2 GB of RAM, a weak screen (ppi – 214), the lack of clear terms of release LTE-version – nemaloveroyatno that this device will be enough to triumph.

Chinese magicians able to do the flagship gadget for 300-350 dollars, trimmed in benchmarks and spy shots the new tablet. Mi Pad will be supplied 7.9 2-inch-screen 3.2 GB of RAM, Android 5.0 and shell MIUI 6. However, the main feature “tablet” may become supernova processor NVIDIA Tegra X1, announced in CES 2015 to January. 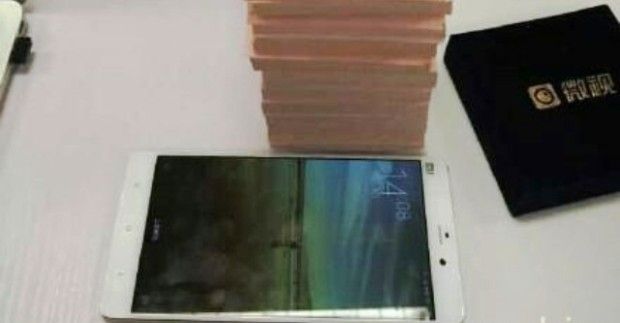 Mi Pad 2 to be presented in the coming weeks but rumors about the exact cost of the device yet.

Korean vendor so long lived with the idea to release a gadget iris scanner, which started production at the same time when the technology was made available, prepared by SRI International. C using a system developed by the sensor can identify the user in 1,000 times more accurate than a fingerprint sensor. 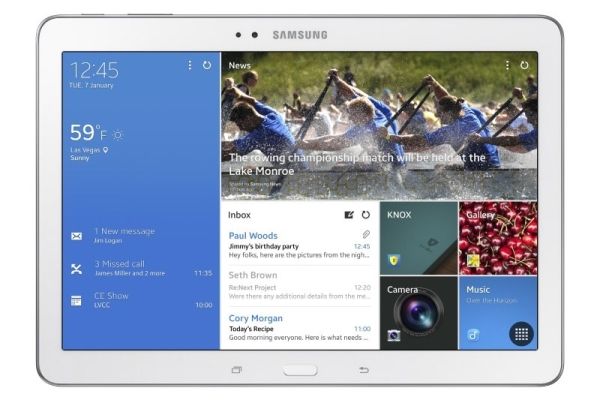 Curiously, all other items “pill” quite ordinary. The screen from the “is not the same as that of iPad mini», an old 800 Snapdragon processor, 2 GB of RAM, 8-megapixel camera, a flash unit 32 GB and design with the brand name “plastic under the skin” – there is nothing outstanding, and flagship can only be called 2K-resolution display.

Samsung Galaxy Pro 8.4 will be presented April 17 at the show in Las Vegas. No data on price and plans for the global release in the network yet.