Unlike the flagship devices HTC One (M9) – which has already appeared on the web all the information, including price – and Samsung GALAXY S6, the flagship news Sony or well-kept secret, or simply do not appear in the MWC 2015. In any case, Information about the smartphone Xperia Z4 while limited internal correspondence bosses Japanese manufacturer and a couple of screenshots of the new shell. But here’s the Xperia Z4 Tablet can please us very soon.

If you believe the leak, Xperia Z4 Tablet lit up in the official channel Sony Xperia Lounge. Although it was, it seems, a test run, a few users have noticed the appearance of new items on the site and made the appropriate screenshots.

Details is not that much – it was a “stunning 2K-display” and “the latest superfast processor.” And if the screen resolution is likely to be 2560h1440 pixels (while maintaining the aspect ratio 16: 9), the processor is not called. Based on the number of other flagship devices Sony, we can assume that there will be a set Qalcomm Snapdragon 810, which has already promised for more than 60 flagship devices from different companies. In addition, the work referred to the battery, which would please the efficiency of their work, as well as light weight gadget, although exact figures are not named. 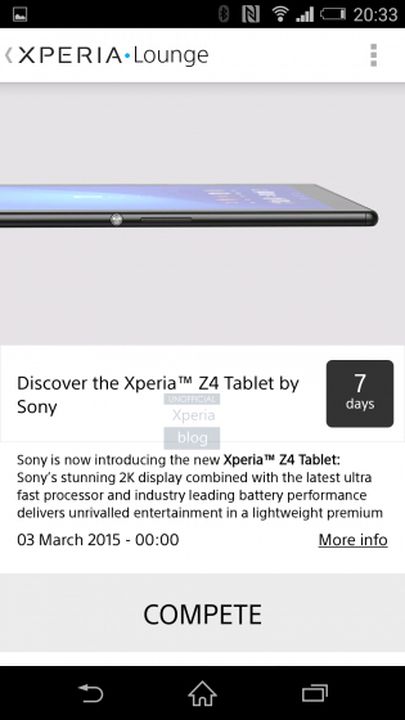 Screenshot tells us about the continuity of the design lines, slim profile news and good viewing angles, but it should be checked already live. We can assume that the novelty will come running Android 5.0 Lollipop, proprietary software and gain elements Material Design. In particular, it confirms the leaked screenshots that, as a source confirms to have been made on the Xperia Z4 Dual.

Recall previously discussed that the new tablet from the Japanese manufacturer will receive a 10.1-inch display. Sony also tests the display with a resolution of 4K, but it is unlikely to obtain such permission tablet this year. The appearance of the tablet will use a design Sony Xperia Z3 Tablet Compact with much thinner frames than previous “full-size” plates companies. From Z3 Tablet Compact novelty also inherit the stereo speakers. In Xperia Z4 Tablet is expected to 4 GB and 32 GB of internal memory. The main camera with 13-megapixel sensor, or higher, and the front camera is an 8 megapixel.