In recent years, the main trends of the producers of monitors – “ultra-wide format” and “super high resolution”, but still they existed separately from each other, not “meeting” in one product. So far LG has not released the monitor news LG 34UM95-P with impressive features – a diagonal of 34″, the aspect ratio of 21: 9, resolution 3440h1440 pixels.

The monitor news LG 34UM95-P is in the familiar fresh design frameless Cinema Screen Design, presented in the line 2014 (previously we have seen in LG 24MP76). However, in this model (probably due to very large sizes) hidden frame around the picture is the same as in the models of previous years – 1 cm.

It is also used “air” stand, where instead of the traditional “legs” – a thin plate made of transparent plastic, which is why it seems as if the screen “hovering” in the air. Silver Stand is made of metal and is wide enough to display her stood stable while trying to undermine it from side to side. Because only available adjustment angle change screen – no rotation on its axis or the height adjustment, the more audio portrait mode transfers this model. 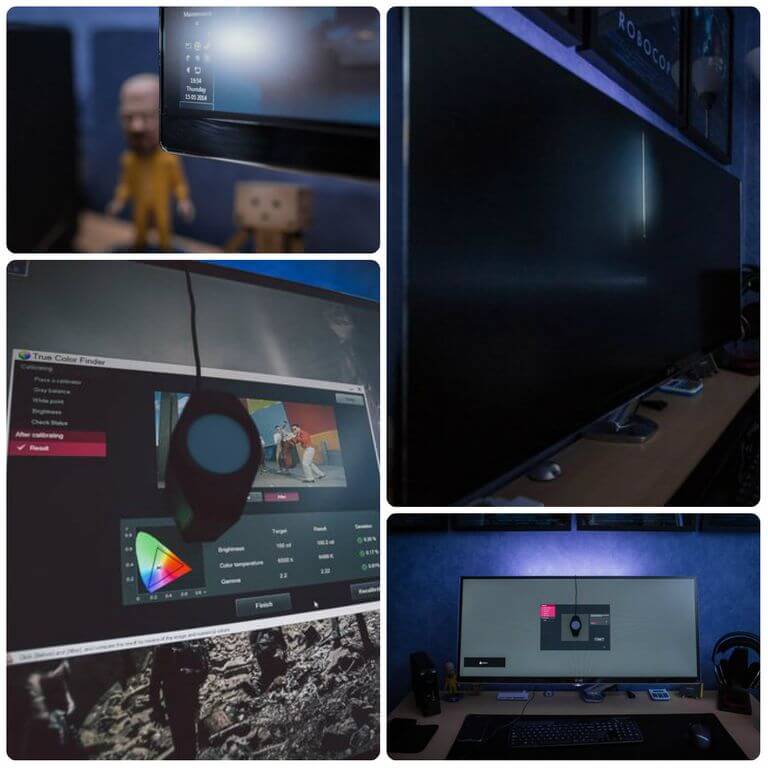 The screen is attached to the leg with two screws, and there are two sets of holes that allows the user to choose how high will be the screen (although the difference is small, about 1 cm). Fixing hard, but the screen shake “back and forth” is fairly easy – he’s a little unsteady, even when using the on-screen menu. The upper part of the leg with the “ugly” holes for mounting can be closed by a decorative panel color rear of the monitor, which in addition has a special holder for the cable, which allows to take them aside and not to spoil the view of the transparent panel.

The side faces of the monitor news LG 34UM95-P – shiny metal, they are framed by a thin screen shiny line. The bottom screen is supported by a glossy black panel located in the center of the logo of the manufacturer – no more symbols (like to use the technology or matrix type) on the monitor there.

The rear panel of the monitor news LG 34UM95-P is gray matte plastic resembling aluminum coating. It has a VESA-compliant mount for mounting the monitor on the wall, but traditionally for Monitor LG, all the connectors are oriented in the horizontal plane, so that the connected cables will either have to make a niche in the wall, or have the monitor at a distance from the wall. Because the connectors are presented here: two-port HDMI 1.4 (one of which is oriented towards), headphone output, DisplayPort 1.2, Thunderbolt port and two USB-hub with a USB 3.0 port and two – USB 2.0.

No control keys menu or the power button in the traditional sense in the monitor news LG 34UM95-P not – instead uses the four-way joystick, located on the lower edge of the center, in a slight thickening under the logo of LG (which simultaneously acts as an indicator of activity and illuminated with white light). “Click” or joystick deviation forward / backward is the quick menu, deviation to the left / right – the volume control menu built-in speakers.

Quick menu – is the drive of the four sectors in which the upper section is the menu switch between reading right – turns on the Picture-by-Picture, bottom turns off the monitor, and the left is actually the main menu. Last done in a style reminiscent of the menu of Windows 8 – it occupies the entire right quarter of the screen and looks very much like the leaves on the right side of the menu system.

The first item on the main menu is “Quick Access”, which contains the most popular adjustment – brightness, contrast, volume, video input switching and changing the proportions of the image. Next comes the item “Function”, which can be customized eco-mode, use the hardware calibration and switch the picture mode (Custom, Photos, Movies, and Games). Section PBP contains the settings mode “picture next to the picture» (Picture-by-Picture), where the user can display two images simultaneously from two different video inputs.

In the “Display” is two points – “Picture” (here is adjusted sharpness, black level for HDMI connection and switches the response time) and “color.” In the last paragraph, and provides basic image adjustments – Gamma (available 3 abstract values “range 0”, “Gamma 1” and “gamma 2”) and color temperature (warm, medium, cold and custom), and when you select a custom option available Adjustment not only the three primary colors, and further – to change the hue and saturation of the six colors. In the “Settings” menu are system settings – language selection menu, the glow of the power indicator, the activation of the standby switch setting DisplayPort 1.2 and the lock menu? And the last item on the menu is reset all settings to factory defaults.

As mentioned in the beginning, the monitor news LG 34UM95-P used 34-inch IPS-panel with “cinematic” aspect ratio of 21: 9 and the native resolution of 3440h1440 pixels. The size of the point, in this case, is 0.231 mm – almost the same (0.233 mm) was observed in 27-inch monitor with an aspect ratio of 16: 9 and a native resolution of 2560h1440 points. Thus, the pixel density is still lower than 4K-monitors with “classic” aspect ratio of 16: 9 and a resolution 3840h2160 – in particular, this means that the application interfaces are not adapted to displays with high pixel density, there appear normal. 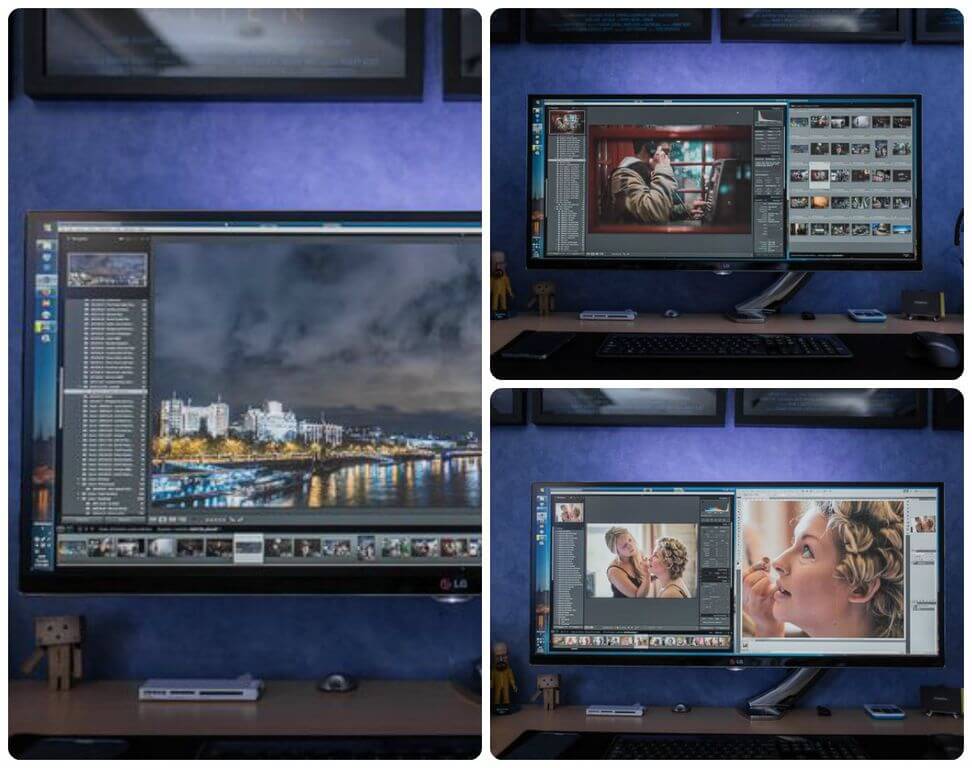 At this size, this monitor is ideal for fans to watch movies on your PC – modern blockbusters there are no black bars bottom / top, taking all the useful area, so that the physical size of the picture on the LG 34UM95 quite comparable to the one that sees the audience on a regular TV with an aspect ratio of 16: 9 and a diagonal of 37″.

However, the same, if not greater interest is the possibility of its comfortable use as a replacement for a two-monitor system. For similar tasks at one time was offered the option of 29-inch monitors with the same aspect ratio and a resolution of 2560h1080, but in their case, and the physical dimensions of the two “halves” of the frame, and their resolution imposes certain restrictions on the scope of application – for example, if a text editor or a browser window with a resolution of 1280h1080 points and 18-inch sizes  monitor is well suited, for the graphic editor – not very. Here the user gets much more comfortable 1720h1440 points for each “half screen” and the physical size of the ~ 21-inch monitor.

Claimed response is typical for modern IPS-panel, 5 ms (GtG). The monitor uses an overdrive – the user can select the settings in the degree of “acceleration” or completely disable it. Note that overdrive is “gentle” – even at maximum acceleration parameters, artifacts do not appear at the same time lubricate moving objects though reduced, but did not disappear altogether.

The monitor uses semi-matte screen cover so that the effect of the crystal (grain-tone areas of the image) is not able to notice; wherein unwanted reflections in the environment, it is also virtually absent.

Viewing angles is typical for modern IPS-panel. With a deviation in the direction of the brightness is reduced quite significantly, some noticeable distortion of color (except for the slight warming pictures) could not be detected, even at extreme viewing angles.

Leak backlight for a diagonal and the aspect ratio, is quite mild – only in a dark room, display the black background and the brightness to maximum unscrewing, one can distinguish slight glare in the corners of the screen and a little more noticeable bright spot in the top right corner. 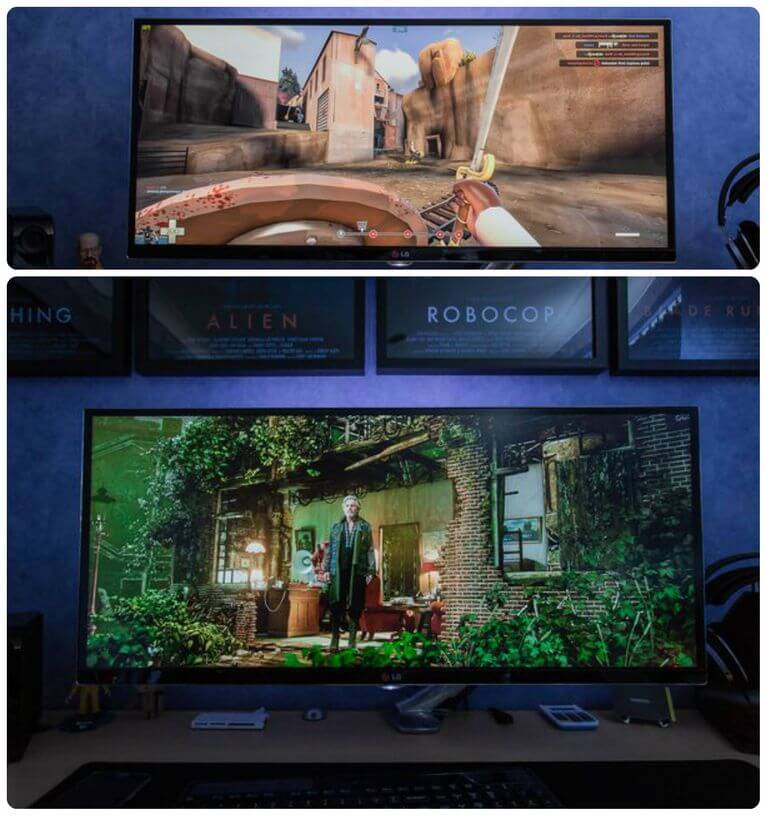 Glow-effect is also typical for this type of matrix – when viewed from above at an angle to the dark areas of the image appears barely noticeable purple or brown tinge (depending on which side the user looks).

In this model, to adjust the brightness not uses the PWM, respectively, flickering illumination from the monitor news LG 34UM95-P missing – so that users with sensitive eyes will be able to work for this monitor without fear of eye fatigue.

The minimum brightness of this model is very high – about 160 cd / m². With such a comfortable brightness to work for this monitor is possible only when there is ambient light. As a last resort, you can still reduce the contrast and – if this parameter is set to zero brightness drops to a much more pleasant value of 40 cd / m² and contrast but at the same time reduced several times.

In the “Photo” enhanced sharpness, the gamma value is a little too low (up to ~ 2.1), giving some picture, but all is working well halftones. Color temperature as significantly undervalued – to 5800K, it makes the picture a little warmer. The colour coverage was 98.1% sRGB and 72.5% – Adobe RGB.

In the “Cinema” reduced sharpness, gamma rises to normal, the temperature graph is almost perfectly linear and is located in the 5800-5900K, that movie mode is just the best option. 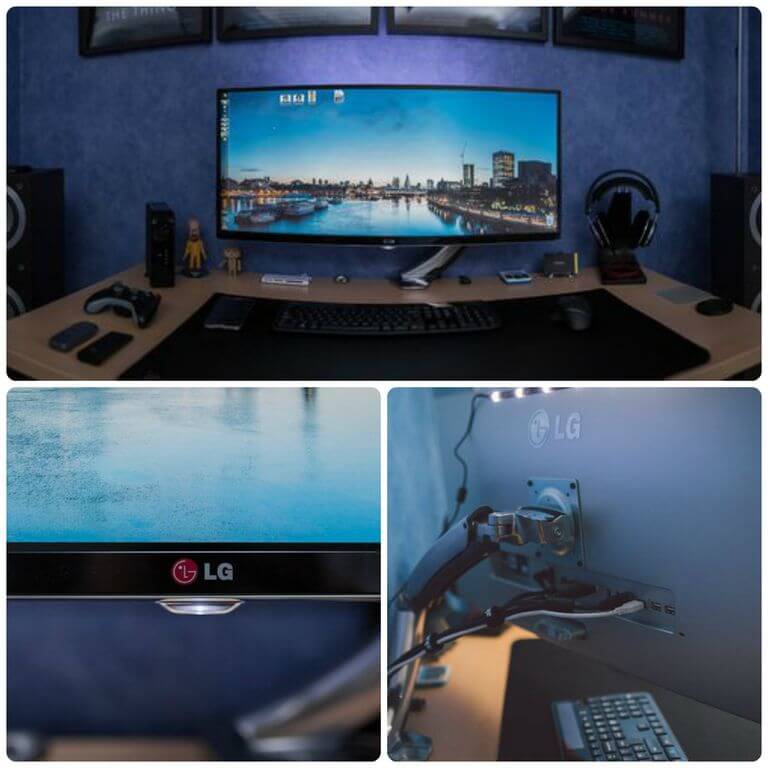 In gaming mode, the higher the clarity and set the maximum overdrive. In addition, it significantly raised the color temperature (~ 8000K), which creates a very cold, gave the blue image, and the value is somewhat reduced scale.

After calibration, the basic parameters of the images become conform to standard values, and color accuracy, the already high enough, became even higher. Colour coverage was 98.8% sRGB and 73.9% – Adobe RGB.

The monitor news LG 34UM95-P a very good impression at the expense of effective design, high image quality and, of course, a huge screen – with a diagonal 34 inches and a resolution 3440h1440 pixels (which the manufacturer calls UltraWide QHD) was already without any reservations can be used as a replacement for the two-monitor system.

Cons of the monitor news LG 34UM95-P: Because of adjustments available only screen angle.

The conclusion of the monitor news LG 34UM95-P: When the screen size of this monitor can be used not only for working with multiple windows applications at once but for watching movies.