The popularity of drones has been growing steadily, and every day expanding the range of their applications. Some companies (eg, Amazon) want to use drones to deliver orders. However, this delivery method is only suitable for short distances, because drones can stay aloft for about half an hour. Nevertheless, the company Horizon Unmanned Systems had an idea, and they are already working on its implementation. Their Hycopter aircraft can fly from 2.5 to 4 hours, depending on the load. All this was made possible through the use of fuel instead of lithium batteries

Lithium-ion batteries are used in drones to facilitate the weight, but they have obvious flaws, the main one of which is the short battery life. The usual drone can fly for 25-30 minutes, and with the additional load this time is reduced almost twice.

In turn Hycopter uses hydrogen gas in an amount of 120 grams. It passes through the lithium-polymer fuel cell generates electricity and which provides a drone to 4 hours. The energy resulting from such operations is equivalent to 3-pound lithium battery, which is more than half the weight of Hycopter. 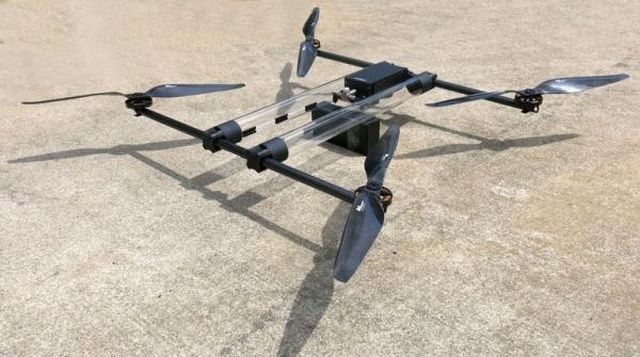 The drone is still at the early stages of development, and in its design a lot can change. For example, this model uses acrylic Conduit gas, but in this prior art is to use carbon fiber of 5 mm thickness. At the moment, the drone weighs 5 kilograms and can carry loads of up to 1 kg. With such a load of flight time reduced to 2.5 hours, and in the future, designers will be looking for ways to boost this figure.
Although the new prototype has not yet made a single test flight, Horizon Unmanned Systems are already taking pre-orders. Price has not been announced, but the idea drones might interest many.