Fitbit Surge device comes with a very loud slogan – “Train smarter. To achieve better results.” And by good technical execution, this phrase is fully consistent with the contents of the bracelet. Developers in the correct proportions were mixed attractive appearance and advanced “iron” to achieve results, which are waiting for many athletes using the fitness trackers. In general, the device has turned out interesting and useful, but that for many the most important thing, it will not have to locate near a power outlet, holding constant recharging.

What has Fitbit Surge claims can not be sure, because it is for the appearance, which is perfectly balanced, compared with many other similar devices. The strap used already become traditional medical silicone, wherein a set of properties that are useful for any athlete. With this material, the fitness tracker does not stick to the skin, it does not cause discomfort in the wrist during running and another exercise. 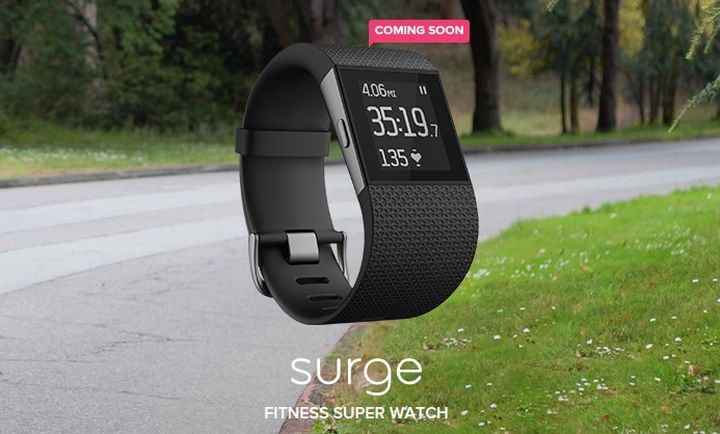 The Classical latch itself, but it is implemented to prevent the unit from dropping to the ground. Bracelet Fitbit Surge securely held on the wrist, hardly shifted to the side, even with strong flapping. Because of this it will be comfortable to use – in the classroom will not have the fear that the fitness tracker was somewhere behind.

The design Fitbit Surge is consistent with the highest standards and a black version can be worn even business people who almost can not afford to appear beyond the threshold of the house, without a business suit. For younger audiences, loving all bright and beautiful, offered two other options – blue and orange. See all the color schemes, thanks to a slightly rough texture strap, quite interesting and attractive.

Not all fitness trackers can find a good screen, which will be useful for viewing information, consisting of more than three characters. The Fitbit Surge solved this problem by installing a high-quality and large enough screen, working in black and white. At the same time, not to increase the flow of the charge from the battery, use modern OLED-technology. It is possible to achieve an optimum combination of efficiency and high-definition images.

Fitness Tracker Fitbit Surge perfect lovers of cross-country run, because it can monitor and display coordinates, allowing to move clear of navigating. This is useful for those athletes who do not like to just move and do it consciously as possible, achieving their goals. The results, along with the time spent jogging, distance, heart rate, and many other interesting indicators can be viewed on a special screen directly during a workout.

Developers used Fitbit Surge most advanced technology available to achieve maximum results. So to track heart rate is no longer required wristbands, worn on the chest, instead, everything you need is built right into the bracelet. Special LED shines through the veins and on the basis of the results, displays the current heart rate. We should also note that to achieve truly relevant reality data allows the strap through which the bracelet fits snugly to the skin.

The advantage of such an opportunity for athletes is obvious – they will always be able to “squeeze” the most out of your workout. If you may feel that the body is already at the limit, but the heart really only accelerates, it will be possible to push, increasing the load. And vice versa – the device shows that it is time to lose the rhythm a little bit, so as not to burn out in the middle of the track. 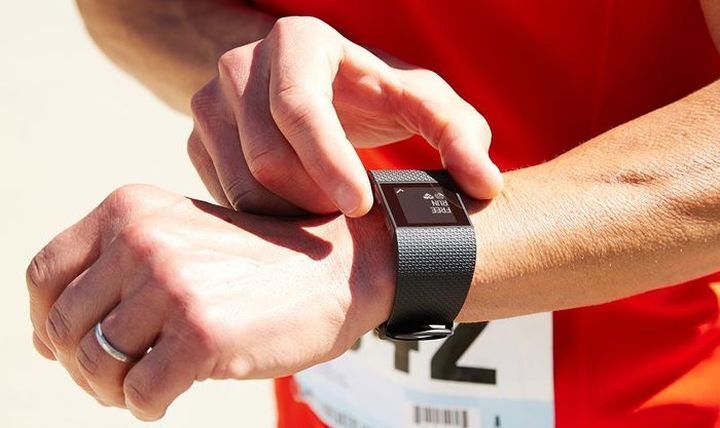 Display bracelet Fitbit Surge used as much as possible to always show the wearer all the most important information. Because of the eight built-in sensors, the device monitors in real time the number of steps, distance, heart rate, activity and inactivity minutes, calories burned and more. When this switch between different statistical parameters at any time. 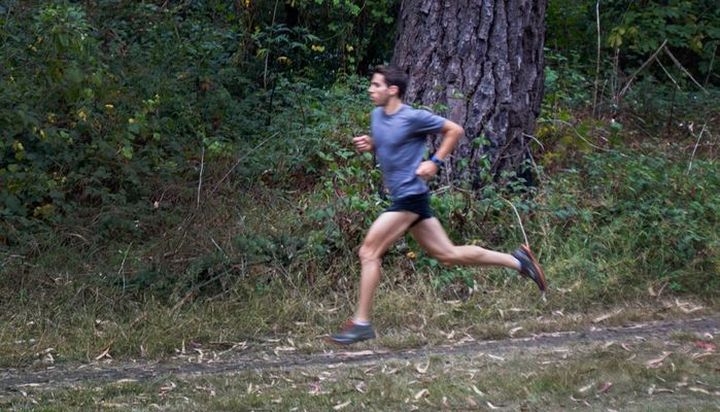 The device Fitbit Surge review supports the ability to track the performance of different types of workouts. This is quite useful for all-rounders or just athletes, daily exercise to achieve different results. This functionality allows you to save the results achieved in different directions and then set new goals and achieve them. One of the interesting features worth noting jogging track, mixed training exercise on the heart. Also supports other sports, which allows everyone to find the most suitable mode for him. 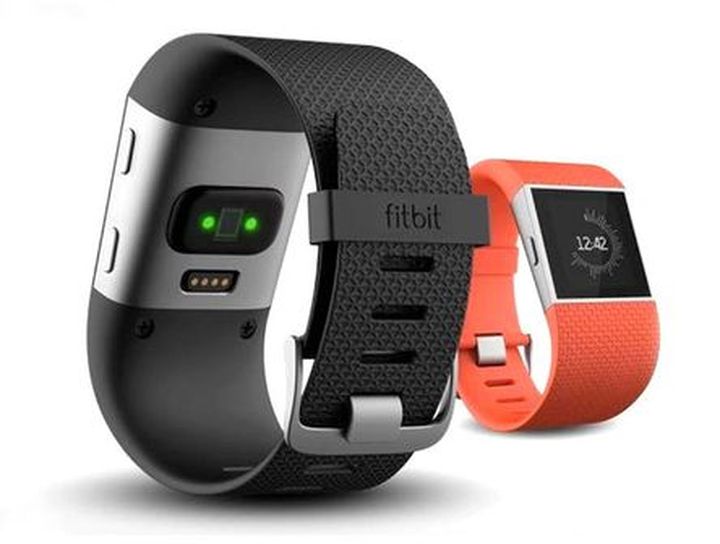 We should also mention the alarm function built into the bracelet. It is designed to maximize the quality of sleep. The device monitors the Fitbit Surge sleep phase, choosing the most optimal for the awakening. This bracelet keeps track of the carrier, determining the level of activity and heart rate when the night came and started sleeping. As an alarm clock serves vibration which gradually increases. This allows for optimal soft awakening get out of sleep by increasing efficiency throughout the day. We should also note that the information is transmitted to a computer or smartphone, where you can watch last night, considering how much sleep was healthy and strong.

Fitbit Surge: Work with your smartphone 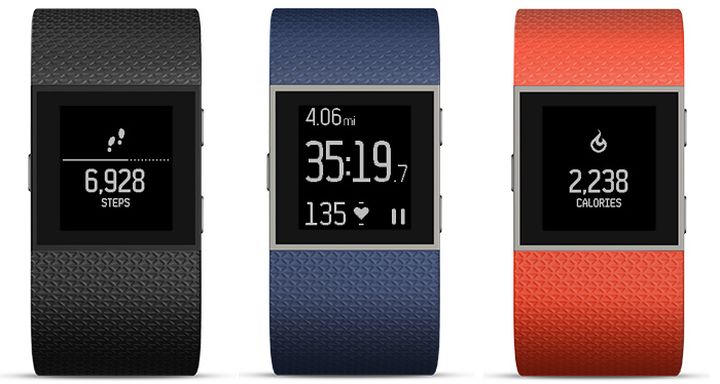 Fitbit Surge device is optimally suited for modern people, who often use the smartphone. It implemented the functionality that is more peculiar to intelligent hours than a sports bracelet. So, using the push-button control and a small display, you can receive up to date information about incoming calls and text messages as well as switch the music on the paired device. Of course, dial a reply SMS will not work, but look at the entire smartphone bag to find – came advertising or sending something important, do not have to.

Bracelet Fitbit Surge is optimally suited for use in a pair with any modern smartphone. Special application that will collect information in real time, to represent it to the user in the form of charts and help to set new goals, is already available to more than 120 of the latest generation of smartphones based on iOS, Android and Windows. 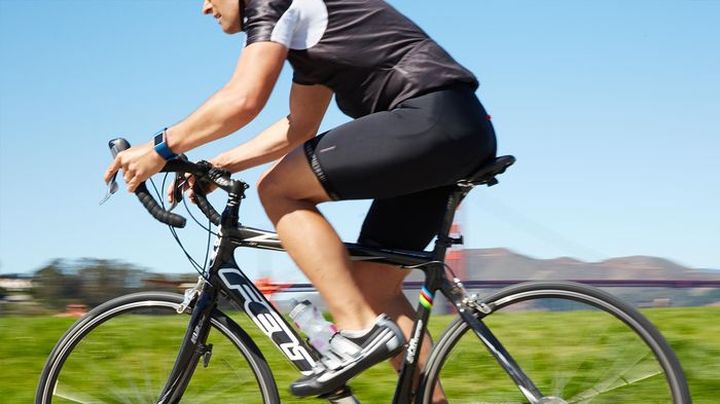 Do not forget the developers and for those who prefer to use an older technology. The owners of older phones can synchronize your bracelet with a computer, transferring all the information collected on him. For desktop systems, a special program with the same functionality.

Another strong point of the new device Fitbit Surge was the battery life. Due to the fairly capacious battery and the use of efficient technologies, the user will not have to run every night at the house to put her bracelet on the charge. Instead, Fitbit Surge offers up to seven days of active use at no extra charge. And this term is achievable in a state where the maximum disclosed all the possibilities smart bracelet. If the owner will use only a strictly limited set of functions, it is possible to increase the battery life. 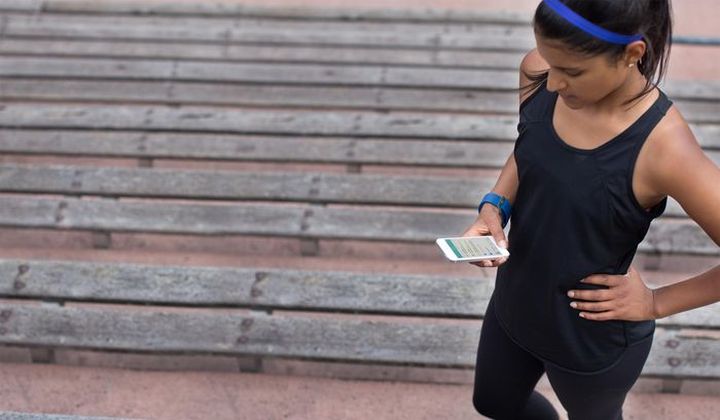 Due to the wide functionality, the new bracelet Fitbit Surge looks promising and helpful for users who set themselves different targets. It features an attractive appearance, but because with him will not be ashamed to appear in public, even a business person, forced to walk every day in a suit. This advanced technology used to create Fitbit Surge, provide high efficiency with respect to battery power while maintaining a very broad functionality. In general, the device can be recommended for athletes and ordinary people leading an active lifestyle.