Today we got to the test, probably the most serious portable speakers, which we’ve ever tested – acoustics Infinty One. It’s all grown-up, starting from the brand, ending worth. The trick is not for everyone in every sense, so buying it is necessary to know exactly where to place the device. During the review, I will share my thoughts on this subject.

It so happens that acoustics Infinty One hit me up of IFA 2015 in Berlin, and all was well. Confusion in my tests, and, as it turned out, in the conclusions regarding the One made the announcement of the new acoustics JBL Xtreme. Promise manufacturers with respect to both devices at different, but possible, and the price is still pretty close. In this regard, in the course of this review, I will constantly make reference to the new product by JBL and compare it with the hero of today’s article. There is no alternative way for myself, I do not see.

I would not say that the new owner is waiting for something special when unpacking the device. Plain packaging of cardboard and quality printing. All this is typical for almost all products JBL, Harman Kardon and other brands under the wing of Harman. 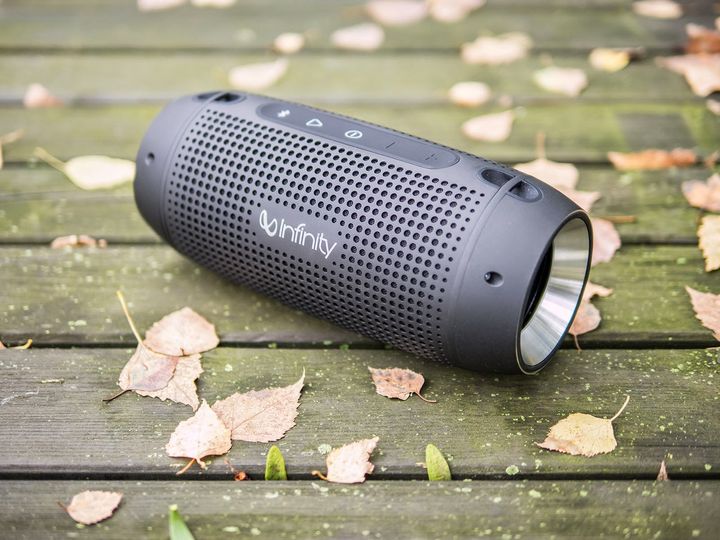 And on the inside of the box, and on the Internet at all walks of pictures acoustics Infinty One in analysis or, so to speak, under X-ray. Clearly, the company’s engineers are proud of the interior decoration of their offspring. But we’ll deal with this later.

The bottom compartment hides a rather big size of the power supply (13 V, 1.7 A output). The main body of the charger only American Fork, but inside the box was discovered adapter for our outlets and English. With a complete set is finished. We turn to the second most important nuance device.

And immediately a loud statement. When creating acoustics Infinty One designers have collaborated with the band, Linkin Park. So stated on the packaging and, after I found this inscription, objectivity in the review should not wait. Joke.

Musical creativity LP on top, so we have a great chance to make even in the design and partly talents Bennington, Shinoda and other members of the group. Customizable to criticism!

There is no pretentious premium. Black case, marked perforation, any designer stuff scattered all over the body – in general, a mini-nuclear bomb, for sure. It looks awesome and it’s good.

At the top are the physical (non-touch) key management. Their playground rubber, so the icon buttons slightly flex under pressure. The buttons have a white-lunar light. It is not disabled when the activity of the gadget, which is useful during night parties to accidentally hit it and click on the next track, without turning off the device and does not accidentally spoil everything. Not only the volume keys are highlighted, which is strange. In the dark, the party would be helpful to see exactly where you press when you want to make a louder or quieter. Why developers are deprived of the possibility of users.

In addition, its backlit features and company logo. It looks like this, of course, great. 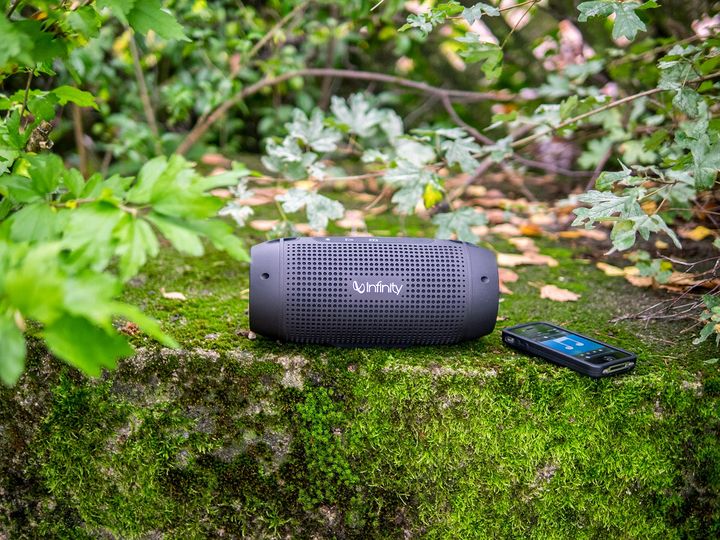 And a little more detail about control. The playback button is also responsible for the navigation of playlists: for the single press should switch to the next track for a triple – a return to the beginning of the song.

On both sides, there are two loops for carrying strap. With the last column, you can take with you and, given the size and the weight carried on the shoulder.

Did we look at the weight? I think it is clear that even in a backpack gadget starts rears its pretty soon. Of course, if in addition to speakers in your carry-on baggage will be something else. I have it, SLR, MacBook Air 11”, diary, laptop battery, several cables, and adapters – in short, I’ll pass. The acoustics Infinty One carried in the trunk of the car – everything went perfectly. Was it accurate and, by the way, in this case, really matters.

The fact is that the body is made of acoustic material is very similar to ceramics. In your place, drop the column or put in a box with tools, I would not. All this is fraught with consequences.

And the surface of the device has properties to get dirty and collect dash of unknown origin. Well, they are easily erased (pictured right).

On the front side, you can see the corporate designation, and on the opposite side area NFC to quickly connect speakers to the sound source (smartphone, tablet, etc.).

On each side of the column has a passive radiator that further resonate to the beat of the music and the whole process looks great.

On the inner side of the metal inserts, emitters present obviously beauty.

All connectors are hidden under a rubber flap closer to the bottom of the device.

Above the cap is a strip of LEDs that indicate battery level while charging. It would be nice so that they are highlighted during playback to know, so to speak, how much time is left for the party. 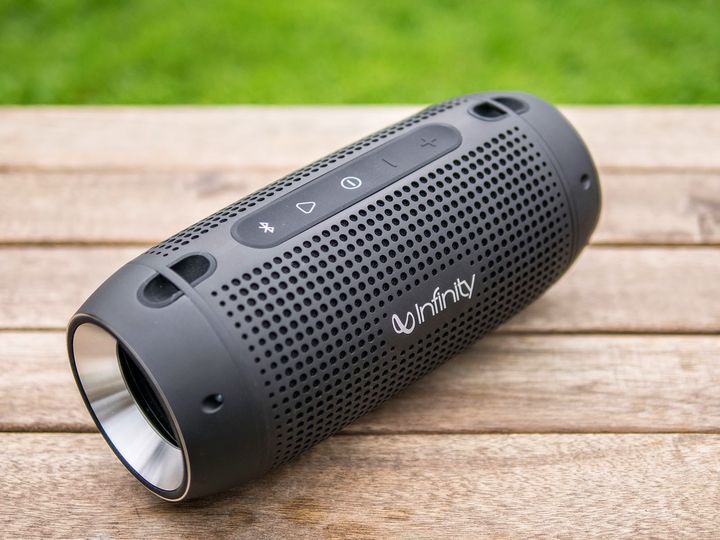 Portable acoustics Infinty One has one correct position for installation – horizontal. He was not riding in different directions as it may seem if you look at the stretched-rounded shape of the gadget. Below there are two rubber feet.

Of course, you can install the gadget and vertically. Most interesting is that the quality of sound is practically no effect. The main thing – be careful. Still push gadget from the place is not working.

I have already mentioned that the gadget is connected, mainly in two ways: via Bluetooth (version not specified) or by cable.

There is another option, for example, accelerated – to use NFC-connection. All this, of course, great, but and “blue tooth” speaker is connected quickly and without error to any audio source. The apparent need for this kind of communication there.

The keys on the body acoustics Infinty One 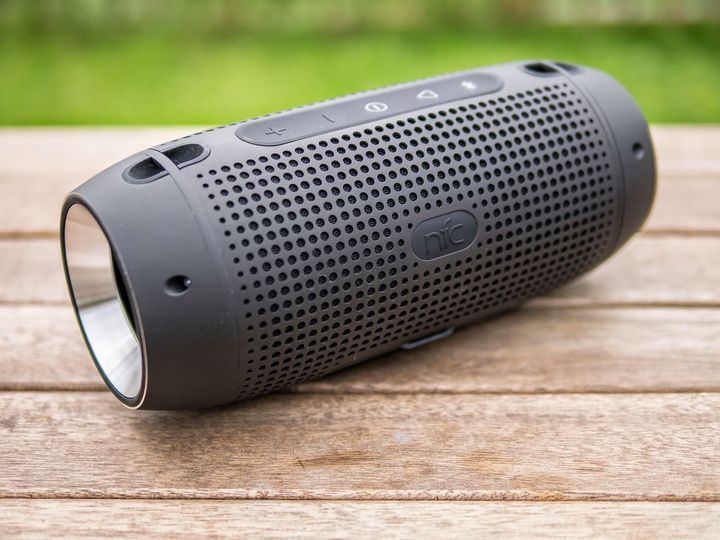 By the way, if the heater was turned off in conjunction with the state of the sound source, then the next time it automatically Lever will be immediately ready to play the sound. It is convenient and forcibly arrival acoustics Infinty One is not necessary.

It is stated that the body of our speaker is resistant to penetration of liquids on it. Check it, I did not and do not advise you. It seems to me that it is only about protection against splashes and light rain, which will have time to lightly wet the column until you have time to hide it under a roof. On longer count is not necessary. By the way, this parameter has recently presented new JBL Xtreme clear winner. The column can even be rinsed under running water. And rain it certainly does not need saving. Tropical showers are not in the bill.

Rubber plug on the housing acoustics Infinty One 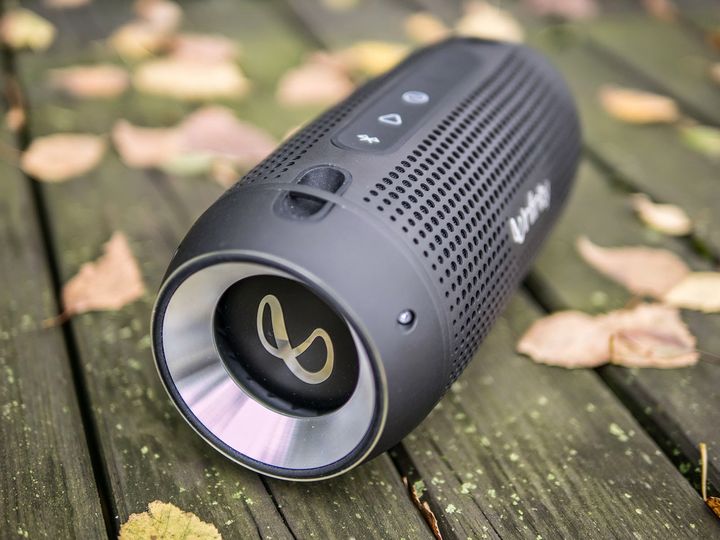 I almost forgot to tell you that the device has a built-in microphone. Thus, it is possible to answer calls (something like Hands-Free) and even redial the last number in the call log. I just do not recommend strongly to move away from the device during a conversation. One-meter – this distance would be sufficient for a comfortable communicating both subscribers.

The main feature of the speaker – a four-speaker diameter of 45 mm each, which are arranged at specific angles and thereby spread sound at 360 degrees from the columns. A two passive radiators laterally reinforce the bass frequencies. I must admit that the above – it’s true, but with a caveat. One really does not need to be installed on the floor or a wooden rack for added resonance. But the sound is not symmetrical. In other words, if we close one side of the column with his hand, and then do the same trick with the other side, it becomes clear that the sound uneven. One side is still louder sounds, and the other, as it were behind her. However, the effect of sound on all sides still there. Just do not put close to One something of a party and everything will be the beam.

Acoustics Infinty One inside, dynamics, and characteristics

It presents the entire Spector frequencies. I am very pleased that there is no emphasis on any specific frequency. 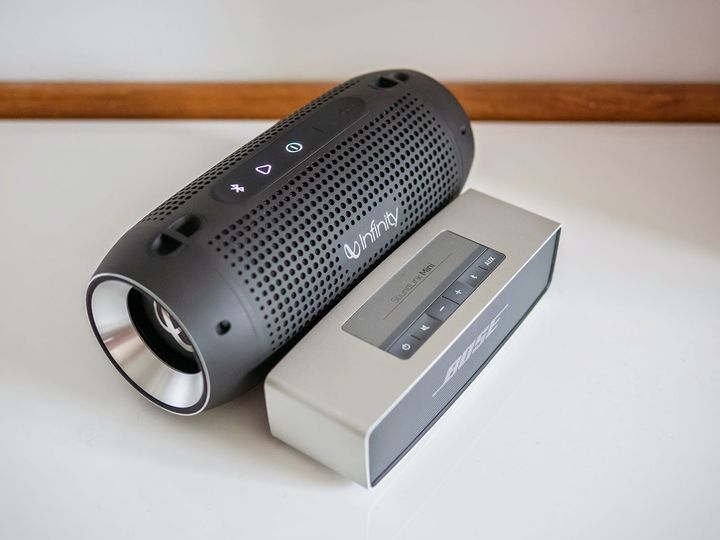 In the presence of both high and middle and lower classes as well in sufficient quantity. No overload, which means you can even listen to music relatively heavy. The acoustics Infinty One copes quite well with playing rock and heavy metal. Death metal – this is, of course, will not. However, a simpler acoustic music “eats” and without problems.

The volume is sufficient to ignite a good, home party. But for disco in the school gym device will not work as expected.

Another plus is that there are no blockages, wheezing, and other crime, even at maximum volume. On the other hand, for a device of this level it would be unforgivable. 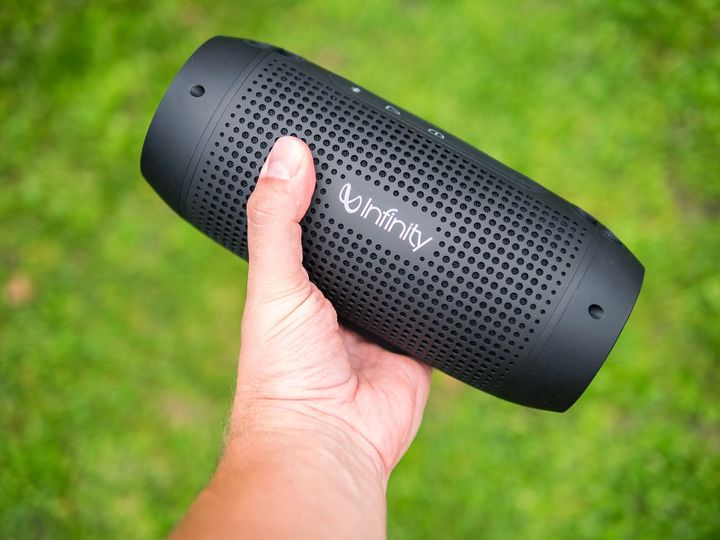 During playback, the volume is synchronized with that of the value of the sound source (at least, so it was with the iPad mini), and do not need to double up the volume on the device, and then another, and on the column.

When you play, you can put the column vertically, no significant changes will occur, but you already know. And besides, the side ends have a rubberized base, so that they are not afraid to scratch, setting the gadget vertically.

The built-in lithium-polymer battery has a capacity of 5000 mAh. Against the background of the recently introduced JBL Xtreme – it looks like a weak, nevertheless speaker can play music continuously for 7.5 hours. In general, according to the official statement of the autonomy of the column up to 10 hours continuous play mode audio content. Naturally, this figure is achievable only when the volume on average. Transfer content via Bluetooth in some special way to autonomy is not affected.

In addition, the device can be used as an additional source of power for your smartphone, tablet, camera monopod and so on. For this purpose, the body recovered a USB-port, output indicators which are as follows: 5 V, 2.1a. In other words, your gadget charged fairly rapidly (half an hour on the average smartphone).

I will try to summarize briefly. The acoustics Infinty One looks good, very copes with its main task – it plays music that’s only worth a very considerable amount – the price of Infinty One is 300 US. On the other hand, we are dealing with quite a reputable brand, for which, of course, have to pay extra. And against Infinty One I can say that this is not so unreasonable.

Gizmo is certainly good, but the fit is not all. It is necessary to connoisseurs, ready to make some compromises that impose conditions for hiking while One is used for such cases. Home there are other, much more interesting proposals. 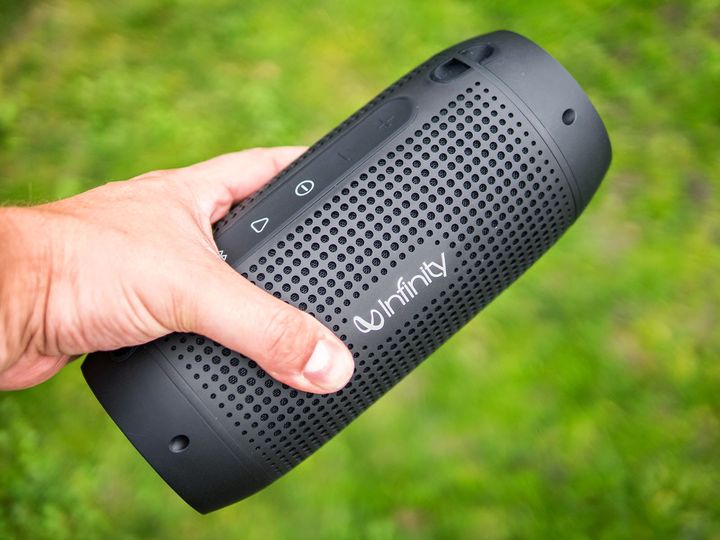 However, due to the recent market entry JBL Xtreme I’m confused. This column is more powerful, more interesting in terms of features and performance, but costs less. I think that One, you can recommend buying only if you know exactly what size Xtreme – this is for you too, and dimensional characteristics of acoustics Infinty One – at the time. Well, the issue price, of course, not worth it.

And at the end a little fly, literally at the tip of a spoon. I did not like the fact that there is no additional set of the cable: no 3.5 mm or Micro USB – USB to charge third-party gadgets. About carrying strap gadget, I am silent. And here it is somehow sad, given the positioning and cost of the device.