Samsung, finally decided to face the iPad Air 2 face to face, rolling to market their new flagship tablet Samsung Galaxy. And while the tablet Samsung Galaxy Tab S 10.5 offered 10.5-inch widescreen display that sets it apart from the devices Apple, the Galaxy Tab S2 9.7 is the same size, shape and resolution of the display as iPad: 9,7-inch panel with a resolution 2048 x 1536 pixels and a ratio of 4: 3.

You could say that imitation becomes the sincerest form of flattery, and as long as we remain a long time fans of the ratio of 4: 3, the opinion was divided; Displays 16: 9 and 16:10 aspect ratios may offer benefits for watching movies, but with rectangular panels Tablet 4: 3, as a rule, you are much more natural feel in the hands of the tablet while reading or web-surfing. Along with the compact Samsung Galaxy Tab S2 8.0, we offer you an overview of tablet Samsung Galaxy Tab S2 9.7. 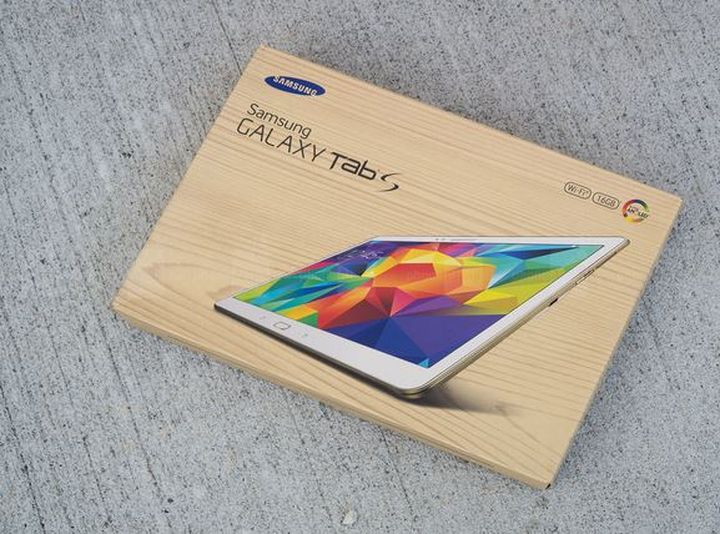 As this flagship tablet Sony, you might think Xperia Z4 Tablet as a direct competitor to tablet Samsung Galaxy Tab S2 on the Android, but because the Z4 is much more expensive (and comes with a keyboard), it is in its own class. Google Nexus 9 is much better suited for the role of a competitor; it also has a ratio of 4: 3 with a resolution of 2048 x 1536 pixels, but it has a slightly smaller display – 8.9 inches. Google tablet will cost you the same price, but due to time, the tablet involves substantial discounts in some shops.

The tablet Samsung Galaxy Tab S2 makes a great first impression. Its light weight provides a comfortable reading with hands, Nexus 9 seems in comparison. iPad can boast advantages in the areas of build quality, thanks to the hard touch the back panel, but the artifacts appear on the screen when you use even a slight pressure.

All three have impressive tablet Samsung Galaxy screens, and preferences are reduced solely to personal taste. Samsung Galaxy Tab S2 uses AMOLED-technology, like all displays of this type, it offers a delightful contrast: because it can show the absolute black, our tests showed a contrast ratio of 1: 1. In testing Galaxy Tab S2 9.7 color calibrator, the display plate reflected 100% color gamut sRGB. Nevertheless, there were some reservations when compared side by side with the test image on the iPad Air 2 and Nexus 9. The image jumps on the screen like Samsung, thanks to the bright colors, but look closer and you can see a yellow tint; a common complaint in the AMOLED-display. Apple iPad Air 2 and HTC Nexus 9, on the other hand, do not offer the brightness of the stunning, however, their colors seem more realistic. Turning off Active Display on the Galaxy Tab S2 make the image look flat and lifeless. 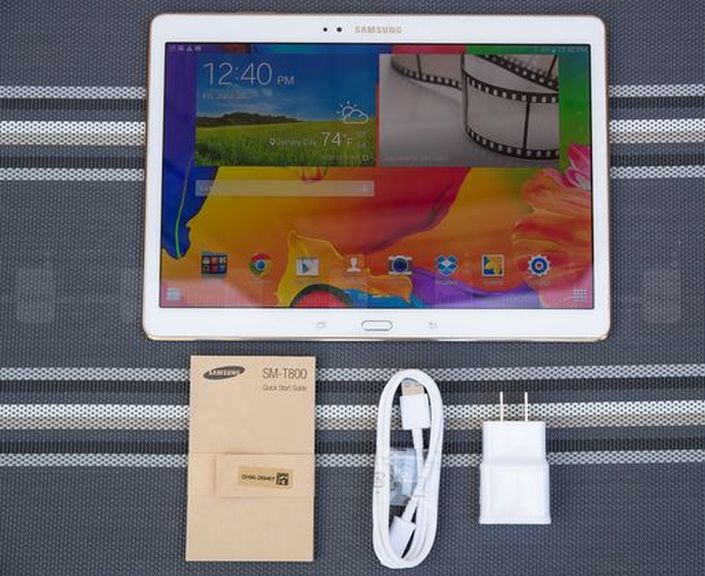 The new tablet Samsung Galaxy Tab S2 equipped with 8-core Samsung Exynos 5433. These include four cores with tact 1,9 GHz for demanding tasks, as well as four cores clocked at 1.3 GHz designed to save battery power when working with programs without requiring the entire performance. Our tests have shown that the processor promises good, but not spectacular performance. In tests, the browser Peacekeeper, Galaxy Tab S2 scored 1012 points, which is twice less than in the Nexus 9 (2020) and the iPad Air 2 (2749). Similarly, the single-core test results are shown in Geekbench 1230 points, which is far behind the Nexus 1637 points and 1811 points 9 iPad Air 2. tablet Samsung rehabilitated several multi-core test, which showed 4194 points compared to 4516 points iPad Air 2 and only in 2818 Nexus 9 points. 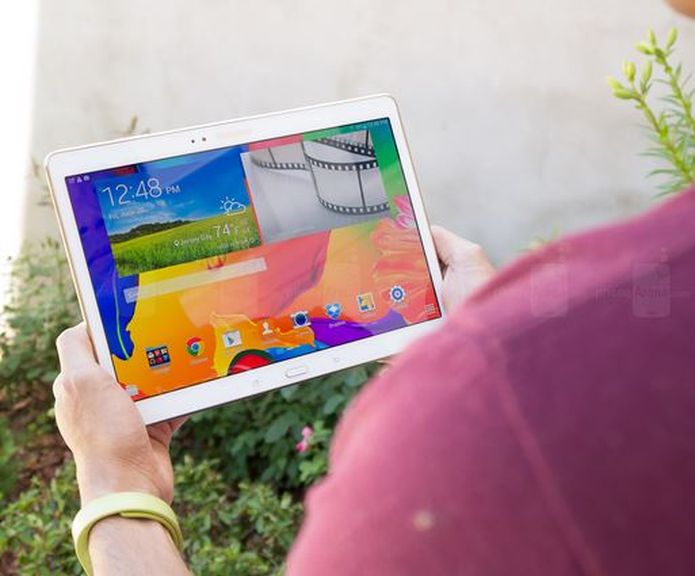 Review tablet Samsung Galaxy Tab S2 9.7: single-core performance of the tablet does not offer anything special, but the Galaxy Tab S2 clearly shows itself in the multi-core test and battery life.

And while low-power core overwhelmed tablet Samsung Galaxy Tab S2 single-core tests, they had a positive effect on the tests of continuous video playback, where the tablet lasted 12 hours 9 minutes; two and a half hours more than the iPad Air 2, but slightly less than 9 Nexus.

Subjectively, however, the tablet does not have any performance problems. 5 Android works surprisingly smoothly, no brakes or gaps were observed in the review Samsung Galaxy Tab S2 9.7. Some web-sites, like The Guardian, even seemed to run more smoothly on the Galaxy Tab S2, than on the Nexus 9. 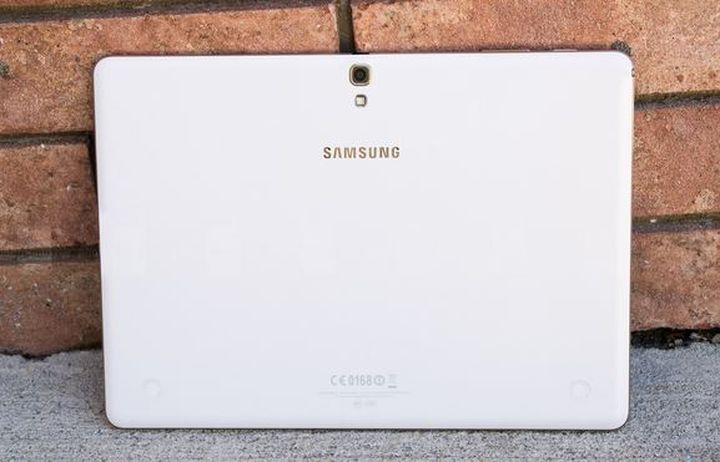 The operating system also offers some nice touches, such as its own system of multitasking Samsung. If you press the «Recent», some applications will show an additional icon in the upper right corner. His press will make the application attached to the screen; to the top if you use the tablet in portrait mode to landscape mode side. You can change the size and number of the applications on the screen. This only works with certain applications, but it means that you can view e-mail address, is looking for something on the map, or web-site, at the same time taking notes.

Zone – the area where the tablet Samsung Galaxy Tab S2 can not be compared with its competitors. On tests, GFXBench Manhattan, tablet Samsung scored just 959 points in their native resolution, which is far from Nexus 1942 points and 2331 points 9 iPad Air 2. Popular HeartStone great went to the Tab S2, but from time to time, the game showed a brief twitching; nothing like this had to watch the tablets of Google and Apple.

There is no doubt that the tablet Samsung Galaxy Tab S2 is an impressive tablet. He is thin and light, offers an excellent display, as a rule, as long as you are willing to put up with a slight yellow tinge image for a stunning contrast. However, it takes an odd position in the market tablets. 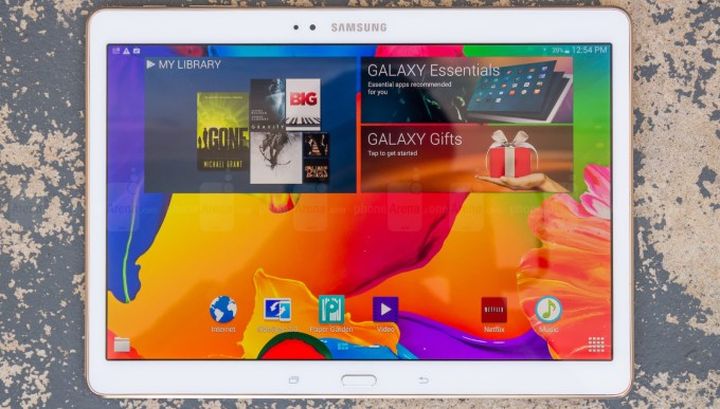 It asks the same price tag that the iPad Air 2, which offers better performance, but the worst margin of autonomous work, both expensive tablet on 20,000 Google Nexus 9, which is not so good in some respects, but offers excellent performance. However, if you can not stretch your budget to 50,000 for the Sony Xperia Z4 Tablet, but you want a high-end Android-tablet, the new Samsung Galaxy Tab S2 9.7 becomes an excellent purchase. We would like to recommend a new tablet Samsung. If you think that this is not your thing, read our buyer’s guide.