Segment Yoga is a favorite for many. He was chosen by fans of non-standard solutions, as well as those who prefer universal electronic gadgets. This time, we will talk about laptop Transformers Lenovo Yoga 700 – actually improved the analog Lenovo Yoga 3, with which we have already managed to introduce you before.

Brand Lenovo, undoubtedly one of the most recognized and respected in the world of laptops and mobile equipment. His line is regularly updated with new models, thus offering the user a wide range of products. The range suggests laptops for every taste, from budget to luxury, so everyone can choose for themselves something suitable.

The appearance of the previous model the new product has passed a legacy. However, along with the advantages of the device and took over some of the shortcomings, which will be discussed below. Thus, the device is available in convertible 2-colors: silver and black. It is amazing the lack of bright orange color, which often appears in the model line of hybrid devices Lenovo. However, the two classical variations are too bad, and, importantly, always in fashion. 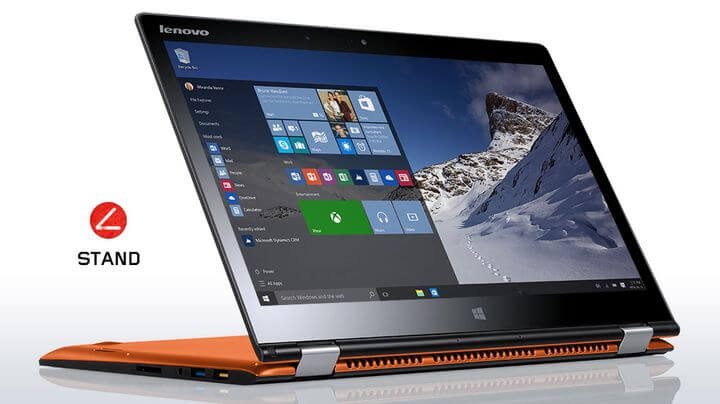 In the structure exclusively used plastic. Undoubtedly, aluminum here would look a lot better, but in this case, this material no major complaints, moreover, it is non-staining. The design of the naked eye can be traced minimalism Thus, the cover can be seen only the company logo, nothing else here. In the traditional mode, “laptop” is also available to the user screen, surrounded by a narrow frame and ergonomic keyboard, which looks stylish and discreet.

Incidentally, we recall that the operation of the laptop Transformers Lenovo Yoga 700 involves four modes: In addition to the above, it is also a tablet, console, and presentation. The transition from one mode to another does not take the slightest trouble, just something and you need that to install the upper part of the gadget to the desired angle and secure this position using metal hinges. 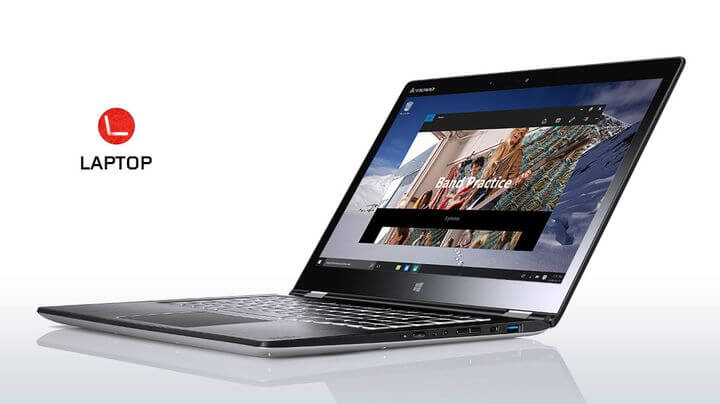 Speaking of the past: we have recently talked about the Lenovo Yoga 900 with a swivel mechanism in the form of a bracelet with a lot of stitches. So, despite the fact that the hero of this review, the traditional loops, they are no less strong and high quality, which cannot but rejoice.

Well, now about some of the shortcomings that we have observed and Lenovo Yoga 3, in particular about the quality of the assembly. Because of the small thickness (18 mm) cover flex when pressed. As a result, of such exposure on the screen appear in divorce, and this is not the best way affects the quality of the image. The rest of the claims are not all the details are well adjusted, in the transformation do not appear any other sounds in the form of scratches, and also no backlash. Oh yeah, almost forgot about the dimensions of the new items! Its length is 335 mm, width – 230 mm while the weight is 1.6 kg. So what about mobile gadgets is not necessary, for example, in tablet mode it will not keep long? By the way, an upgrade is possible, but it is limited to the modernization of the hard drive and RAM.

Screen laptop Transformers Lenovo Yoga 700 – an element that is central to each of the modes, it is important that it does not disappoint. In this case, we have a 14-inch display with a Full HD-resolution and pixel density of 276 ppi. The contrast ratio is at the proper level – 980: 1, brightness, things are not so rosy – a maximum of about 225 cd / m2. Compliance with the sRGB standard is quite modest – only 61%. In essence, such a screen is quite enough; the picture looks natural, fairly saturated and bright. However, by operating in direct sunlight, it is better to abstain because the image quality significantly deteriorates. 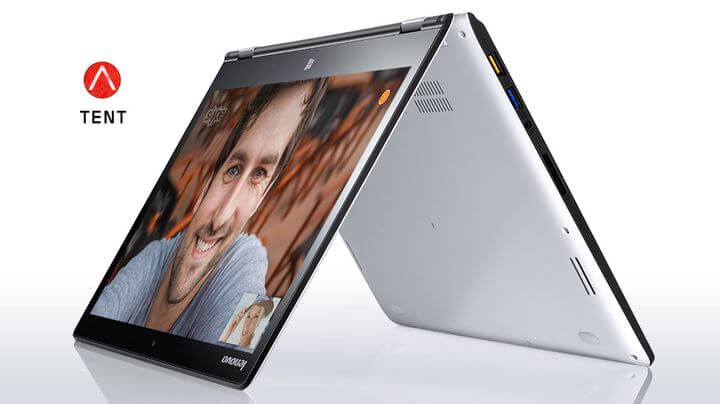 Matrix IPS, of course, makes itself felt: the viewing angles are excellent. And this, of course, very important, given that the regimes of the laptop Transformers Lenovo Yoga 700 involve the use of different angles. As to the touch input, then it will not have any problems. The commands are executed without delay, capacitive screen supports up to 10 simultaneous touches.

Two stereo speakers Dolby does not please the true music lovers, but because the laptop Transformers Lenovo Yoga 700 is not being positioned as a multimedia. At the peak sound is decent, not annoying rattles. Bass and treble, of course, is not enough, however, for everyday play movies or music acoustics will be enough opportunities. Besides, one can always use the headset, which greatly improves the sound quality. 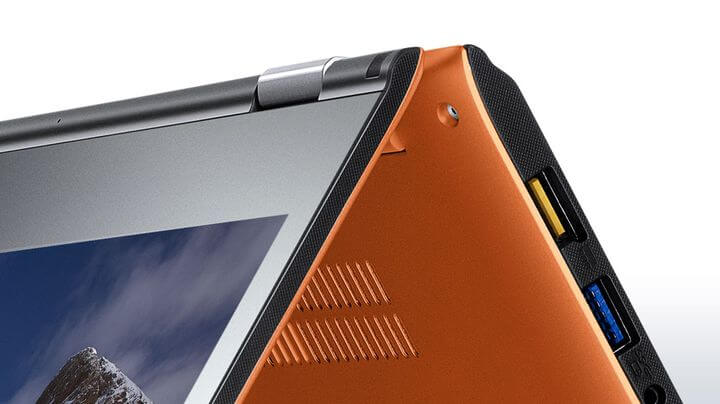 The webcam in the laptop Transformers Lenovo Yoga 700, of course, there is, however, its resolution – only 1 megapixel. On the other hand, we can say that such a low figure is found in many of today’s laptops, so specifically to this model, no complaints. Webcam you can use for video calling, say, on Skype, but when taking pictures, you should not rely on the high quality and detail.

The manufacturer provides the user with as many as four scenarios using this hybrid PC. Although the keyboard is used only in one mode – a traditional “laptop Transformers Lenovo Yoga 700 “, it must be admitted that it activated more often, and therefore assigned to the keyboard is not the last role.

So, what do we have? In fact the tool for typing in the same laptop Transformers Lenovo Yoga 700 loses much in the line of ThinkPad, so those who have the opportunity to compare, definitely feel the difference. But in general, the keyboard is not bad, its only drawback – subsidence in the central part, but it manifests itself only in the case of over-intensive printing. Otherwise, everything is excellent: keys are made on island principle; they have a convenient square shape, with a rounded bottom. 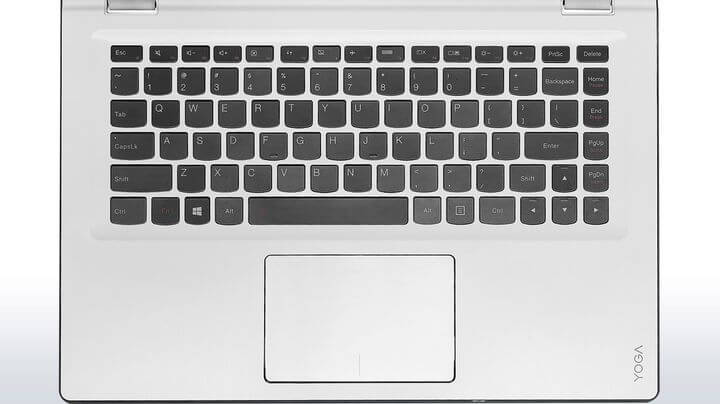 Nampa, of course not, but the 14-inch form factor and it is not peculiar. But there is light, however, with only one level, but it’s better than nothing. Incidentally, when the laptop Transformers Lenovo Yoga 700 opens to 190 degrees or more, the keyboard with touchpad is automatically disabled to prevent accidental operation.

It has a smooth plastic surface and large enough size. The pointing device supports multi-touch gestures, such as zooming, scrolling, etc. The touchpad is no physical keys, but there is a vertical divider which separates the alleged right and left mouse buttons.

The laptop Transformers Lenovo Yoga 700 – 14ISK (80QD00A3RK) comes with Windows 10 Home 64-bit, which is perfectly adapted for touch control. As the processor used in this configuration Intel Core i5-6200U with two active nuclei. It is based on modern architecture Sky lake and operates at frequencies of 2.3-2.8 GHz. CPU is made according to the norms of 14-nm process technology and has received 3 MB cache level 3. In addition, Core i5-6200U very energy efficient, its TDP is 15 watts. This chip is considered to be quite powerful, it is designed to perform many tasks, including demanding.

The graphic shows video accelerator is NVIDIA GeForce 940M with 2 GB of memory standard, DDR3. It received 384 shader units, supports DirectX 11.2 and Shader 5.0, and the frequency of this card can vary within 1072-1176 MHz. As part of the game battles, laptop showed well enough that many modern toys went without problems, the only thing that is mainly on medium settings. For example, in Metal Gear Solid V can be played at a frequency of about 35 fps, pre-reducing the resolution to 1366×768 pixels. As to the more outdated, say, 2013, then they are easy to start even at maximum settings.

By the way, is suitable for everyday tasks Integrated Graphics Intel HD Graphics 520. Its capacity is sufficient to surf the web, work with documents, etc.

In this case, the RAM 8 GB standard DDR3-1600 MHz and this amount are the maximum possible. The data storage system provided a solid state drive 256 GB, which is more than enough for a 14-inch device with a sufficiently powerful stuffing.

Let us consider how things are going with the interfaces of the laptop Transformers Lenovo Yoga 700. So, on the right side you can see the port USB 3.0, video output Micro-HDMI and physical buttons: the power button, adjust the volume rocker, orientation lock button and the display button Novo, which launches the application OneKey Recovery, which allows restoring the system in case of failure. 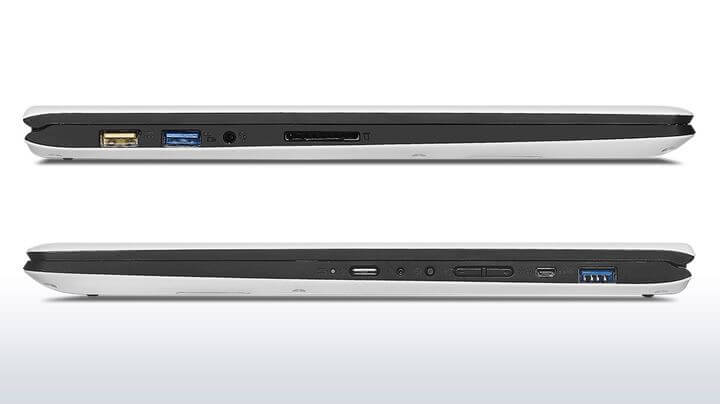 Front and rear some interfaces available. With regard to wireless communications, they are represented by Bluetooth 4.0 and Wi-Fi standard 802.11ac. 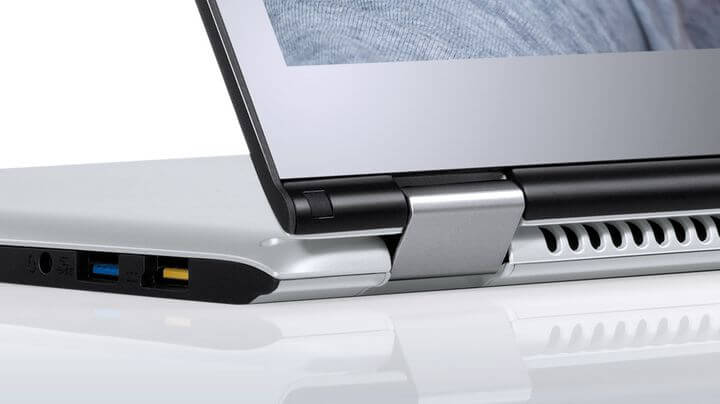 The laptop Transformers Lenovo Yoga 700 has a removable lithium-polymer battery capacity of 45 Wh. During testing of autonomy following results were obtained: in simple, with minimum brightness, the device worked for almost 13 hours; web surfing able to carry out for 6 hours, and the maximum load – not more than one and a half hours. Not to say that these figures were recorded, rather they mean. Nevertheless, in its autonomy laptop, Transformers Lenovo Yoga 700 is not inferior to its competition, and many even leave behind.

It is no secret that the brand Lenovo, like many others, often “sin” that released in the mobile market is not completely new models and remodeled a bit old. Something like this happened this time: laptop Transformers Lenovo Yoga 700 suspicious strongly resembles Yoga 3, although the differences have, of course, available.

In fact, we have a 14-inch convertible device that can successfully operate in one of four scenarios: a laptop Transformers Lenovo Yoga 700, tablet, console and presentation. Do gadget stylish looks, high-quality screen, and quite a comfortable keyboard. In addition, the inside is hidden a powerful stuffing, which allows not only to carry out simple daily tasks but also to run more demanding programs.

In general, the laptop Transformers Lenovo Yoga 700 is made in the best traditions of Yoga-segment. By the way, its price is also consistently high, because of this packaging, which implies the presence of a discrete video card, will have to pay about $ 1,000. Modification only with integrated graphics will cost about $ 50 cheaper.