South Korean manufacturer of flat panels, the company LG Display Co. presented Tuesday removable panel of organic light emitting diodes (OLED), which is attached to the walls, renewing its program for the production of high-level displays, because management sees in this segment of the prospects for growth in the future.
55-inch panels wallpapers OLED, presented as one of the new works of art engineering company, it has been shown to the public at a media show. Its thickness is only 0.97 mm, and weighs 1.9 kg, so that such panels can be easily attached to the wall using magnets, for example. The new product is much thinner than the current flagship – 55-dyuymovaoy OLED panel from LG Display, which was 4.3 mm thick. LG Display also offers demonstrated a convex panel OLED, mainly used for large-scale digital display materials for outdoor advertising. 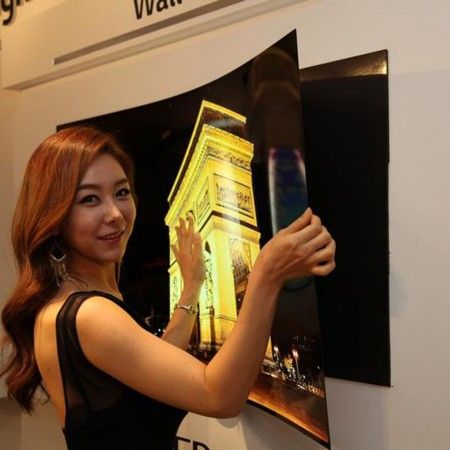 Manufacturer diode panels sought to move to production phase OLED as the next milestone in its development. Advanced technology helps to make TV screens, which will be much thinner and much lighter than liquid crystal displays (LCD). San Deog Yeo, head of OLED at LG claims that its personnel will be able to increase the production of OLED since the third quarter of this year to substantial volumes, which may be enough to meet the demand of customers not only in Korea and Asia. “We need to supply a sufficient amount of product to our customers, it is desirable since July or August, as we hope will soon take an impressive share of the market,” he told reporters at a press conference held after the exhibition.

Among the objectives of units – enter the rate of sales of OLED panels in the amount of 600,000 units this year and 1.5 million units in the next 2016.