The phone ZOPO knew among other brands in China for its pleasant price – performance ratio and true characteristics. A year ago, cell phones ZOPO flew like hotcakes, and now the brand has become more serious and the number of new models seriously diminished, which has a positive impact on product support. Smartphone ZOPO ZP999 or ZOPO 3X gained considerable popularity and now we face a new flagship Jr. – the 5-inch phone ZOPO SPEED 7.

On both sides of which are painted characteristics of the device.

Set by today’s standards is quite rich. In addition to the standard USB – MicroUSB cable, charger 5 volt 1 amp and a whole pile of documentation, put even a simple headset and corporate safety glass. Yes, it is glass, the film conveying bundled only with inscriptions.

To date, 5 inches phone ZOPO is the ideal choice of the smartphone, which combines a large enough screen with an ease of use with one hand. The phone ZOPOSPEED 7 is no exception, in his hand, he is just gorgeous, and easily fits in a pocket of jeans. Plastic buttons have a nice tight turn. Squeaks and backlash in the machine are not found. 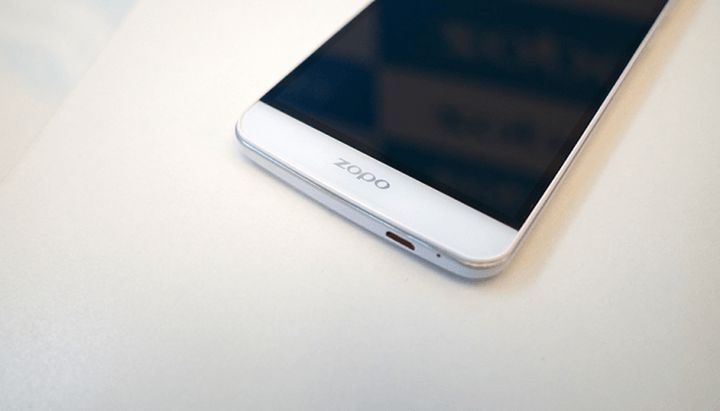 The front of the phone ZOPO SPEED 7 causes the most complaints. On the one hand, everything seems in place – sensors, front camera, earpiece and light events. But on the other – a huge bottom margin is occupied exclusively logo phone ZOPO, the onscreen control buttons here. It is unclear design course, too much useless space on the front panel is just astounding.

The back panel completely normal and contains the main camera, logo, LED flash and the slot of the main speaker.

On the left side, there’s nothing on the right swing is the volume and power button. 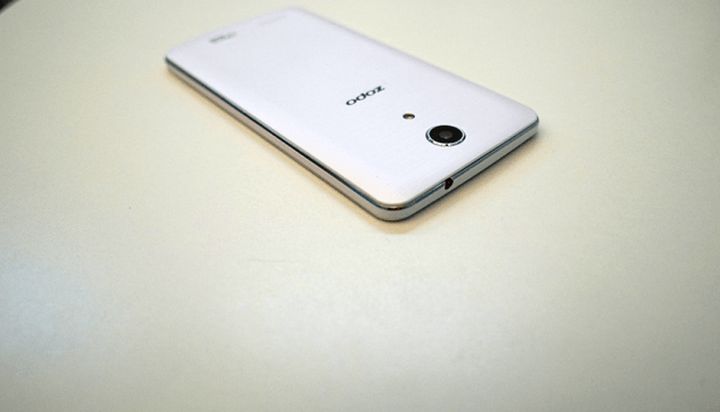 At the top end is 3.5 mm jack under the headset on the ground – only a microphone device, MicroUSB connector and a slot for removing the back cover.

Remove the rear cover is easy enough, it is provided on the seal.

Under the hood is a two slots for Micro-SIM cards and memory cards microSD. Downstairs is the main speaker.

The phone ZOPO SPEED 7 has a removable battery with 2500 mAh capacity fair. Some would say that this is not so much, but we must remember that the higher-capacity battery put on smartphones with screens 5.5 inches and above. The same iPhone 6S has a 1700mAh battery only. So for its 5-inch phone ZOPO battery capacity is ample, and living unit for two days with average use. 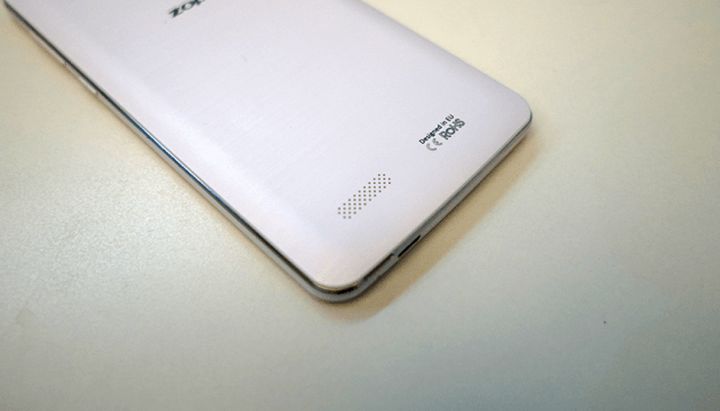 Schedule a smooth discharge. It should be noted that the result AnTuTu Tester is highly dependent on the stability and smooth flow device firmware. USB-tester confirmed the declared characteristics, showing a 2652 mAh.

In terms of display, I was very surprised in a positive sense. Although the company has not announced any phone ZOPO corporate display, he was extremely successful. IPS OGS FullHD screen, 5 points of contact with a stunning viewing angles. No color inversions and brightness decay is not here. As for me, the screen phone ZOPO SPEED 7 much better than the new flagship killer OnePlus 2. From software tokens immediately supported fine tuning color MiraVision, an adaptive brightness control and a wireless monitor. 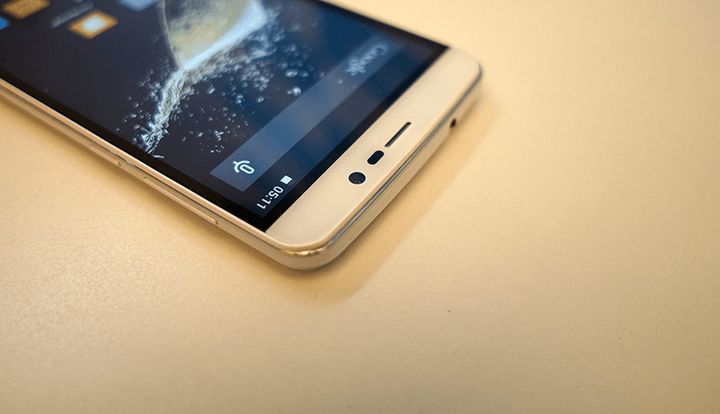 Sound built-in speaker on the current firmware I definitely disappointed, within three weeks of operation I was missing about 50% of incoming calls. Raising the volume level through the engineering menu to increase in volume and 70% of calls heard, but this is still not enough. This is a minus, and, as for me, is very significant. Perhaps in a future version of the firmware to correct him, but at the moment there is a lack of. Regarding the headphones, all elegant, with the right player JetAudio [Play Store] sounds smartphone just fine.

The quality of communication in the phone ZOPO SPEED 7-goal, unlike many favorite ASUS ZENFONE 2 signal is almost always maximum. The quality of conversation at a height. Because frequency in the apparatus shown 2G, 3G and 4G LTE, including the most popular Band 7. 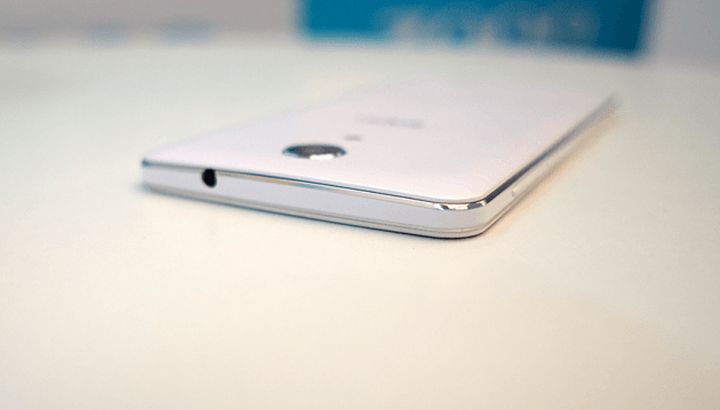 Wi-Fi through one wall and two showed quite a good signal level.

There OTG, Bluetooth 4 and HotKnot (analogue NFC). GPS navigation has the support of satellites GLONASS, which improves positioning. The presence of the electronic compass allows you to use phone ZOPO SPEED 7 as a tourist or led navigator.

The phone ZOPO SPEED 7 is based on Android 5.1 and includes its own envelope, which I recommend changing to Google Home [Play Store].

Support for on-screen and contactless gestures, of which the most convenient – a double tap.

In the settings, you can find a system to improve the sound and the interface HotKnot. 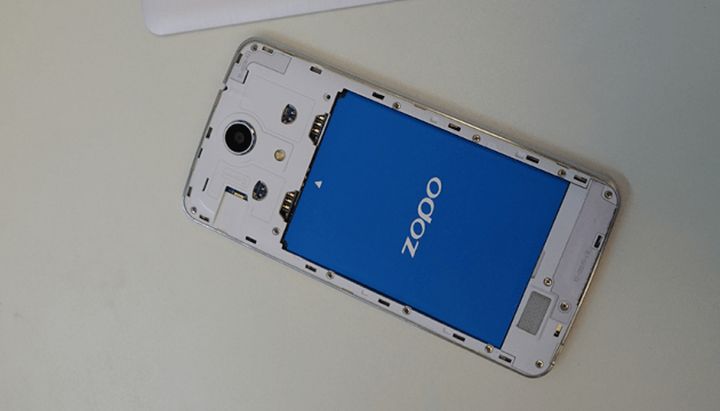 The phone ZOPO SPEED 7 based on 64 bit 8 core CPU MTK MT6753 1.3 GHz with video card Mali T720. RAM in the machine 3 gigabytes, within 16, expandable memory card. The amount of RAM is truly the flagship here and discover the game 2-3 or 7-8 tabs in the browser will not be any problems. Smartphone moderately heated in the chamber. Based on the high-resolution screen, to play modern games will appear mostly at the secondary level graphics – for the high-quality image than what is necessary to pay. Consider the value of CPU-Z:

In phone ZOPO SPEED 7 set the main camera on 13.2 MP and the front 5 MP. All values are given fair and camera without interpolation. The picture quality high enough level to compare images made in different conditions: in the morning, evening, late evening, the sun, close-up and others. In my opinion, the camera coped well on the assessment, and for its price segment, so just perfectly.

The front-facing camera makes it possible to use a smartphone, not only for Skype and self but even to write vlogs – an excellent camera with facial beauty regime. 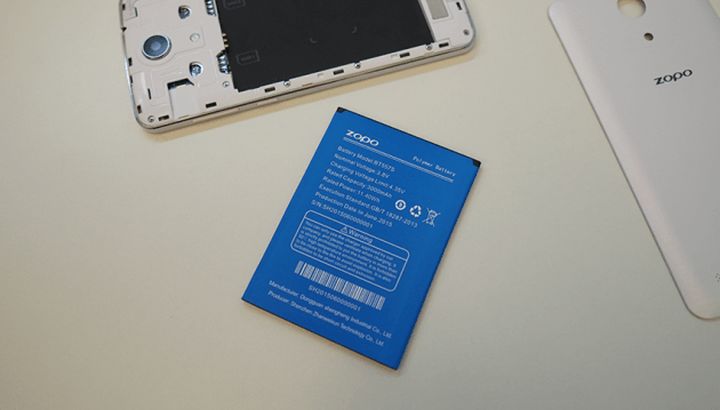 Videos in FullHD written in 3gp format. Below is an example of a roller evening under indoor lighting, the quality is about the same as on my camcorder Sony CX400E.

The device primarily attracts attention with its compact diagonal of 5 inches, excellent screen, GPS, support for 4G LTE, a modern 64-bit 8-core processor as well as the flagship value memory (3 GB). Among the minuses only useless indented bottom of the screen with the logo of phone ZOPO, and additional comments from – the low volume of the main speakers. But this disadvantage can be corrected in the next firmware update.