Ne secret that every manufacturer is trying to give their products the qualities that would have stood out among their competitors. In some, it turns out, while others – not very. Dell brand is considered to be innovative in terms of ideas, and now, apparently, its developers seized “Frameless” fever. More recently, we saw a very interesting product – a laptop Dell XPS 13-9343, and now is the turn of talk about the new Dell Venue 8, which is made in the same style.

Tablet PC Dell Venue 7840, namely an index gained model refers to the second generation tablet Dell Series 7000. By the way, Venue 8 (7840), though a novelty, but has already gained worldwide recognition as a reward CES Innovation Awards. It is awarded for outstanding design, which, according to the judges, compares favorably with other similar devices. At first glance, the tablet is fairly unusual: the screen is surrounded by a very thin frame. However, the most interesting feature of this gadget – it’s his webcam, which is in the device, not two, as we all got used to, but four! Well, high resolution display (2560×1600 pixels) and productive filling does not doubt that this is a device with a claim to leadership. By the way, thanks to this line of tablets, the company received an award for innovative design in its category.

The appearance of the tablet is very attractive and definitely deserves attention. To begin with, in the case that the device does not practically used plastic, most of aluminum. However, Dell Venue 8 (7840) was very easy, just 313 g, and walked in this parameter, even Apple iPad mini, which is heavier on his ’26 Dimensions new items are also encouraging: 216h124h6 mm – excellent performance for an 8-inch form factor. Thus, virtually the entire rear panel is made of aluminum, which looks solid and practical in use, since it does not attract fingerprints. In addition to this factor there are also negative, which is not very good adhesion to the surface of the user’s fingers. Simply put, there is a risk that during the active work on the tablet that just slip out of your hands. The lower part of the plastic cover and very easily soiled, which is located in the center of the eye webcam. Two more, but smaller, the manufacturer put on a thin horizontal box a little higher. 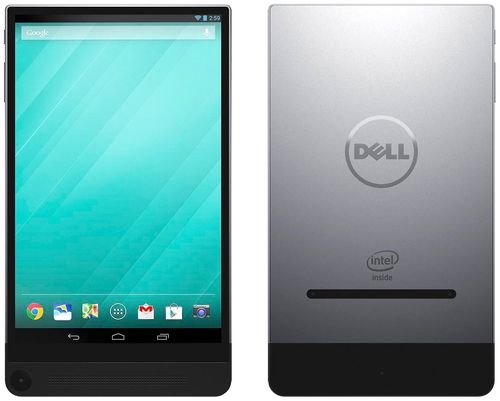 Almost the entire front surface is the display with a thin bezel around the perimeter. The bottom of the front and plastic, in the left corner you can see it has a camera, and next to it – an oblong speaker grille. Interfaces are uniformly distributed over all the faces of the housing, but the top.
Well, it looks like new good, but that’s how convenient? In fact, a more detailed study of this aspect, it is clear that use the tablet in landscape orientation is virtually impossible because of the lack of a frame with one hand. Accordingly, the device can be kept only by the bottom, a plastic insert or grasp forefinger and thumb the edges. But given that the tablet and tries to slip out of hands, holding it in ways becomes potentially dangerous.
In conclusion I would like to say a few words about the build quality: Dell Venue 8 (7840) deserves an “excellent” because it does not bend even under intensive pressing, does not creak and not play.

8.4-inch screen tablet Dell Venue 8 (7840) received permission to 2560×1600 pixels and a pixel density of 359 ppi. The display is protected oleophobic coating due to which not too susceptible to fingerprints. A variation of the matrix rather unusual – AMOLED, and it can be rarely found in today’s mobile devices. Nevertheless, it is unjustly overshadowed because of its obvious advantages. For example, AMOLED-matrix is characterized by excellent contrast, the average level of brightness, wide viewing angles. Indeed, in the model described by the maximum brightness, white subject fills the entire screen of the order of 200 cd / m2.

Contrast is incredibly high, what merit deep black color. By the way, note that moment: AMOLED-screen shows a picture of good quality, but it will be different, for example, from IPS. In the first case, the color is intense and bright, and the second – a more realistic. Both matrices are in demand, and evaluate them according to the criteria of “good / bad” is not entirely correct.
An additional plus of this screen – wide viewing angles, which allow to enjoy the image from any angle. The display provided by the presence of anti-reflective coating, so the weather is sunny, you can not be afraid of the glare. Also worth noting is support for up to 10 simultaneous touches.

Speaker in one gadget and as we have already mentioned, it is located in the lower part of the front of the tablet. In fact, we have the most common sound that is characteristic of the tablet. However, if you wish, you can adjust the sound settings in the application MaxxAudio. As a result of this adjustment program actually significantly improve acoustics and increase the volume. Thus, the sound is more than enough for you to play movies, music and start to include other multimedia files. 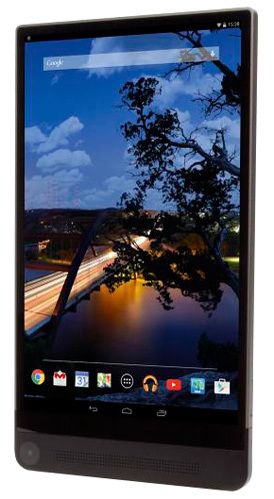 Modern users are already accustomed to the fact that the webcam is just an additional option of any mobile gadget, but the example Venue 8 (7840) Dell engineers decided to demonstrate the gap pattern. So, actually two cameras in tablets, but to the rear “tied” two additional.

Let’s start with the front webcam. Its resolution is 2 megapixel, which is enough for video calling on Skype or other similar programs. The peculiarity of the front web camera lies in its unusual location, namely at the bottom of the panel. The amenities it does not add, quite the contrary, and this arrangement would be long to get used to.
As for the rear webcams, its resolution is 8 megapixels, and pictures for fast more than enough.
But that’s not all: in the Dell Venue 8 (7840) realized an interesting and rather unique feature. Built-in camera Intel RealSense enables 3D-pictures. The essence of the process is to fix the size of the items to be addressed lens and measure the distance between them. In addition, you can add various effects to vary the brightness of the image, change the depth of field after taking a picture. By the way, the size and the distance will be shown only in feet and inches, the other measurement system settings are not provided.

All these features are available through the interaction of all three chambers, because they complement each other. However, the technology is relatively new, so the thought is not yet fully hence its implementation is not without errors. For example, there may be errors in the measurement, in particular, if pictures in a dimly lit room. It is also a problem if the object is very small or if it is too close to the camera. In short, the idea is interesting and neizbity, but still a little buggy.

The physical keyboard in our modification there, but there is virtual. Those who have been exposed to Android, is nothing new for themselves will not open. On the other hand, users who have not been holding a gadget with the OSes, not be difficult to deal with the keyboard, before it is simple and straightforward. I am glad that at any time you can change the language layout, choose between letters and numbers, etc.

However, at the manufacturer’s site provides a complete set, which includes the wireless keyboard. It is quite comfortable, except for the absence of the touchpad. In addition to its direct function, the keyboard is also a cover that protects the body tablet from possible mechanical damage. The lack of physical buttons is not surprising, given the desire of engineers to make a display frame as thin as possible, instead of them there are three virtual “Back”, “Home”, “Menu”. 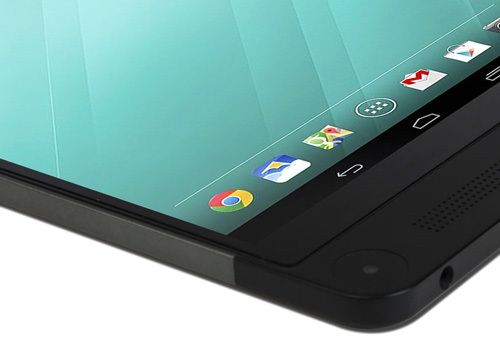 As mentioned above, Dell Venue 8 (7840) operates on the basis of the operating system Android 4.4 KitKat. As usual, this OS users indulge abundance of various software.
Go directly to the stuffing. Quad-core Intel Atom Z3580 Moorefield generation running at 2330 MHz, is built on the architecture of Silvermont and executed on 22 nm process technology. Graphic data processing is assigned to the graphics card PowerVR G6430 with an operating frequency up to 533 MHz. Accelerator delivers excellent results and can be operated to perform quite productive tasks. It is made of 28-nm process technology, supports OpenGL 4.0 and DirectX 10. With this stuffing on the plate can be successfully run such toys as Asphalt 8, Modern Combat 5, World of Tanks, etc.

The amount of RAM is 2 GB of standard DDR3, and built-in – 16 GB of which is available to about 9 GB. Furthermore, there is a card reader built by which the volume can be increased up to 512 GB.

It would be surprising if such a tablet with excellent characteristics disappoint in terms of interfaces. On its left side you can see two physical buttons oblong: on and volume rocker. In addition, a number of them still fit and built-in microphone.
The right edge of the manufacturer has supplied a card reader 3-in-1 (SD / SDHC / SDXC) withdrawable type.

Below there is a port Micro-USB 2.0 connector and combined. At the top there is nothing.

Also, the device provides wireless communications presented dual-band Wi-Fi 802.11 b / g / n / ac and Bluetooth 4.0, and navigation in the form of GPS and GLONASS. 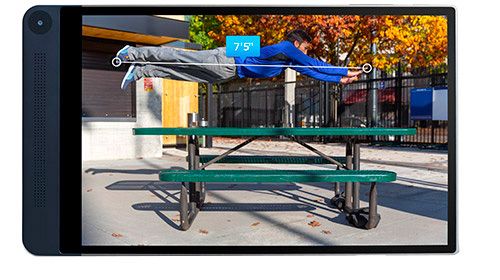 The Dell Venue 8 (7840) set the battery capacity of 5900 mAh, which demonstrates a very good result. So, if you play good quality video in online, your battery runs for about 13 hours. However, while the Tablet PC at startup toys as well – about 5-6 hours. Approximately the same performance and demonstrates “the younger» iPad. Thus, the gadget can easily take on the road or on vacation, and not to worry, that he suddenly turned off at the most inopportune moment.

Dell Venue 8 (7840) – no ordinary tablet. The device is intriguing with its appearance: its display no frame, so it seems that it is much more than the stated 8 inches. In addition, immediately catches the eye is that webcams are not two, as usual, and as many as four. I am glad also that aluminum is involved in the design, and the gadget is slim and lightweight. In addition, the display has received good news matrix with high resolution, excellent color, brightness and contrast. Also, the tablet can boast of its performance, thanks to a new generation of processors Intel Moorefield. 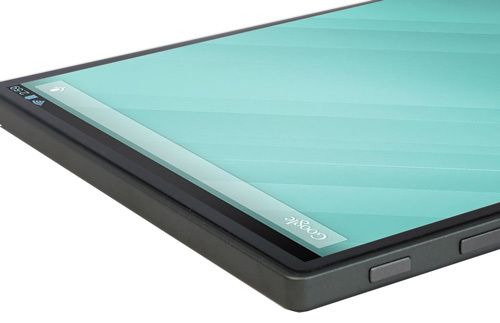 Disadvantages are also available, although they are not significant. The biggest disappointment – a camera, which, according to the positioning of the tablet, on the contrary had to be his highlight. In fact, the technology Intel RealSense was not fully thought out, and the photos are some errors. Perhaps, in its subsequent models and Dell engineers will bring this piece to perfection, but, so far, this is not something for which I would like to pay $ 400.