Earlier it was reported about the incredible achievements of scientists: the possibility of a human head transplant, as well as technology transfer sound to bypass the ear. Moreover, three years later, scientists began testing the bionic heart in humans, and now thanks to the implant in the brain can be controlled robotic arm and drink beer or even buy a bionic arm for $ 300 that can replace the human. However, a person does not always need to replace a particular part of the body, sometimes you just need to bring her the strength that decided to make scientists presented a unique glove that can help the muscles in their work.

Experts from Harvard University have demonstrated a prototype glove that is designed to help people with muscle weakness and degeneration of the brush. The high-tech device contains bubbles on each finger, which are filled with water, thereby greatly enhancing grip. The prototype responds to voice commands like, and the trigger switch. 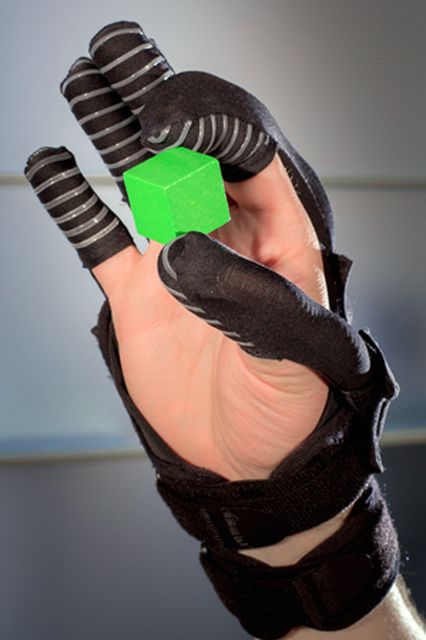 Current model can help to fulfill one single movement, as in fact the water passes through a predetermined route and unable to dynamically change its position, but scientists are already working hard to make a difference. Another disadvantage in favor of its weight equal to 3.6 kg, which is clearly too much for people who have muscles can not work properly on their own.

Scientists believe that in three years will bring the technology to the mind, in particular, significantly reduce its weight. Another idea to improve the technology serves to create a more intuitive control – scientists want to learn to respond to the glove muscle contraction, thereby making it more intuitive for the user.

However, the potential for the development of much more than simply as a means of helping patients. In the future, this technique using other materials could have a far greater impact on the health of people, giving them enormous power. In particular, it will significantly increase the effectiveness of the rescue services in the devastated areas, particularly in the analysis of debris of houses after earthquakes.