Although the technology of adaptive change the screen refresh rate NVIDIA G-Sync already announced some time ago, has so far been represented only about a dozen models of monitors with its support. One of them is the current version of our guests – a 24-inch monitor AOC G2460PG.

The monitor AOC G2460PG is made in a simple, understated design more suitable for office model than a game. However, thanks to the use of delicate green color (brand for the company NVIDIA) This monitor is still perceived as a gamer. 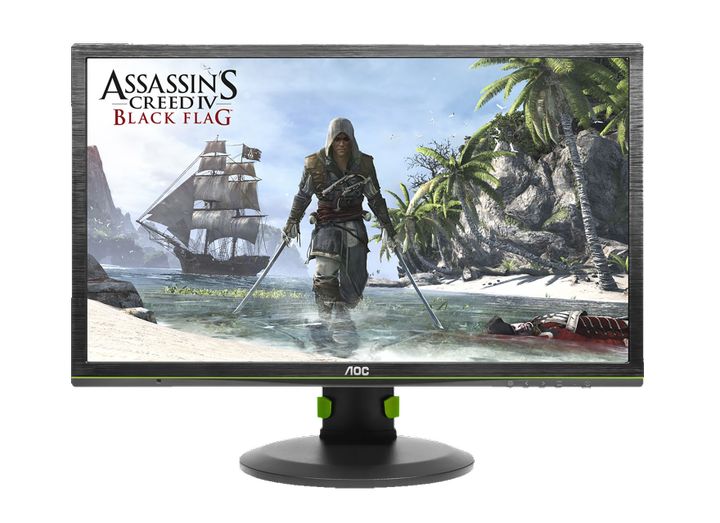 The frame around the screen average – 1.5 cm on the sides and top and 2.5 cm – below. Stand unusual “thick” and, like some monitors ASUS, the upper part of it also rotates when you turn the screen around a vertical axis.

It is necessary to monitor completely stable, you can move it, but you have to make some effort. Leg allows you to adjust the display position adjustment, change the angle of it and transfer the screen in portrait mode. In the lower part of the bracket is mounted removable, designed for laying cables connected to the monitor (if it is pale green user does not like it, the bracket can be easily removed).

Traditionally, support for monitors with NVIDIA G-Sync, here there is only one video input – DisplayPort. Next to it is also USB-hub with two ports USB 3.0, in addition, on the side face can be detected 2 ports USB 2.0, one of which can charge the connected devices even if the monitor is in standby mode.

To control monitor AOC G2460PG uses hardware buttons located on the bottom right. On the front panel in front of them marked relief symbols, however, see them problematic – under normal conditions, even under moderate office lighting, they are practically indistinguishable.

Menu monitor AOC G2460PG looks unusually frank – because almost no graphical interface at first difficult to understand its organization. In total, there are 4 main partition headers are located on the right side of the menu.

In the “Brightness” you can adjust the brightness, contrast, select one of three preset modes to adjust the scale and degree of overdrive. In the “Color Settings” you can select the color mode (Warm, Cold, Normal, sRGB, and User – in the latter case, the individual adjustment are available for each of the three primary colors). In the “Settings menu”, the user can change its position on the screen, the display time and the degree of transparency in the “Advanced settings” is available including proprietary features NVIDIA – ULMB, and reset to factory defaults (which is the Russian version of the menu for some reason, was signed by the Finnish word Nollaus).

The aspect ratio of the monitor is standard, 16: 9, resolution – 1920×1080 pixels, perhaps the most popular among the players. Of course, you can complain that a sharp eye at FullHD on a diagonal can see the individual pixels, but a higher resolution would inevitably lead to an increase in system requirements in modern three-dimensional games, and hence the need for better PC performance.

Response time at the monitor AOC G2460PG – the standard for a gaming monitor, 1 ms. In his settings, it is possible to activate the overdrive – without small loops of moving objects nevertheless are still visible. With increasing degree of dispersal trains almost completely disappear, but at the maximum value appear distinct overdrive artifacts in the form of luminous halos behind moving objects. In this regard, we would recommend using either a light or average acceleration. 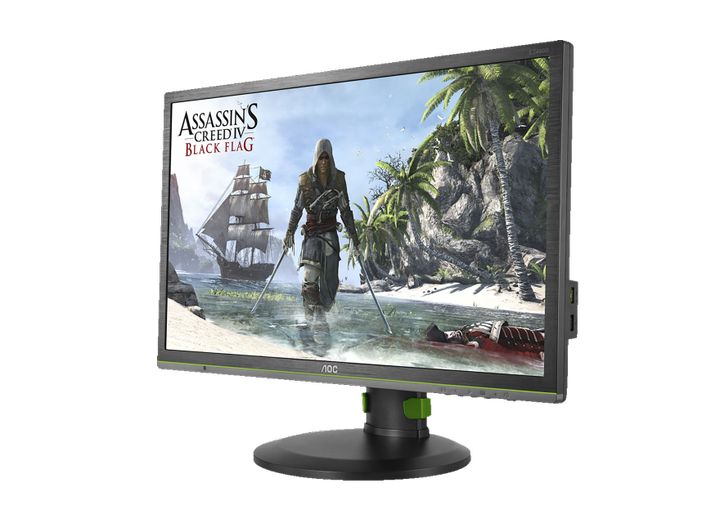 It uses the classic matte finish screen that eliminates the appearance of parasitic glare and reflections, but results in a crystalline light effect (looks like an inconspicuous “ripple” pixels on the plain areas of the image). In the close-up shot is considerably very good, but for the “naked eye” effect looks, of course, is much more modest.

As mentioned above, monitor AOC G2460PG review – one of the few monitors with support for adaptive refresh rate NVIDIA G-Sync. Recall that support this technology, the monitor is equipped with a special module production NVIDIA, which causes the monitor to update the screen at the same time coming from the graphics card new frame (or, in other words, the card flexibly manages the refresh rate, “adjusting” it under the current frame second). This technology allows to obtain the maximum performance in the game, and thus eliminates the possibility of delay input (which is typical when using software vertical synchronization Vsync). Compared to competing technologies – AMD FreeSync, at NVIDIA G-Sync has quite a serious deficiency in the form of a hardware module that increases the cost of the monitor (FreeSync is an optional extension of the standard DisplayPort 1.2a and no hardware “add-ons” from the producers of the monitor does not require) – this is why reality displays supporting G-Sync several times smaller than with support from AMD. However, the advantages of the G-Sync also has – it has support for all video cards NVIDIA, starting with the GeForce GTX 650Ti BOOST (FreeSync supported by a relatively small number of graphics cards and APU from AMD). 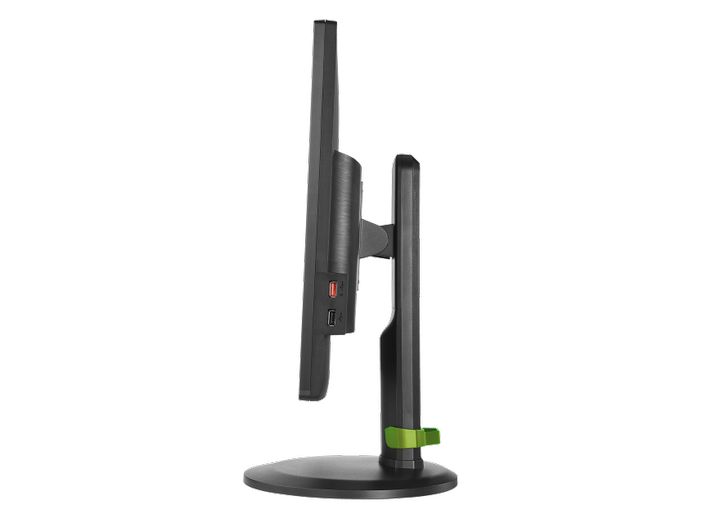 In addition to G-Sync, there is another technology designed for players – ULMB (Ultra Low Motion Blur). It allows you to further reduce the plumes of moving objects, which is achieved by turning on / off the backlight. This significantly reduces the brightness, and the image itself, quite expectedly, flashes that immediately experience users with sensitive eyes. ULMB can not work simultaneously with G-Sync and available at frequencies of 85-120 Hz – so that, in our opinion, is to keep this option turned off, and if you ever want to get rid of loops, it is best to include overdrive.

The leak backlight is almost invisible, but on a black background at maximum brightness becomes distinguishable small bright spot in the center.

Glow effect is virtually non-existent when viewed at different angles appears very faint brown sheen, which is an order of magnitude smaller than the typical glow at the IPS-panel. 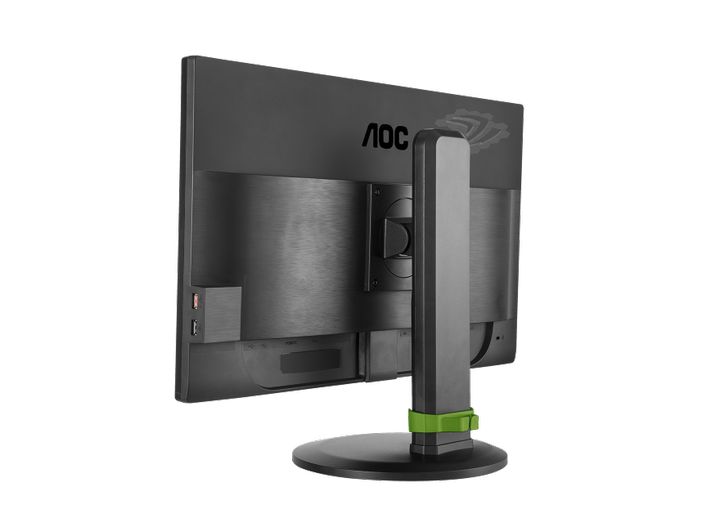 If we talk about the viewing angles, then the model they are pretty good, both for the TN-matrix – in the plan monitor AOC G2460PG looks better “average T”, to which users are accustomed. Thus, when viewed from the side there is a moderate decrease in the brightness and contrast of the image appear warmer and brownish tinge in dark areas, but any significant distortion of color here is not observed. Seen from above, the brightness is almost reduced, the image fades in bright areas of missing parts, but pure colors do not change visually. Worst of all, to be expected, the image looks when viewed from below – with an increase in the viewing angle quickly darkens the picture first, almost to black, then the brightness of the back, but the distortion of color is very strong, up to invert individual colors. However, this is the typical behavior of TN-matrices with which nothing can be done, moreover, at an angle on a desktop monitor (as opposed to the laptop screen) look likely, no one will. The only thing noticeably affect small vertical viewing angles – two different shades at the top and bottom of the screen; so that the derivation of white on the entire screen becomes clearly seen that the top color is lukewarm, and bottom – on the contrary, coldish.

What is the main difference TN-matrix?

To adjust the brightness, apparently, in this model is not used PWM (or flicker frequency so high that define it “by eye” is not possible). The minimum brightness level was at 23 cd / m² – this is a very low figure for a monitor AOC G2460PG, with a brightness of this monitor, you can work comfortably even in complete darkness. Maximum brightness (average of measurements at 25 points) was 270 cd / m², and the difference between the brightest portion (center) and the least bright (top left corner) was at the level of 40 cd / m², which is quite a bit, especially for This type of illumination, and the positioning of the monitor. 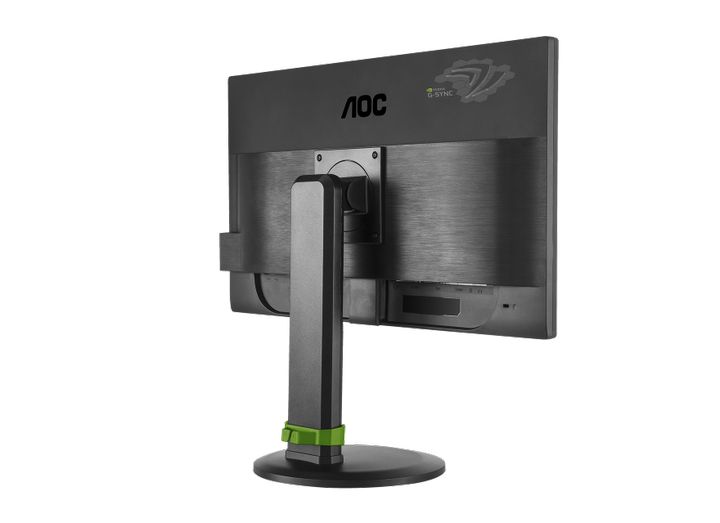 SRGB mode disables all image adjustment (excluding overdrive). The value ranges significantly overstated, to 2.4 (compared with the standard 2.2) – it makes the picture more intense, due to the loss of detail in the mid-tones; color temperature slightly understated color coverage was 100% sRGB and 78.8% Adobe RGB. Color accuracy is low, however, to monitor the game – more than enough.

Mode “Warm” demonstrates many of the same results, but it is available all the adjustments – so that is what we would recommend to use (for example, switching range in the monitor settings in the “Mode 2”, its average starts from the default – the truth, the nature of the curve remains the same, with a minimum in the dark areas and the maximum – in light).

The monitor AOC G2460PG – not just a rare representative of gaming monitors with support for NVIDIA G-Sync, but he is also one of the most affordable in the category. Where to buy AOC G2460PG? You can click on the link below. This is achieved mainly through the use of 24-inch monitor AOC G2460PG matrix with a resolution FullHD (against 27 inches and WQHD the more expensive competitors) – the quality of the image (with an eye to the TN-matrix) remains high. Among other advantages should note the presence of USB-hub with two ports USB 3.0, and USB-port for charging mobile devices. Among the shortcomings – perhaps only for traditional monitors with G-Sync that only one video input (DisplayPort) but the lack of built-in speakers.

+ NVIDIA G-Sync
+ Good workmanship and decent, for TN-matrix image quality
+ Relatively low compared to other monitors with support for G-Sync, the cost

– Special shortcomings have been identified