The release of the third-generation processors Intel Core Ivy Bridge followed, of course, update, if not all, then most of the actual lines of portable (and not only) computers. Naturally, this fate befell monoblock Eee Top Company ASUS, and today we take a look at 24-inch ASUS Eee Top ET2411on the new platform. Let me remind you, earlier this year we have already had the opportunity to test the high-end model ET2700 and tell you about the results. These devices are very similar, so I will focus on the distinctive features of the updated model.

Updating not affected the appearance of the candy bars, and they look just as stylish and monolithic, causing a sense of confidence and reliability. The ASUS Eee Top ET2411 display is framed by a black frame with a glossy finish. Slightly below-series decorative mesh that hides the dynamics of the sound system. The whole structure is placed on a strong metal “paw”, firmly holding a candy bar and allows you to adjust the angle. 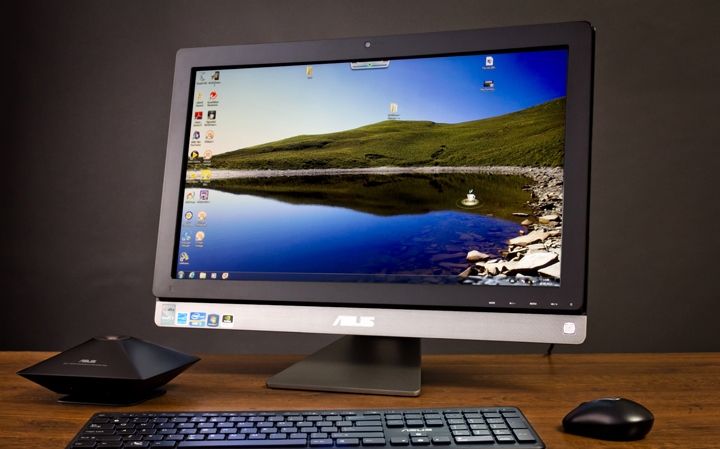 Places on the table ASUS Eee Top ET2411 does not take more than the usual 24-inch monitor, and even less if you hang it on the wall with brackets VESA. Body thickness of only 60 mm.

As you can guess, it was the cause of the filling device updates. Monoblocks ET2411 based on the latest generation of processors Intel Core Ivy Bridge, a graphics subsystem has been replaced with new discrete GPUs NVIDIA GeForce GT 630M. 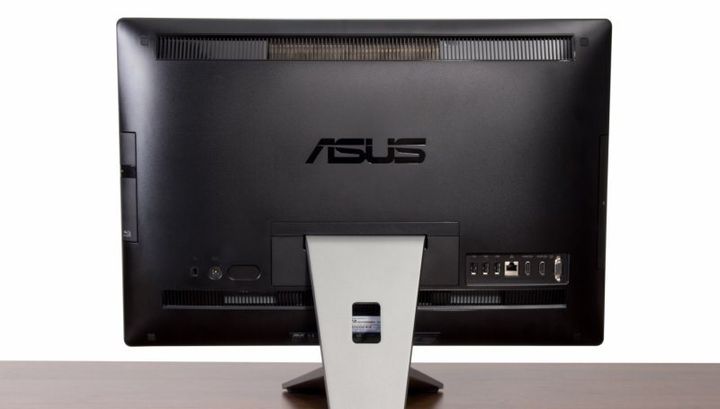 The manufacturer has provided perhaps all options, leaving four versions ASUS Eee Top ET2411 – INTI, INKI, IUTI, IUKI. The differences lie in the presence of a touch screen and discrete graphics. All are built processors Intel Core i7-3770S (8 MB of Level 3 cache, 3.4-3.9 GHz) and i5-3450 (6 MB Level 3 cache, 3.1-3.5 GHz), can be equipped with up to 8 GB of RAM (two slots available in the SO-DIMM) and hard disk capacity from 500 GB to 2 TB. Optionally, you can also get an external subwoofer, in addition to the standard sound system. 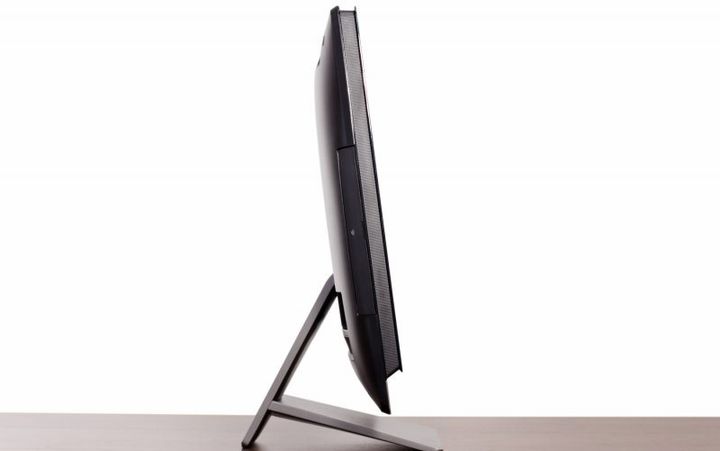 Ivy Bridge processors are an improved version of the microarchitecture Sandy Bridge. They are made under the 22-nm process using three-dimensional transistor Tri-Gate. In addition, these processors include support for USB 3.0, DDR3-1600 memory controller and PCI Express 3.0. Increased performance of the integrated graphics core and the overall performance of the processor (20%) while reducing its energy consumption (20%).

There is support for technologies such as Intel Turbo Boost 2.0, Intel Quick Sync (video encoding) and LucidLogix Virtu MVP allows the use of integrated graphics core (if available) to speed up the primary video card than increasing performance by 60%, and a three-fold increase in the speed of video conversion. 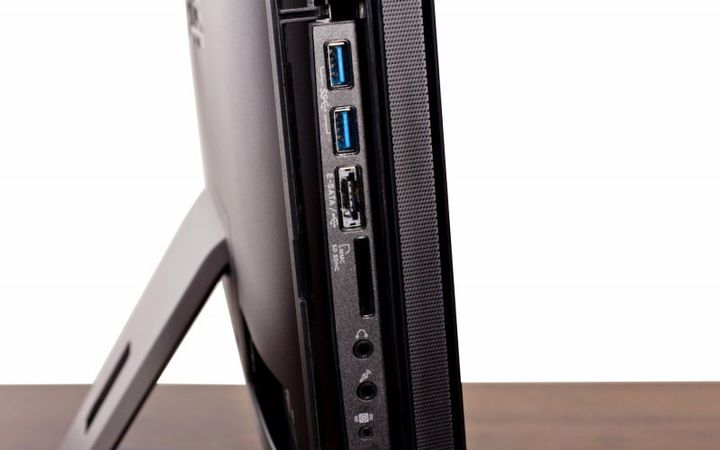 Unfortunately, to demonstrate the performance of the GPU 2500 Intel HD Graphics \ 4000 we can not – in a test model provided it is disabled, and all work on graphics processing performs a discrete graphics card.

A set of interfaces is extensive and consists of a 5-port USB 3.0, combo connector eSATA / USB 2.0, HDMI-in, HDMI-out, D-Sub, 2 audio connectors, subwoofer connector and card reader. Problems connecting any external equipment had not arisen. Rounding out the picture of the Blu-ray drive and a wireless module Wi-Fi 802.11 b / g / n.

The model ASUS Eee Top ET2411 used a qualitative matrix with a diagonal of 23.6″ and a resolution of 1920×1080 pixels. The display has a very good factory settings and provides excellent color reproduction and saturation. However, the matrix in this model is made by technology TN (unlike MVA, established in ET2700), which affects the viewing angles – they are not so good, but nevertheless large enough to provide a comfortable viewing movies in a small company.

The brightness level ASUS Eee Top ET2411 varies from 100 to 210 cd / m2, a contrast of 540: 1. There is support for multitouch. The sensor operates responsive and generally satisfactory, but I remain of the opinion that Windows 7 is ill-suited for use with touch screen of this size, and crawl on his hands rather large display – a dubious pleasure. Although, for the sake of entertainment evil birds or draw in ASUS Paint can with great pleasure. 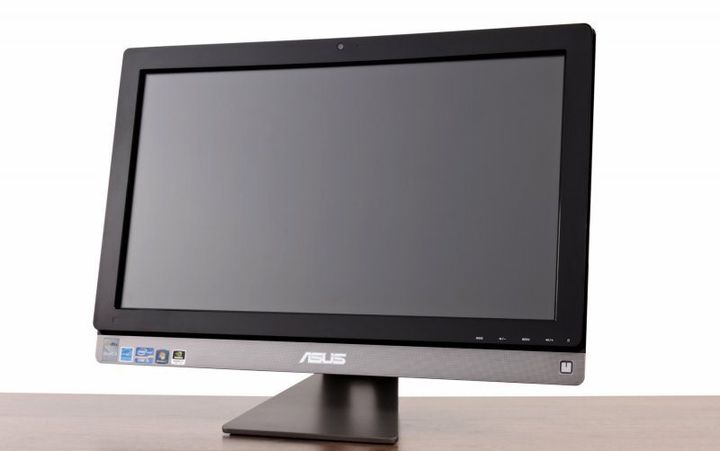 The audio system ASUS Eee Top ET2411 has become even better thanks to the support of technology SonicMaster and DTS Surround Sensation UltraPC II. The first involves the use of hardware and software to improve the quality of sound, and the second makes it big. In addition, the supplied (in some models) external subwoofer offers an excellent bass response. The whole system is great and leaves a positive impression. Its sound will appreciate even seasoned music, lovers.

So, what do we test Semple: Junior processor Intel Core i5-3450, 6GB of RAM, hard disk capacity of 1 TB and discrete graphics NVIDIA GeForce GT 630M with 1 GB of video memory?

Compare the performance ASUS Eee Top ET2411 of this system i5-3450 on the previous device on i7-2600S is not entirely correct, but even with such a difference in the classroom increase in power of the latest generation of processors visible to the naked eye.

Discrete graphics adapter NVIDIA GeForce GT 630M, shown in this model ASUS Eee Top ET2411, is based on the core GF108 and is nothing more than a renamed version of the GT 540M. It is worth noting that this is not the only modification of the card – there are also versions cores GF106 / GF116 (renamed GT 550M), as well as the model with the core GF117 on 28nanometrovoy architecture Fermi, which significantly reduced power consumption. Whatever it was, it is quite fast mobile graphics card, which provides not only playing and converting videos, but also a comfortable FPS at most of the “heavy” games.

The new generation monoblock ASUS Eee Top ET2411 and keep a solid appearance, enriched with the internally. Having adopted the latest generation of processors Intel Core Ivy Bridge, the devices are ready to conquer new heights – faster graphics processing, powerful games, and so on. 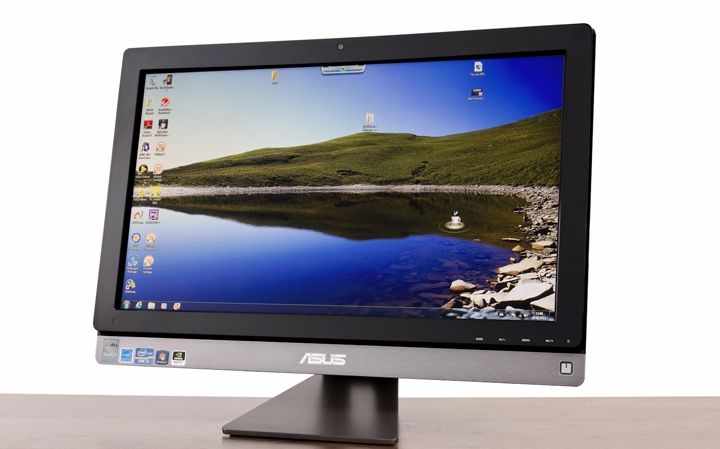 This is a true home entertainment center and models without a touchscreen and / or discrete graphics will go well for the working machine, stylish and modern, one that will talk about the high status of its owner.