The new music MP3 player iRiver Astell & Kern AK120 II 128GB capacity of a signal path and refers to audio category Mastering Quality Sound (MQS). In the apparatus are metal casing, strict design and touchscreen AMOLED display with a diagonal of 3.3 inches. Dual DAC CS4398 built on a balanced pattern, which has virtually eliminated distortion and noise, and high output. The player has its own built-in Flash memory capacity of 128 GB, which can be doubled with the help of a removable microSD card of the same volume. 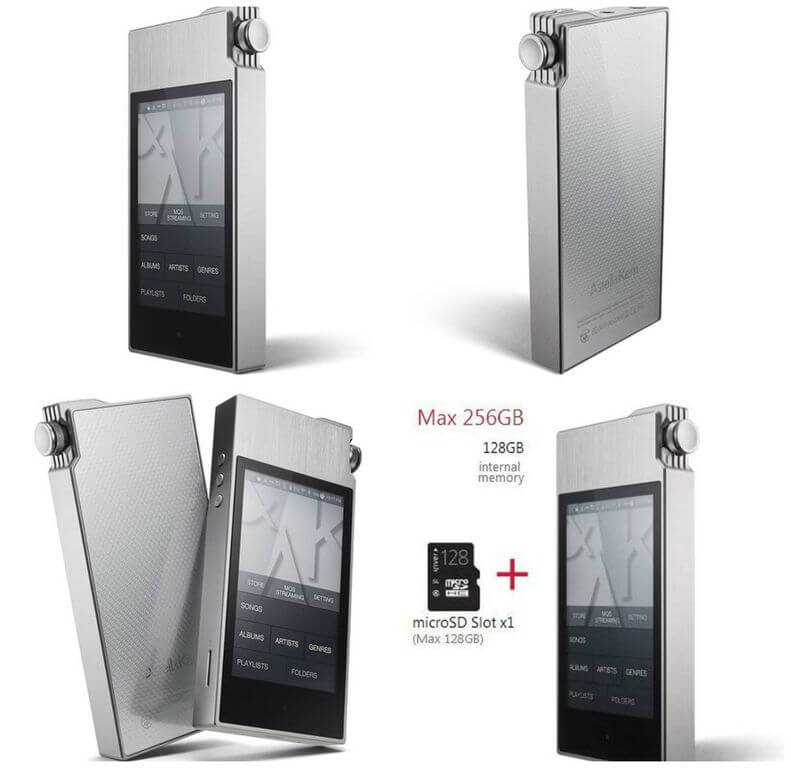 The music MP3 player iRiver Astell & Kern AK120 II 128GB lets you play digital stream DSD 5,6 MHz convertible into PCM at a sampling rate of 176 kHz and treated with a special dual-core processor. Fine-tuning is performed using the key of the song to use the 10-band equalizer with 0.5 dB steps. The device can also be used as an external USB sound card DAC for computers, or for transmission to a Bluetooth signal.

Due to firmware MQS Streaming Sever PC player enables streaming music content via the supported Wi-Fi-connection. In the same wirelessly, using a proprietary OTA (Over the Air), there is an automatic firmware update. The player is equipped with high current audio output to connect the headphones to him with any standard impedance. In the apparatus there is a normal headphone output, combined with optical output for connecting an external DAC, as well as 4-pin balanced connector 2.5 mm mini-jack.

Astell & Kern AK100 II after another announced a super second generation Music MP3 player iRiver Astell & Kern AK120 II 128GB. The reason for the release of this player is the same – the need to improve some parameters to improve sound quality on the basis of no technological calculations and personal experience and the experience of many users. 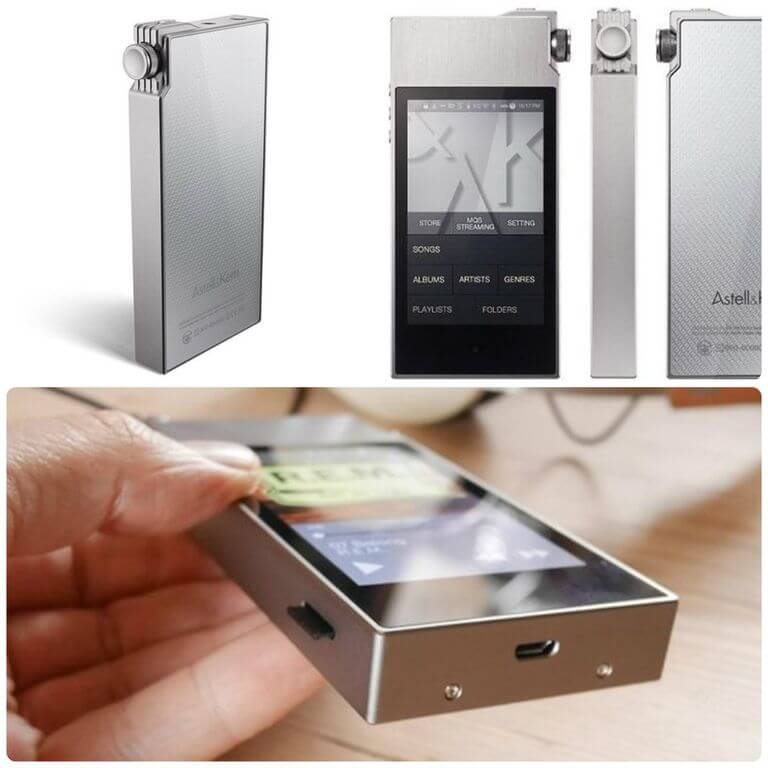 For example, the flagship model has proved the effectiveness of using the balanced output. This has resulted in a strikingly deep and sound quality. The sound became more melodic and pleasant. For the DAC-chip CS4398, A amplifier has been reconfigured. A dual-core processor has enabled AK120 II DSD play with the parameters of 5.6 MHz (and conversion to 176 kHz PCM). Find out where to take the music in studio quality.

If you want to use this device as an external DAC / soundcard, just connect it to your Mac or PC via USB-access available. You do not like to use when connecting the wires? You will be Wi-Fi-connection. Installed on AK120 2nd generation (MQS Streaming Server) allows downloading music and listening to it wirelessly. Also, using Wi-Fi-connection, the device will automatically check the manufacturer’s website presence of the next version of firmware for the device.

The screen model music MP3 player iRiver Astell & Kern AK120 II 128GB – 2nd generation increased to 3.31″ in comparison with AK120. This allows the screen to display more information, make the management more convenient. Even the album appears on the screen 6, instead of 4, as it was before. Also, the name of the tracks displayed in two rows of steel. It is easier to navigate. These same characteristics have and model AK100 II. 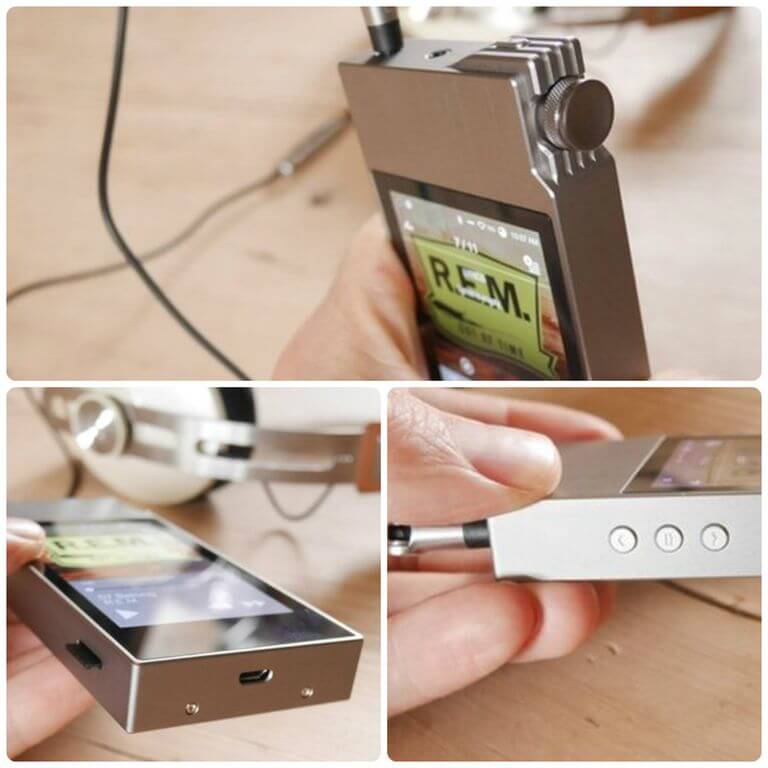 The changes were made and the equalizer. With the 5 the number of lanes has grown to 10. Step halved from 1 dB to 0.5 dB. In addition, the device is able to support custom EQ settings for different genres.

The memory capacity of 128 GB is possible to extend up to 256 GB. Card slot one, so that its volume cannot exceed 128 GB. But this is a solid amount!

Engineers have been completely revised form factor, PCB layout, materials, and processes. And all of this is aimed at achieving the perfect harmony of design and technological capabilities.

Volume control was moved and is now located just above the spinning and convenient. 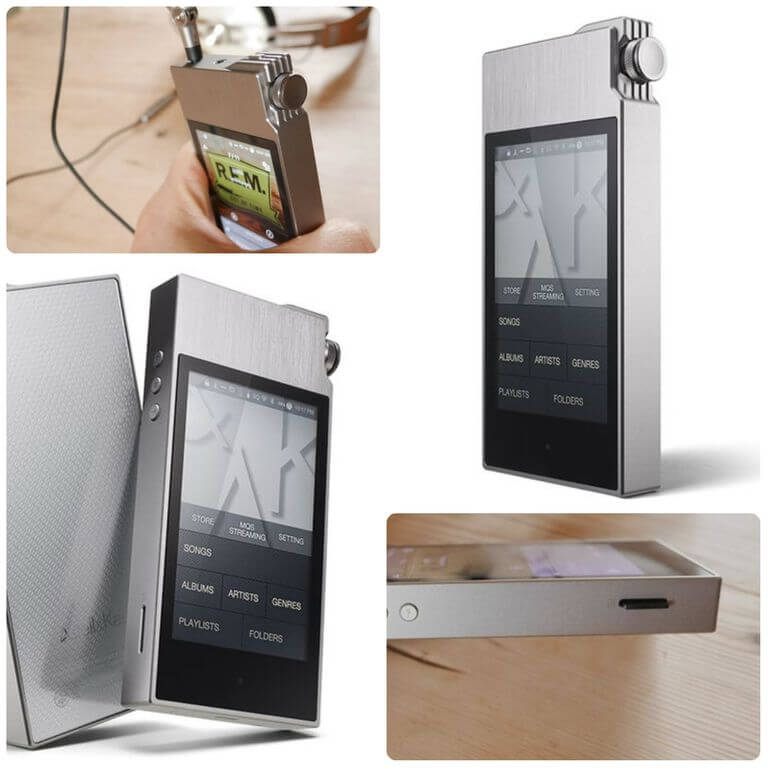 The body is a delight! Faceted, the luxury aluminum casing has an outstanding individual layer of the tread, and three thin parallel lines should cause association with the stringed instrument. In this model, unlike AK100 II, on the rear panel, you can see the A logo, forming a 4-pointed star, folding into a braided pattern.