Most cyclists know how dangerous it is to drive on the roads during the most active hours in terms of vehicular traffic: some prune, the kiss someone to the curb, someone does not notice. Solid discrimination. In Europe, by the way, also has its problems, but they are much smaller.

Decadent West is constantly worried about the safety of its citizens, and recently one of the companies to focus their resources on the problem of looking back to check for cars in the vicinity. Turn his head all the time – not an option, because literally every second road on the weight of life, not even gold. Mirror on the steering wheel, too, will not be a panacea, as it is sometimes very uncomfortable, and if suddenly breaks along the way, what to do next? But the electronic system for transmitting pictures to the area behind the steering wheel may seem a good solution. 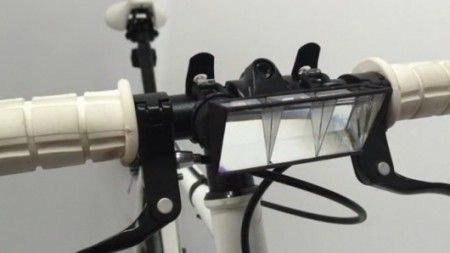 Designed by Brooklyn native Mike Lane machine is mainly installed on the steering wheel bicycle periscope. The idea here is that when the cyclists begin to experience discomfort from the turning back of the neck, they can reduce such stress include Pedi-Scope. Neck can relax and informative and safety will not be affected. Thus, the device can work for some time and during the trip.

The author suggests that Pedi-Scope could be used in urban areas, and long journeys, despite the fact that the benefits of using this stuff in a busy urban environment seems a bit … doubtful. To travel on the highway when the car is approaching rapidly and sometimes suddenly – the most it. And the price is acceptable – only 39 bucks.