In difficult for the “iron” of the market, manufacturers vying to produce the budget version and hold shares in conjunction with each other. All in the struggle for the buyer, for his purse and place on the counter. But whether all this dirty trick, if the quality does not suffer from the decrease in prices?

Here, for example, SSD. Goods both popular and expensive, especially after the price indexation in line with the dollar. Fast drives with SATA III interface and the most popular volume of 240-256 GB worth more than 160 US Dollar, the price of PCI Express solutions even higher.

And then on the shelves appears OCZ Trion 100. Less than 95 US Dollar for 240 gigabytes large variety of capacities (from 120 to 960 GB). Reputation from OCZ Trion 100 is twofold; there were good models (Vertex 2, for example), and frankly failing due to design flaws (Vertex 4). And then completely exit from the market. In general, OCZ Trion 100 – from all sides interesting product. 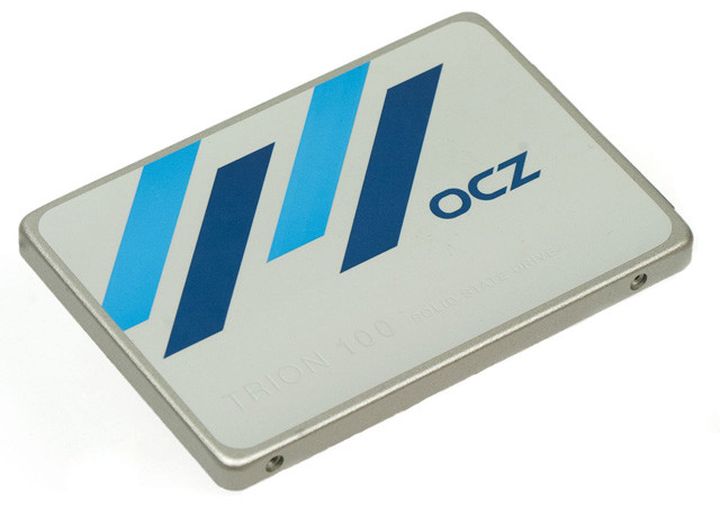 Outside the standard, equipment is very austere, no-frills package. Economy emanates from all sides: from external mechanical influences protect paperboard yes PET-box, in the appendage does not even put the bolts and the housing is assembled on saving for screwless mounting.

Given the target audience, such decisions are justified neither screws nor the wealth of the box or casing design to performance and durability did not affect, and can raise the price considerably. The most interesting inside, between the aluminum shell halves.

Short circuit board, on which the wired controller, four memory chips TLC cache of 256 MB.

It is strange that the body was not shortened in accordance with the size of the PCB, and the whole thickness is 7 mm through the thickest place – connector.

First drew the attention of the controller, since it is from it depends largely on the speed of the drive. The big square chip is marked as Toshiba TC58NC1000GSB-00, but any reliable information on it could not be found.

The appearance of fillings labeled Toshiba is not by chance – this is the company absorbed a moribund OCZ Trion 100 and is now regaining its dividends, the output with the label hyped brand. The search for information issued by the AS SSD Benchmark showed that the controller Toshiba somehow very similar firmware Phison PS3110-S10, used in other brands solid-state storage. And pictures like PCBs …

Four memory chips, everything labeled as Toshiba TC58TEG9UDKBADE, the total volume of 256 GB. In fact the same, believing in the right gigabytes, 223 GB user available for data recording. The rest – the cost of a small reserve of strength (but still not enough to drive with TLC FLASH) and marketing (rounded) gigabytes. 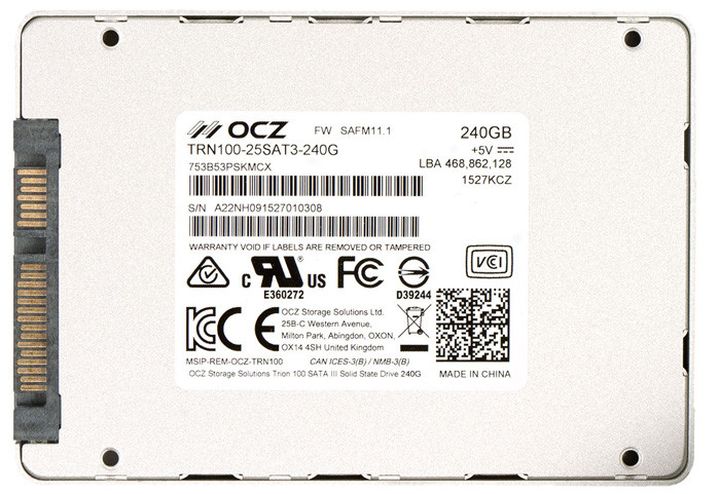 Performance was measured by the drive after several cycles of complete filling, in order to demonstrate the characteristics of fresh inflated OCZ Trion 100 SSD does not lead to the emergence of the question “why is my OCZ Trion 100 shows the figures less than given in the review?”. For the same reasons (to assess the net parameters) drive parameters were taken from the disabled indexing and defragmenting, and the OCZ Trion 100 SSD was not involved as a system disk. Before running the benchmarks, it is tested as a system drive on a computer game in order to independently assess the performance of SSD. As an individual review, not a comparative test of several models, the results are just the individual, issued test programs and utilities for Trion 100 240 GB.

The figures showed Crystal Disk Mark, look very optimistic for a budget OCZ Trion 100 SSD: high speed streaming read / write, and only small blocks there is a serious drawdown speed. But it is normal.

Charts issued AIDA64 Disk Benchmark, in the majority of the second result Crystal Disk Mark, but one – random write – interesting variability of parameters: the average speed of just over 100 MB / s periodically appearing peaks of more than 400 MB / s and sequential start-up test, they appear in different parts of the graphics in different amounts.

Additional tests showed that the recording speed is highly dependent on the volume of data to be written, and the origin of the peaks is simple: a small portion of memory (which is Flash, but not the cache) works in SLC mode, as a buffer for the rest of the hard disk capacity. The relatively small (relative to the total amount of the accelerator) the buffer is filled quickly, and the speed is greatly reduced.

According to the information received, the buffer size is small and estimated units of gigabytes. Could you do more? Yes, but at the expense of the total volume and price.

The real work OCZ Trion 100 showed himself worthy: a subjective difference between the expensive OCZ Trion 100 SSD premium and novelty from OCZ Trion 100 noticeable, but not critical. In turn, the increase in speed on the hard disk (WD black) is felt at all stages, from the boot and ending with gaming applications. 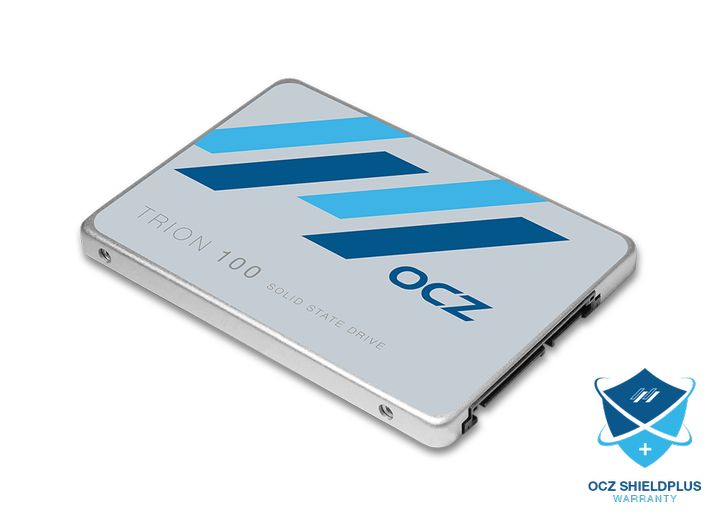 Throughout the benchmark heating controller and memory chips had a minor, the maximum rate fixed in the open position of 34 degrees, in the case of the controller body was heated to 41 degrees, it is safe to operate.

In conclusion, it should be commended for the good Toshiba firmware adaptation to modern needs and pleasant pricing. The users can also easily recommend OCZ Trion 100 review as fiscal replace the system hard drive, especially in laptops because of the small size and heating. You can buy OCZ Trion 100 SSD for But when choosing the operating system should not forget the support teams TRIM, without which the life of the drive is much shorter than we would like.