Summer on the nose, and with it the beaches. This means that it is time to give your body in order and move away from massonabornogo winter. To do this, start to run, swim, join the gym, and so on. D. Listening to music during exercise always adds an incentive and inspiration, but ordinary headphones to deal with it is not always. For these purposes, Sony in early 2015 released a waterproof MP3-player NWZ-WS613 with the function of Bluetooth-headset. Well, go in for sports?

It comes with two sets of player embouchure, one of which is designed for underwater use, the charger, the original remote control, holder, adjustable headband and documentation.

WS613 cvoim view similar to the stereo of Bluetooth-headset with fastening on the neck, such as the Plantronics BackBeat FIT . The shape is enhanced in-ear monitor, combined with silicone occipital arc.

The editorial came a model yellow-gray color, but sales also have black, white and blue variations. The structure is made entirely of plastic, and the arc of silicone. Can not find fault with the assembly, all the collected good.

After matching the ear cushions of which included 4 pairs (conventional and water), and fixing BTE easy to forget that on the ears is any design. Weight player ’37 Given that no wires pulled the headphones down, it is almost imperceptible.

As while walking, and during training in the gym and jogging in the forest could not find flaws in ergonomics, traffic free. 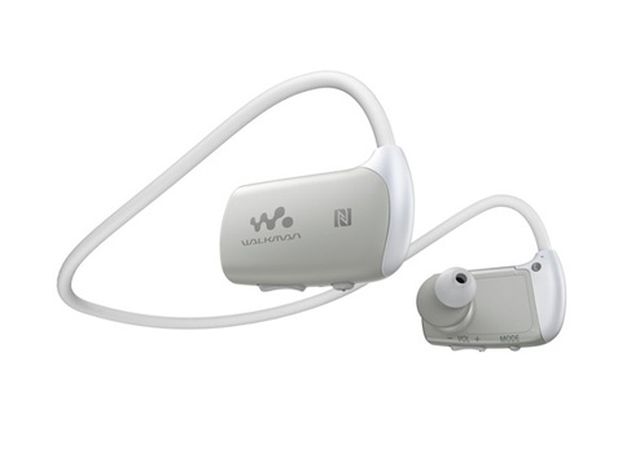 For water sports it’s also one of the best options because the model is protected under the standard IPX 5/8. The latter allows you to listen to music under water at depths of up to 2 m for 30 minutes. For professional swimmers is not a perfect example, because of their training much longer, but the fans of Sony WS613 fit.

Before us is not only a portable player, but also a full Bluetooth-headset with a microphone. The user 4 GB of memory for music. In the compositions of the player played in three modes: repeat, play back and mixed. To connect to a mobile device has Bluetooth enabled aptX and NFC. Maximum range is 10 m. The quality is mediocre microphone, all the interlocutors complained about the poor audibility. It also transferred the interlocutor quietly and expressionless.

There’s an app for devices on Android and iOS , with which you can control an MP3-player, adjust the equalizer, and so on. d.

The sound can be described as suitable for listening to music while you exercise. Neither of which sverhkachestve no question, the market quite suitable models for listening to music in a relaxed atmosphere for the same money. But during a jog or swim personally difficult to separate musical instruments on stage or to understand how overwhelmed mids. Similarly, the buyer should be aware that in the classroom we do not distinguish the sound of the set of nuances, for which you pay attention in a relaxed atmosphere.

What is important is the selection of ear cushions – the sound varies widely. Under the water is intended for use only this ear cups with a special film. Jogging ear pads is better to change the usual, because the film on watertight nozzles is a kind of filter sound waves and adds a low-frequency clapping with every jolt of the earth. Supported file formats is limited to MP3, WMA, AAC, and Linear-PCM. When using the Sony NWZ-WS613 as MP3-player device consistently works 8 hours, and as of Bluetooth-headset half – 4 hours. Charging takes place in the original dock. Fully charge the player from the computer can be 1.5 hours. Support for fast charging allows for 3 minutes to give energy to the hour of music playback.

Undoubtedly, the movement – this is life. So let’s make our movements more rhythmic and dynamic. This will help to devices such as Sony NWZ-WS613. Player is the perfect solution for sports people – eliminating the wires and gives comfort in any conditions. Yes, there are drawbacks. For example, I could not understand – why is the microphone if the quality does not hold water? But the pros outweigh. The week runs and visits to the gym, I stick with the player, and now back to the wired headset somehow does not hunt …