In 2015, the South Korean Samsung decided to leave practicality and asked for a spectacular appearance by releasing GALAXY S6 and S6 edge. However, the company believes this is not enough, because smart-assembled round the clock in the line Gear. The company introduced the toolkit developers, which confirms the innovative methods of the future management of the interface of the gadget.

A recent patent company, describes a movable ring around the dial, it will be implemented in future smartwatches Korean giant. This is confirmed by the description of SDK manual application interface. Touch screen that was obvious, too, it is still here and will be used on a par with the ring.

Judging by the content, Samsung is currently limited scrolling mechanism. Hopefully, the manufacturer or the developers will be able to figure out a way to diversify the usefulness of this mechanism, because otherwise the new solution will just avoid having to scroll through lists and screens, which can also be done in any smartwatches finger on the touch screen, albeit briefly overlapping information displayed thereon. 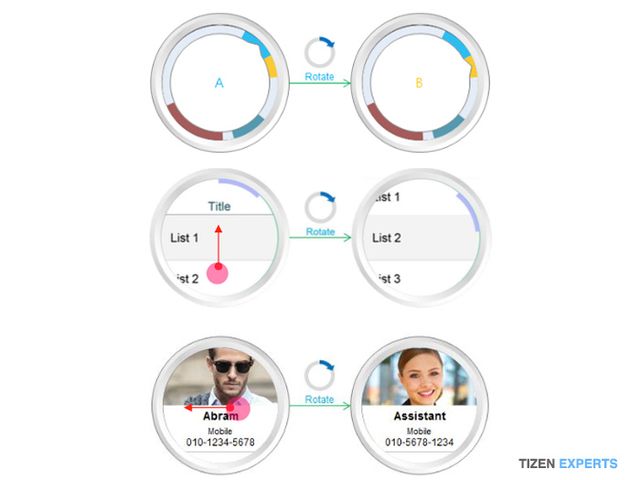 The market is already filled with devices with circular screens – Moto 360 (review), LG G Watch R (review), Huawei Watch, – and Samsung obviously will not be the first on the market. However devaysa has some potential, and not just because of the prevalence of gadgets on the market smarphones, but also an unusual approach to the interface of the system and the dominance of the major differences in the face of Android Wear proprietary OS Tizen.

However, Samsung, based SDK, continues to be restricted WebKit, which means that on the smartwathces will operate a web application. On the other hand, such a solution is a kind of industry standard, which can have a positive impact on the amount of software available for the gadget.