Again, power bank! But it is not normal, not just a box to charge the gadgets and rectangle profile! Device for games Ingress, who more than anyone else know that the battery capacity – the most important criterion when choosing a smartphone. And if you buy another phone is now not possible, then 20 bucks on power bank can always be found. 50 or if he style is just perfect.

The battery I gave  with the words: “See what it is all brilliant, certainly. There is still a diamond and some! “It was not brilliant, and the logo of the game Ingress. If you do not know, it’s a multiplayer game in which you have to travel around the city and search portals. The case is very quickly discharged smart, because you are constantly connected to the Internet, and display consumes the charge so that fans of the game the company released Cheero stylized device. 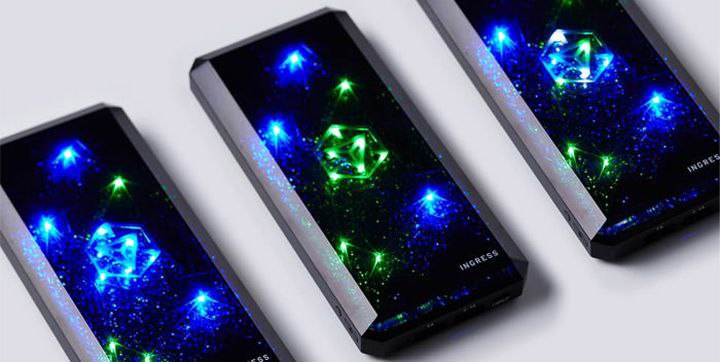 Ingress Power Cube and the truth is like a precious all such sparkling with lights, which glow in different colors, shine and shimmer. How it looks like, look at the video. Plastic that covers the light-emitting diodes, very quickly and easily scratched and damaged. It seems it can even air, so it is sensitive coating. 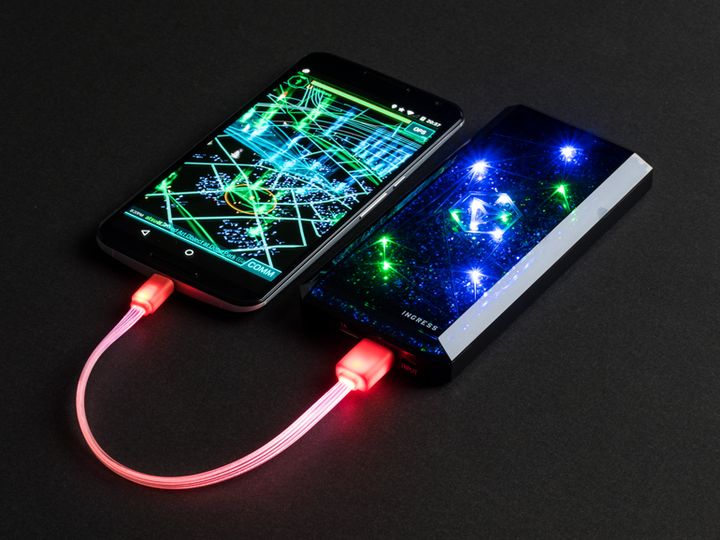 Therefore, the kit includes not only USB-cable but also to cover  two pockets. One can put the battery itself, the second wire or phone. Laces tightened on his hand and hung forward in search portals. Cover very cool, and if you wear it in the gadget, the battery will not scratch and will look like new for a long time.

Ingress Power Cube have only two buttons – for inclusion of the battery and to turn his lights. The logo will begin to light up after pressing the power button, want to change color – click on the small button again , and if you need to turn the lights shining on the perimeter – hold it. To begin charging, be sure to press the power button.

Battery can simultaneously charge two smartphones, one way to 1A, the second to 2.1a, will be charged using the included strap, microUSB port right there. 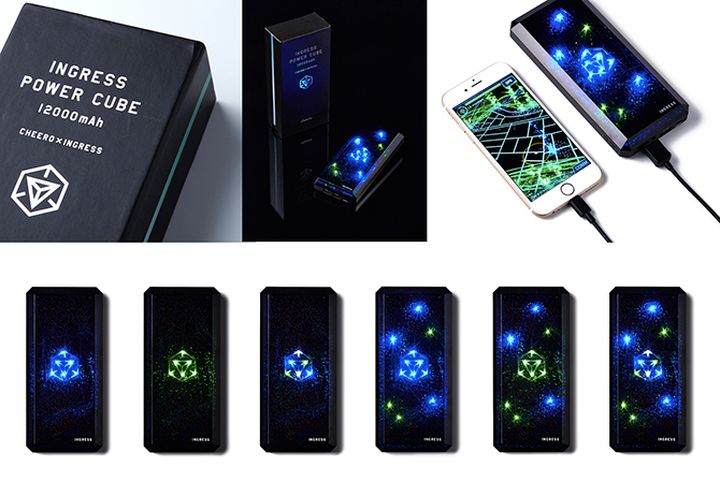 Producer on the box indicates the battery capacity of 12,000 mAh, but it is not quite true. The withered capacity of 12,000 mAh is at a voltage of 3,7V, as well as the output voltage of USB-ports 5V, the real capacity of the battery is less according to my calculations 8800 mAh. Charging enough for exactly 2.5 times to charge OnePlus One, which has 3100 mAh battery. That is, or my calculations are not quite correct or eaten straight as efficiency. Charges I Accum 8 hours, it is so much.

Buy Ingress Power Cube can be for $ 50 here. If you love beautiful things, you’re a fan of the game, or do you like Ingress cool covers, gadgets right to compulsory purchase. If you want the battery capacity maybe more, you can look at other.