Without exaggeration brand ASUS is able to compete with the leading companies for the production of tablets. Of course, users who are watching the emergence of interesting novelties recall appears in 2013, Nexus 7, which eclipsed all of its features competitive model. In the same “Opera” and ASUS Fonepad 7 (ME372CL) last year, well, this year there is the opportunity to meet with more advanced modifications – FE375CXG.

Like the predecessors, ASUS Fonepad 7 (FE375CXG) engineers have focused on the good quality of the gadget, along with the budget. At least at first glance, no complaints about the device not: neizbity color housing, IPS-display, productive filling, presented Intel Atom Z3530 processor and graphics PowerVR G6430, good autonomy. In addition, the tablet is able to call, and is equipped with two slots for SIM-cards, which can not please fans of tools 2-to-1.

Since we are dealing with planshetofonom, it should look appropriately, that is, to be as convenient as possible for web surfing, and for telephone conversations. First of all, we note that the tablet is quite thin and light, as evidenced by its dimensions – 194h109h10 mm, and weight – 299 g As usual, inexpensive device can not boast a metallic finish and a plastic, however, and he has a lot of advantages . For example, the rear surface is made in the style of «soft-touch», it is not easily soiled and thus practical. The top of the lid is located a large eye webcam, under it – the logo «ASUS».

By the way, there are four color variations rear surface: white, gold, black and red. In the first two cases, the display is a white frame, the rest – black. 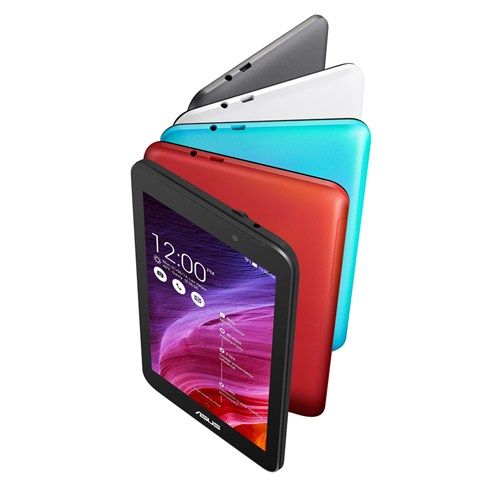 Incidentally, the faceplate. Of course, most of it takes the screen, which is surrounded by a fairly narrow outline. Vertical orientation, so the top and bottom of the display frame is much wider than the right and left.Below – another manufacturer’s logo beside it – model, under which is hidden speaker. Another – at the top, next to the front webcam and brightness sensor.
Do not leave without attention and build quality that is worthy of praise: all the details of quality are interconnected, no backlash, as well as scratches. Thus, the appearance of the ASUS Fonepad 7 (FE375CXG) not reproach: Though its design does not look expensive and respectable, but it is perfect for every day.

Glossy screen device, and its diagonal, as the name implies, is 7 inches. Display resolution – 1280×800 pixels, pixel density – 216 ppi, a kind of matrix – IPS. The front panel of the tablet boasts a good viewing angles, even in the absence of an inversion of severe deviation. These important characteristics as color and brightness of the rose to the occasion. As a result, the image juicy and rich colors – uniform over the entire surface.Do not let down and contrast, its figure was 1,100: 1.
A few words about the brightness of the display: it can be adjusted automatically or manually, and its maximum value does not exceed 370 cd / m2. Setting fires is quite correct, successfully adapting to the degree of illumination around. I would also like to note the presence of the program for the calibration of the screen titled «Splendid», with which you can adjust the different color characteristics, such as saturation, depth, etc. 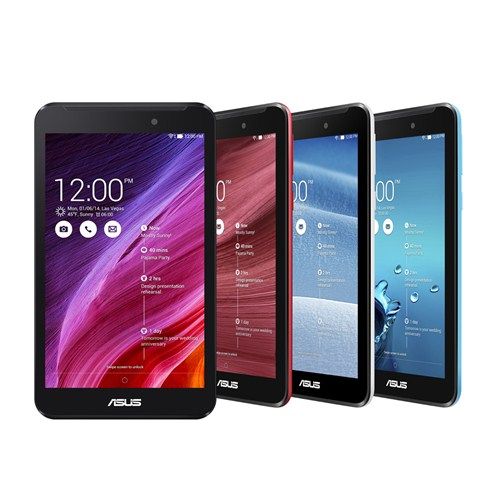 Note also the fact that the screen has a fairly good oleophobic coating, so that even fingerprints remain, but it can be easily removed. By the way, gloss still contributes to the appearance of glare is thus better gadget not work in the sun. At the same time, the sensor is responsive enough to the tablet, there is no need to repeat the command, everything works quickly and accurately. The display supports 10-finger multitouch.
The Tablet PC provides two cameras, resolution is 0.3 megapixel front and rear – 2 megapixels. The first can be used to communicate in Skype, the second left her near: although she allows to take pictures, but the high quality they obviously do not pretend. However, some models can be installed main camera with a resolution of 5 megapixels and autofocus. With her shooting will be better.
Two speakers are located on the top and bottom of the framework with respect to the display. They are hidden under the perforated gratings are small, but do not let that bother, because the sound quality is good, even at maximum volume.

Since we are dealing with the tablet, the physical keyboard can not be here. Instead, there is virtual, it is very easy to use. It is easy to switch from literal to a digital layout, and vice versa. The keyboard has large buttons, perfectly adapting to the screen. Physical keys are not provided, but there is a sensor, in this case – “Home”, “Back”, “Menu”.

Tablet PC ASUS Fonepad 7 FE375CXG-1A018A comes with the operating system Android 4.4 KitKat, which, in turn, is “dressed” in its original wrapper ZenUI. It is clear that software preinstalled abound for comfortable work, however, because of too much memory, and freezes are not excluded. 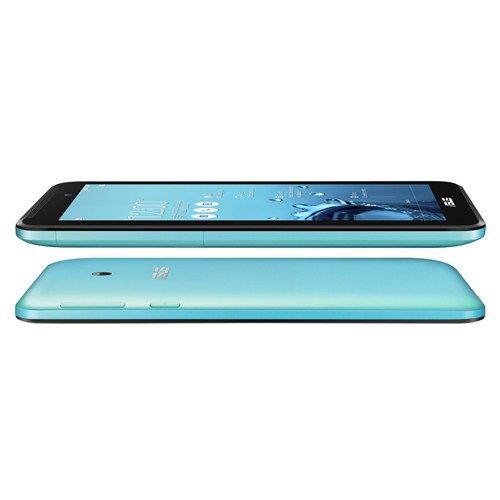 Go directly to the stuffing. It is based on quad-core SoC Intel Atom Z3530 clocked at 1.3 GHz. It is made of 22-nm process technology and has received 2 MB cache level 2. Graphics PowerVR G6430 shows good results, because in tandem with the CPU it is able to run most modern games, for example, Asphalt 8. The card made ​​on 28 nm process technology, supports OpenGL 3.0 and DirectX 10.

RAM is available only in the standard 1 GB DDR3. The internal memory of 8 GB, but it can be increased to 64GB using built-in memory card reader microSD. If in this case the volume is not enough, you can use the repository ASUS Webstorage. At your disposal will be 5 GB of free space in the “cloud” that in the first year is complemented by an additional 11 GB.

Since the device is positioned as planshetofon, it is not surprising that the interface had had more than the usual tablet. On the right side – two physical buttons for inclusion gadget adjust the volume. Immediately struck by the fact that the keys are closer to the cover, at first it can cause discomfort.
On the left side – a long cap, under which there are two card slots and a micro-SIM card reader microSD.

On the downside, his place was taken by audio jack for headphones, and at the top – Port Micro-USB 2.0.
No manufacturer has bypassed attention and sensors. In the case of ASUS Fonepad 7 (FE375CXG) to the user receives: accelerometer, light sensor, proximity sensor and a compass. As for the wireless protocols, in addition to a standard Wi-Fi 802.11b / g / n and Bluetooth 4.0, GPS is provided with A-GPS, GLONASS, as well as 3G. In addition, the technology of wireless video transmission Miracast. Of course, the gadget can be operated not only as a tablet but also as a smart phone, you need only activate one or just two cards for mobile communications, inserting them in the slot for the micro-SIM-cards.

The gadget was 3-cell lithium-polymer battery capacity of 15 Wh. Engineers ‘predict’ him about 11 hours of life, and talk even more – 21 hours. In fact, the device shows excellent results, which in many ways ahead even more expensive competitors. In the Web-surfing tablet really works about 11 hours, however, in the performance of complex tasks, it discharged twice as fast. Overall, a reasonable approach, Fonepad 7 (FE375CXG) can work a whole day or even a day on a single charge. 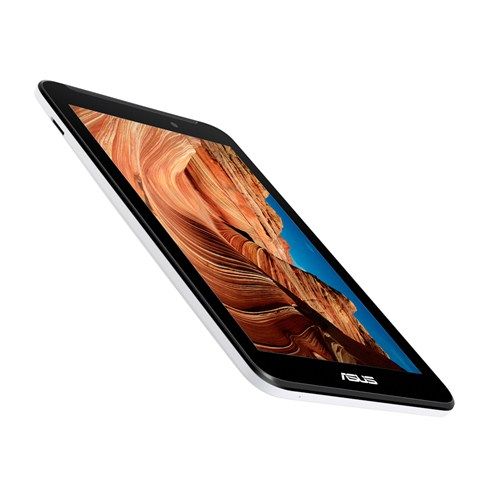 So, we met with a very interesting product – a tablet ASUS Fonepad 7 (FE375CXG). Its main feature is the ability to call and provided for this purpose the two “Simcoe”. In addition, the device offers an attractive design with a choice of different colors, modern filling and high-quality IPS-screen. Many certainly appreciate the variety of software that extends the capabilities of the device.

The obvious drawback of the tablet can be called a small amount of RAM – only 1 GB, which can not but affect the quality of work. However, on the other side of the scale – the undeniable advantages of buying the gadget, which include the price – $ 230 for the complete set described.