Jeff Anning once sat on the beach and watched the movement of the waves of the warm twilight one evening in 2008, when someone “buzzed” by his long board with wheels, which was installed motor. And the moment was truly the key to it all started, as was laid down in the fertile soil of the creative seed of his many years of work on the creation of an electric skateboard, which he called Evolve 2 in 1 Carbon. Since launching its first project – Electric Pintail in 2012, the designer continued to refine his idea of what the electric skateboard should be.
This process culminated with the appearance of a series of boards Evolve 2 in 1 Carbon. For one, he created a small first company, which later became the biggest seller in some respects. After the appearance of the first information about the board, of course, besieged by journalists on a regional scale was not because they were given the opportunity to personally ride on board, to assess its handling and to share with their readers and viewers impressions. As it turns out, is quite tolerable vehicle for regular use. 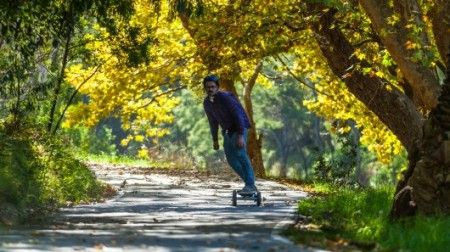 “My inspiration required to create a certain electric skateboard, which is not like an ordinary electric skateboard,” explains Anning. 36-volt lithium-polymer batteries are built into the board from a compound of carbon and Kevlar. The length is 43 inches (111 cm) and weight – 10.5 kg. Carry is not very easy, but the ride – it.
The estimated cost is currently estimated at US $ 1,500. Solid enough price, but given that there you can drive about 7-8 miles at a speed of 16 km / h along the paths for pedestrians or cyclists in the absence of heavy traffic, it will help sekonoit a lot of time on the way to and from work.